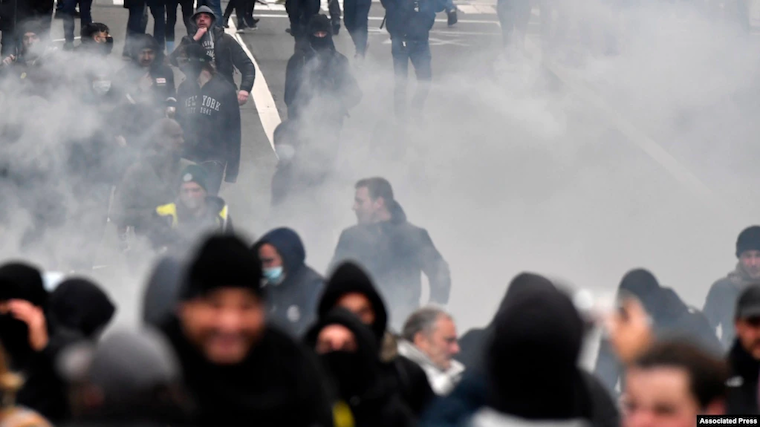 Riot police use tear gas to disperse demonstrators during a protest against coronavirus measures, in Brussels, Belgium

Belgian police used water cannon and tear gas on Sunday to disperse some rowdy protesters in Brussels after most demonstrators marched peacefully to protest tightened COVID-19 restrictions that aim to counter a surge of coronavirus infections.

Thousands came to reject the new measures announced Friday, the third week in a row that the government has tightened its rules as an avalanche of new cases strains the country's health services, depriving people with other life-threatening diseases of treatment.

Shouting "Freedom! Freedom!" and carrying banners that said, "United for our freedom, rights and our children," protesters marched to the European Union headquarters. Some also carried signs critical of vaccines and against making vaccine shots mandatory.

The main crowd in Sunday's mostly peaceful march had already dispersed when about 100 protesters ran into a riot police barricade cordoning off access to the European Commission. After a brief stand-off with police, protesters hurdled trash and other objects, including a bicycle, at police and set off firecrackers and flares. Police used water cannons and fired tear gas to disperse the crowd. There were no immediate reports of injuries.

On Friday, Prime Minister Alexander De Croo announced that daycare centers and primary schools will close for the holiday a week early, and children must now wear masks from the age of 6. Indoor events will only be allowed with a maximum of 200 people.

Previously, the government closed nightclubs and ordered bars and restaurants to shut at 11 pm for three weeks. Speculation had been rife that closing times would be brought forward to 8 pm but the cabinet decided against it.

According to the latest coronavirus figures, the EU nation of 11 million appears to have reached a plateau. On a weekly average, 17,862 new daily cases were reported in Belgium, a rise of 6 per cent over the previous week.

Hospital admissions rose 4 per cent. More than 3,700 people are hospitalized with the virus, 821 of them in intensive care. More than 27,000 people with the virus have died in Belgium since the outbreak began last year.