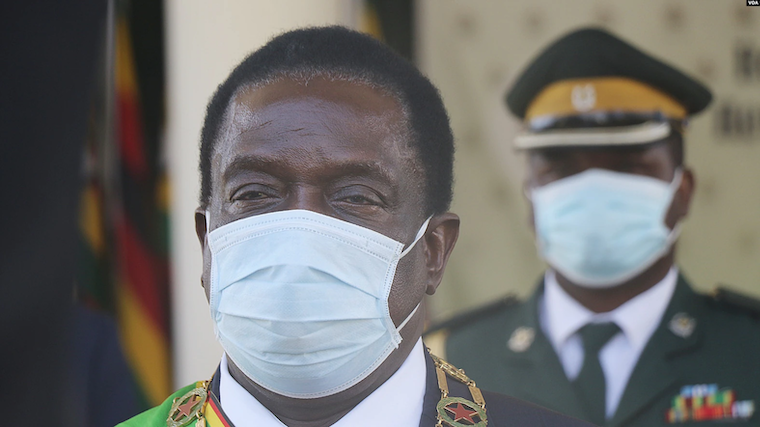 Zimbabwe has announced a nine-hour curfew and compulsory 14-day quarantine for anyone arriving in the country, to prevent the spread of the Omicron variant of the coronavirus.

Zimbabwe is the first country in southern Africa to enact such restrictions since the emergence of the variant, which spreads more easily. The rules come just ahead of the holiday season when many Zimbabweans living abroad hope to return home to visit family.

President Emmerson Mnangagwa, in a televised address Tuesday night, said the government was closely monitoring what he called an “ominous development” following the discovery of the Omicron variant in neighboring South Africa.

“Government has decided on new enhanced measures to strengthen our national response and to protect our nation from impact of a likely fourth wave which the new variant omicron will most certainly aggravate," said Mnangagwa.

"With immediate effect, the following measures will now apply: All returning residents and visitors have to undergo PCR testing and will be quarantined at [their] own cost for days recommended by the WHO, even if they present a negative PCR test result from elsewhere.”

Opposition MDC Alliance Vice President Tendai Biti immediately criticized the new rules, saying on social media he had been left “hopeless” after a “loony decision made” by the government.

Dr Norman Matara, the head of the Zimbabwe Association for Doctors for Human Rights, says the government has been proactive in trying to keep omicron - initially named B.1.1.529 - from crossing the borders.

“But we are also worried by the restrictions, especially the decision to quarantine returning residents, citizens and also travelers who test negative for COVID-19 with two PCR results," said Matara.

"We think that these restrictions are nothing more than punishment. They are just knee-jerk decisions based on emotion rather than scientific evidence or common sense. They also destroy tourism sector and business in Zimbabwe.”

Independent political commentator Kudzai Mutisi concurs that the measures are too harsh and will put more fatigue on the vaccination program in Zimbabwe.

“You promote vaccination by incentivizing vaccination. So, if someone has been vaccinated you try to reduce inconvenience to them," said Mutisi.

"And you put inconvenience to those that have not vaccinated; that way you push people to get vaccinated, because we are no longer in the era of lockdowns, lockdowns were there before we had vaccines, lockdowns were there before we knew about this virus – now a lot is known about this virus, and we now have vaccines. So, it is time to vaccinate and not to lock down.”

Zimbabwe has fully inoculated just above 2.8 million people since February, when it began its vaccination program to contain the COVID-19 pandemic. The government wants to vaccinate at least 10 million Zimbabweans by the end of the year, a figure which some say might be difficult to reach given the scarcity of resources and short time left.

President Mnangagwa said he would review his new measures to contain the omicron variant after 14 days.