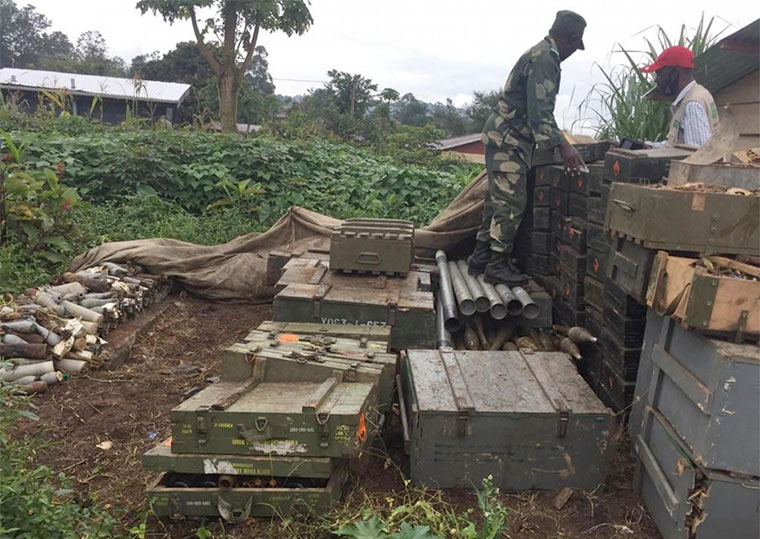 According to Léon-Richard Kasonga, spokesman for the Congolese army, after a successful air bombardment at several ADF positions in North Kivu and neighbouring Ituri province to the northeast of DRC on Tuesday, the infantry troops have now jointly begun a ground action against the enemy.

“After this systematic shelling of the two armed forces, we located with our technological means and with the support of partners, we struck these places," Gen Kasonga says.

"After these strikes, the infantry troops on the ground began to advance. After hitting a target and bombing, you have to go and see what happened to see if the enemies are neutralized.”

New Ugandan army troops crossed the Congolese border at Nobili on Wednesday in a convoy of several vehicles, according to local witnesses. According to witnesses, Ugandan soldiers crossed the city of Nobili and the locality of Kamango, about 10 kilometers by road from the border, before settling in the village of Mukakati.

Patrick Muyaya, Congo minister of Communications and Media defends Uganda’s troops crossing to Congo saying that both countries so far have a common enemy who is a terrorist and has no borders.

He said: “We all know we have a difficult past with our neighbors. The mechanism that we put in place with Uganda, we had also put in place with Rwanda. Our security and theirs depend on the nature of our collaboration. We don't forget anything about our past. They and we have a common enemy who is terrorist, who has no borders, who decimates both in Uganda and at home," Muyaya explains.

The United Nations Organization Stabilization Mission in the Democratic Republic of the Congo (MONUSCO) and Civil society in the Watalinga chiefdom near the border with Uganda and locals have welcomed the offensive action by UPDF and FARDC against rebels.

Mathias Gillmann, the spokesperson for the UN Mission in DR Congo says that joint military operations launched by the troops resulting from bilateral decisions between DR Congo and Uganda are decisions that MONUSCO respects.

Gillmann says that the coordination of these operations will make it possible in particular to see how the MONUSCO force can complement the efforts made and be useful in the fight against the ADF in the new approach.

Mabele Musaidi, the vice-president of Civil Society in Watalinga chiefdom says that even if Ugandan soldiers had entered in disorder on Congolese soil, he would still support the move because what they need is peace.

“We support this entry because we need peace. But we deplore the fact that these people (UPDF) got in a mess. There are those who passed through Bahumu and others officially at the Nobili border. But also we do not know that it was the collaboration between our FARDC in Kamango and those who are in Bwisegha," Musaidi says.

Jospin Dongo, a resident in Nobili says that he is happy with the offensive against the ADF and expresses hope that the operation would open the way to peace. Mugisa Kitambala, another resident says that the main thing as far as he is concerned is that they have peace once more.

He says: "The main thing as far as I am concerned is that we have peace once more. But they also have to tell us how long the mission will last and how many (troops) have entered, so that at the end, we can know that they've gone home,” Kitambala says.

DRC’s Catholic Church says the ADF has killed about 6,000 civilians since 2013 while a respected monitor, the Kivu Security Tracker, blames it for more than 1,200 deaths in North Kivu’s Beni area alone since 2017.

The Ugandan authorities recently accused the ADF of carrying out or planned attacks. On November 16, four people were killed and 33 wounded in twin suicide bombings in Kampala, which police attributed to a “domestic terror group” linked to the ADF.

In late October, the Ugandan police said they had arrested suspected ADF members, who they believed were plotting a new attack on “major installations”.

Uganda has also blamed the ADF for a foiled bomb attack in August this year on the funeral of the former deputy inspector general of police, Maj Gen Paul Lokech. Three suspects were charged with terrorism on November 5 in relation to that incident.

An internal job to justify invasion of DRC and loot it of its natural resources?
Report to administrator
0 #2 kabayekka 2021-12-03 01:02
It seems these two countries have been hiding money from the national treasury to open up a war after the end of several COVID19 lockdowns.

Wars do not benefit any one. It is high time Allied Democratic Forces and the National Resistance Movement sat down together in a neutral country like Kenya and started to mediate to sort out their African democratic differences.
Report to administrator
-2 #3 Webz 2021-12-03 08:45
UPDF in the recent past entered and neutralized Joseph Kony's LRA in the impenetrable forests of DRC and Central Africa.

If the results this time round were the same against the the IS affiliated ADF well and good. Meanwhile we wish them the desired success.
Report to administrator
0 #4 Dr Noord 2021-12-03 11:20
I never know any serious DRC President, who even witnessed how Museven deposited the Mubutu and Disiere Kabira's Governments respectively, could allow such huge ammunitions to close the borders into the Congo territories.

Museveni is much untrustable, yet his only dealing favored to keep that sit was shown an exit.
Report to administrator
-3 #5 Wainanchi 2021-12-03 14:18
I will.just ignore all those thugs who always attack Uganda.

Now is the time to kill and capture all those animals and butchers who cowardly attack people and kill them for no reason.

Ugandans MUST stop Museveni in UNITY, or they are doomed for good!

Congolese & Ugandans must know that Kagame, Museveni & Kabila will never leave them at peace, unless the 2 people get control of their lands & govern correctly!

Have Ugandans even asked who ADF rebels are, who they are fighting for, why they want Museveni out?

Either Ugandans say NO to the tribalistic system & UNITE to block Museveni & leave him no other option but to leave, or the demon will be replaced by ADF rebels fighting to replace him!

Don't forget that it's 'the people' who have the power, in UNITY, to stop demon rulers, rebels!

Museveni is fighting for his post & ADF want to replace him, right?

It's time Ugandans say NO to the tribalistic system & UNITE, so that they are not ignored by the outside world any more, especially when ADF wants to replace Museveni!

Ugandans, in UNITY, are the only ones who have the POWER to save themselves from Museveni, ADF...!
Report to administrator