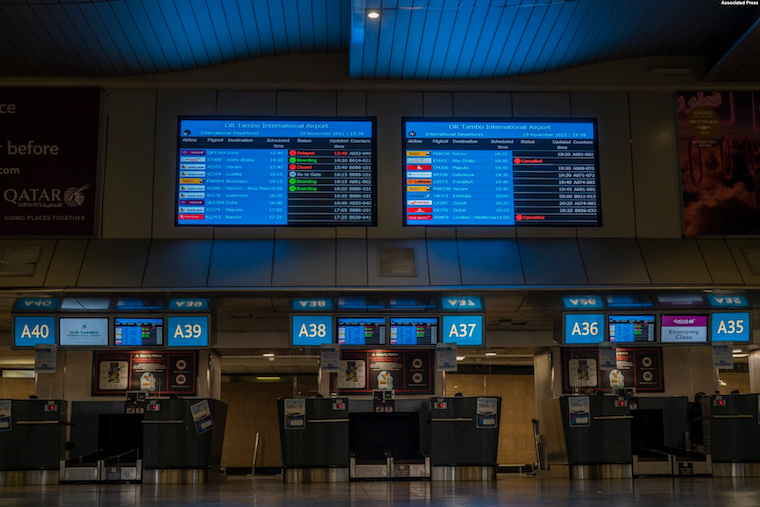 UN Secretary-General Antonio Guterres said Wednesday that southern African nations that first detected the omicron COVID-19 variant are being collectively punished with travel restrictions, and he urged “common sense” to respond to the new variant.

"What's unacceptable is to have one part of the world — one of the most vulnerable parts of the world economy — condemned to a lockout when they were the ones that revealed the existence of a new variant that, by the way, already existed in other parts of the world, including in Europe, as we know,” Guterres told reporters.

He appealed to the more than 50 governments that have imposed travel restrictions on visitors from South Africa, where scientists first reported the omicron variant on November 24, according to the World Health Organization, and seven other African countries, amid concerns the new mutation is highly transmissible.

“This is a very strong appeal that I launch, an appeal to common sense,” Guterres said. “We have the instruments to have safe travel. Let's use those instruments to avoid this kind of, allow me to say — travel apartheid — which I think is unacceptable.”

“We’ve seen as a result of being transparent that most of Africa has been subjected to sanctions — flights between this region and a certain number of countries have been banned, and that is regrettable,” Faki said, condemning the measures as unjustified.

He noted that less than 6 per cent of Africans are fully vaccinated because of unequal distribution. WHO said Tuesday that blanket travel bans will not prevent international spread of the variant and could hurt the global COVID-19 response because it will discourage countries from reporting new variants.

WHO urges all travelers to adhere to mitigation measures, including getting vaccinated, washing hands and wearing masks.

They may be thinking that the new variant is the ultimate nail on Africans but they will be surprised. With or without the travel ban the variant may reach them and God forbid! it may be worse for them.
Report to administrator
0 #2 Uhuru 2021-12-03 00:20
Quoting Einyu Felix:

The West has always wished Africa bad, in fact I am sure they are surprised that Covid did not wipe Africans as they had speculated.

They may be thinking that the new variant is the ultimate nail on Africans but they will be surprised. With or without the travel ban the variant may reach them and God forbid! it may be worse for them.

You are spot on. I would like to urge African counties to scale back isolation and genomic sequencing of coronavirus.
Report to administrator