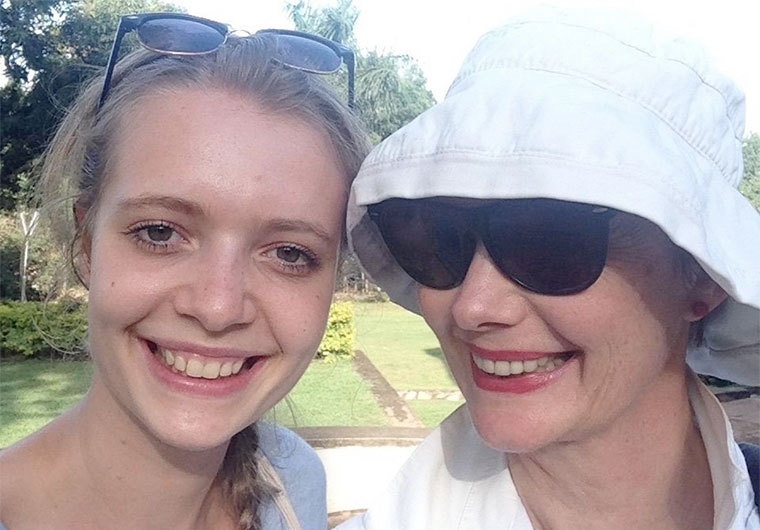 Marije Slijkerman has so far made 18 trips to Uganda from the Netherlands in search of her daughter who went missing in 2015. Sophia Isabella Federika, a former medical volunteer with Rubaga hospital in Kampala went missing from the Students' Education Centre at Murchison Falls national park on October 28, 2015.

Sophia checked in at the Student’s Education Centre on the fateful Wednesday in the company of two other people. She, however, reportedly left her friends in the room to go to the latrine in the confines of the center but never returned. Ugandan security, Uganda Wildlife Authority (UWA) rangers, Dutch police, and her family mounted a search for her but to date, Sophia is still missing.

Only her belongings were recovered near the river in the park, albeit in pieces. Pieces of her loose summer trousers were scattered all over the bush near the park, her undergarment hanging on a tree, prescription sunglasses, boots on the grass, a yellow insole, and her African fabric medium-sized handbag left more questions than answers. The items were discovered 24 hours after Sophia’s disappearance.

Slijkerman believes this could have provided more clues on the whereabouts of her daughter. Despite the uncertainty of finding her missing daughter, Slijkerman is not about to give up until she gets some kind of closure. Slijkerman has even met President Yoweri Museveni, top army generals, security officials, and local leaders in her quest to find her daughter in vain.

Speaking to URN with tears rolling down her eyes last week, Slijkerman, said that to date, she is still in a state of shock, disbelief, and numbness on what could have happened to her daughter. She, however, has a strong feeling that someday, her daughter will show up. She revealed that they have tried to memorialize her daughter in all ways they can, but her life has never remained the same.

According to Slijkerman, pleasure and joy are meaningless in her family given the prevailing circumstances surrounding her daughter’s disappearance. Slijkerman says that even in times when they try to move on, something about Sophia and her whereabouts comes into the picture and changes everything.

Not knowing where Sophia is or even how she is being treated and whether or not she is still alive six years later is the toughest thing Slijkerman has had to deal with. Life in its self seems meaningless and has become an emotional roller coaster.

Slijkerman knows that she is not alone, arguing that many other people have missing relatives or friends. She says that her toughest moments are when she thinks about the possibility that her daughter is being held by a kidnapper, rebels, or a notorious gang and is being mistreated or even sexually exploited.

“If a child is knocked dead by a car, you can never get over it, but you know what happened, you can say your final farewell and you can find some form of closure,” she said. She, however, says that she is struggling with a challenge of lack of closure.

"A missing child is something you cannot compare to anything else. Losing a child is the worst thing that can happen to any parent. But knowing what happened to your child at least gives you some form of closure and you can try to live with that. Missing your child, not knowing what happened, if they are still alive or not is torture every day. It is continuous torture, it eats at you every day, you wonder is she alive, where is she? Is she free to move? If so why wouldn’t she contact us? And if she is not free to move under what circumstances is she living? and I try not to think about that too much because I think it would literally drive you crazy," Slijkerman.

Slijkerman says that Sophia was an intelligent girl who thrived and scored highly in Mathematics. She worked together with her father who is a mathematician as well. Sophia believed in getting the best work and internship experience in rural and urban Uganda. Many of the people she worked with referred to her as a doctor born naturally.

Sophia had planned to spend eight weeks doing her internship, another 17 days traversing the country before flying back to the Netherlands. Her mother instead takes trips yearly in her search. She says as a mother, she does not have the feeling that her daughter is gone.

Today Sophia’s mum feels more should be done despite conclusions that her daughter could have been involved in an accident, fell into the river, or devoured by wild animals. Although the search for Sophia seems unsuccessful, Slijkerman thinks her missing child's story should be told several times until she returns home one day.

In as far as investigations are concerned, Sijkerman, says that they have never got any lead despite meeting with security officials, the president, and people on the ground. She says she hopes one day there will be a ray of hope when Sophia returns.

Slijkerman says that although the investigations were going slowly, her meeting with President Museveni in January 2020 helped expedite the investigations. She hopes that the search for her daughter can continue when the pandemic is finally defeated.

Crocodile case here we are dealing with. You can't swim in an infested nile for sure

But Drew Rukiga, was there bloodstain anywhere? Unless there are tree-climbing Crocodiles; how did e.g. the girl's undergarment end up hanging from a tree, her prescription sunglasses, a yellow insole, boots and her African fabric medium-sized handbag strewn on the grass?

In other words, unless it was a foul-play or suicide, crocodiles do not eat their prey on land or from trees, but from the safety of the waters where they are experts in drowning/suffocating the catch.

Otherwise, the garments would been found downstream.
Report to administrator
0 #8 Bowers 2021-12-03 21:33
It's a shame that such a promising young person can simply vanish into thin air under dubious circumstances.

How I wish she would come out one good from wherever she may be. Take heart, mother✍️
Report to administrator
0 #9 Mwanje Nicholas 2021-12-04 09:46
@Lakwena
A crocodile is big enough to swallow a human being and leave no trace of blood.

Let's hope shes' alive
Otherwise 6 months if she were out there, someone would have talked,
Report to administrator