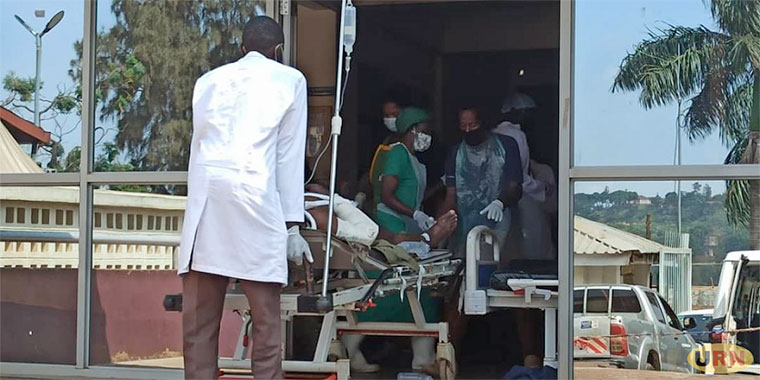 A bomb blast victim being wheeled into hospital

The mid-morning bomb explosions at CPS, Kampala, and at the Inspectorate of Government office on Parliamentary Avenue on November 16 are still a nightmare for some, especially victims still nursing injuries in hospital.

Matthew Adeun, one of the 27 policemen injured in the bomb explosion at Kampala Central police station, CPS, is still lying in hospital stuck with a pile of medical bills.

The family is struggling to buy prescribed medicines that aren’t dispensed free of charge at Mulago hospital. At Mulago, Adeun is under the care of his pregnant wife Lucy Nake, and their three-year-old boy. The boy is battling a bout of malaria.

In a sit-down interview with Nake at the hospital, she painfully told the harrowing ordeal of looking after Adeun, the family’s sole breadwinner.

Savings from the police Savings and Credit Cooperative Organisation, SACCO, salary, and contributions from family members and well-wishers have run out. Nake keeps a counter-book. She records every contribution and also keeps receipts she hopes to present to police authorities for a refund.

“...we have been told to spend all the money and keep the receipts. When he recovers, we shall take the whole bill with these receipts to police for a refund...”

The day the bombs exploded, I was at school in Napak (north eastern Uganda) where I work as a teacher. I had talked to my husband that very morning at 8:30 am. At 10:03 am, the bombs went off. Adeun’s friend called me. He wanted to know whether I had talked to Adeun that day.

I said I did earlier in the morning. The friend kept calling Adeun’s phone until a doctor answered and told him that my husband was among the group that had been bombed. The doctor told him to go and attend to him. The friend called our brother in Makerere who rushed to Mulago. At Mulago, they found Adeun had been taken to the laboratory for tests.

Later he was wheeled into the theatre for an operation. He was then transported in an ambulance up here (New Mulago ICU ward). I reached here at night and found him in a very terrible condition. He was not talking. He couldn’t identify anyone. His eyes were closed and mouth wide open and I asked myself, “Is this man going to survive?”

I just started crying. From Tuesday, November 16, 2021, I did not see any policeman come here to check on us till Monday, November 22 when we started to follow up to get some assistance from the force.

“...The doctors could tell us to go and buy drugs worth Shs 100,000, Shs 60,000, Shs 40,000, and the money we had, got finished. We had Shs 4 million. Shs 2 million were contributions from family and friends and the other Shs 2 million was withdrawn from Adeun’s account. We spent all the money on buying drugs, food, beddings, and other things the doctors asked for,” she said.

On Monday, November 22, the doctors told us to buy drugs. When I reached the pharmacy and calculated the money needed to buy drugs, it was Shs 1.5 million yet we had remained with only Shs 300,000 on the account. We called people at home and they sent some money but it was not enough to buy all the medicine we needed.

We called [John Bosco] Ngoya, the MP from Napak and he said he was coming to take us to CPS but he delayed. We called Faith Nakut, the Napak District Woman MP, who came and saw the patient

We went to CPS and explained everything to them. They gave us a form and told us to go and get it stamped at Katwe police station. But when we reached there, they asked if we had received the Shs 300,000 given to all victims and we said no. We were sent to Wandegeya police station where we got the Shs 300,000. We topped up and bought the medicine.

That very day, we went to Naguru police headquarters to withdraw the patient’s SACCO savings. They save Shs 50,000 every month. Adeun assumed he had Shs 2 million in savings because he had never withdrawn any money but when we reached there, the account had only Shs 1.3 million. We were allowed to withdraw Shs 1.2 million. That is the money we are using right now.

Even as she seeks specialized medical care for her husband at Mulago hospital, Nake is weighed down by the bills. “... I don’t know who is going to pay for the hospital bills because we were told that they charge Shs 1 million per week for the ICU room that doesn’t include the fees for the theatre, drugs, and x-rays. What if we spend more weeks here, who shall pay?”

“On Thursday, November 25, I received a call from CPS. I went there and received soap, sugar, posho, rice, cooking oil, and drinking water for the patient. I also received a team from CPS led by the Regional Police Commander (RPC) who came to see the patient. I laid out all the expenses we are incurring and they told me to keep the receipts so that when the patient recovers, we claim for the money,” she said.

The Observer has learned that police have contributed only Shs 600,000 to the Shs 4 million the family has spent on buying medication from private pharmacies. That includes the initial Shs 300,000 given to all the victims and the Shs 300,000 the CPS team gave Nake.

“He can at least try to talk and recognize people he knew before,” she said.

“...he still has a major hearing problem because of the wound on the head, which had to be stitched from the forehead to the right side of the ear. His left side is still paralyzed and sometimes he loses memory. He forgot the password to his phone. He cannot lift his legs. If you pinch him, he doesn’t feel anything. Doctors have told me to give it time for the whole body to get better...”

Interviewed for comment on Monday, November 29, Police Spokesperson Fred Enanga said there are only two police officers who are still in the hospital. The rest, he said, were discharged. He also roundly denied Nake’s claim that the victims’ relatives are paying the hospital bills.

Asked on the same day, Monday, to respond to Enanga’s assertions, Nake told The Observer that her husband, Adeun is still at Mulago. She said Adeun had been moved out of the ICU ward and relocated to another ward at Mulago hospital.

“I have been invited to the police headquarters at Naguru but the patient is still at Mulago. He has only been removed from the ICU ward though the hospital has not given us any treatment bills,” Nake said.

WHAT OTHER POLICE OFFICERS SAY

During last week’s interview with The Observer, Isaac Ekip, one of the survivors of the CPS bomb blast, said they were not given any medicine after they were discharged from Mulago hospital because the hospital did not have the drugs. Ekip said, “...After the treatment at Mulago, I was prescribed some medicine upon being discharged which I was told I had to buy for myself from outside because it was not available at the hospital. Right now what is worrying me is the hearing problem, which I am taking medication for but the doctors told me that if the dose gets finished without any improvement, I will require getting further treatment...” Ekip said.

Ojangole Micheal (not real name) says the police should have better ways of handling such emergencies because
the policemen were injured in the line of duty. He said, “...what we want from the police administration is better handling of these emergencies where their officers are involved...”

MPs; Faith Nakut (woman representative for Napak) and John Bosco Ngoya (Bokora County) said they visited the family of Adeun and other survivors. They said the families were struggling to pay the hospital bills and the high costs of living in Kampala.

Nakut said, “... I visited the hospital and one of my constituents Adeun and two of his colleagues were in ICU. It was clear that the families were struggling to find resources they needed to buy supplies and other consumables in the ICU required to be administered to the patients. They have already spent a lot of money and you know police officers do not earn that much yet you expect them to save money to prepare for emergencies of such a magnitude which is very wrong...”

Bosco Ngoya said the uncoordinated police assistance to the injured officers was causing pain to the survivors and their families. Ngoya said, “...The problem with this police thing is the many departments. This one says contact the one in charge of health. The one in health says no, it’s welfare and that one too says contact someone in charge of Mulago, and the line continues without getting help for your person...”

The MPs recommend that police take over the welfare costs for the period the survivors will be in hospital and also clear all the expenses incurred by the families. Nakut said, “...Uganda police needs to borrow a leaf from UPDF and institutionalize care of officers that get injured at the place of work. ”

Exactly; like the saying goes; "Ki lagwok man ki cet tere." (Every dog takes care of its own s..t".)
Report to administrator
12