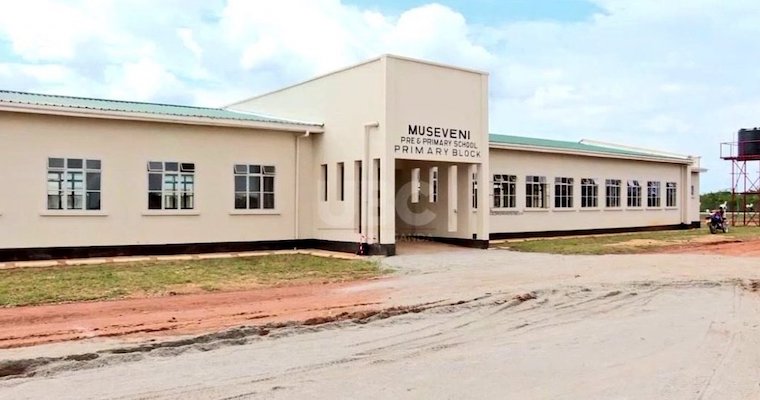 “Once you show me space or land, I will build seven classroom blocks to educate our children. To me, this is like home. I feel happy whenever I am here,” President Yoweri Museveni once told the people of Chato, Tanzania in 2019. On November 29, 2021, President Museveni delivered his promise when he launched Museveni Primary School (Museveni Shule ya Msingi) at Nyabirezi, Chato district, Geita region, Tanzania.

According to Tanzanian President Samia Suluhu Hassan, the school has cost US$1.673 million to complete. The construction works began on February 11, 2020, and ended in February 2021, a month before the death of former President John Pombe Magufuli.

This is the third and most expensive school that Museveni has built-in Tanzania. During President Benjamin Mkapa and Jakaya Kikwete’s reigns, President Museveni built two schools, one at Muhutwe Kamachumu and Nyamiyaga Murongo in Kagera region.

Museveni explained that he decided to build those two schools as a token of appreciation for the sacrifice made by the residents of Muhutwe and Nyamiyaga during the 1979 war against President Idi Amin Dada’s government. In 1999 while celebrating the 20th anniversary of the overthrow of Idi Amin’s government in 1979 by a combined force of Tanzania Peoples Defence Forces ( TPDF) and the exile force of Uganda National Liberation Army (UNLA), Museveni requested President Benjamin Mkapa to allow him to visit the homes of people who helped them during the war.

“While at Kaboya military camp, I asked President Mkapa to allow me to visit Mzee Zacharia Masudi’s home at Muhutwe a place where we planned our war in 1978. Again I asked him to visit another place near the border (Mutukula). I was there on December 23, 1978. There was a small two-room grass-thatched school. So, I asked brother Mkapa to allow me to build two schools in memory of the sacrifice of these people made for our liberation. That is how those two schools at Muhutwe and Nyamiyaga were built,” he explained.

“It was a monument for our brotherhood and friendship,” he added.

He later requested President Suluhu to change the names of those schools to be named after the battles such as that of Lukaaya.

WHY HE BUILT A SCHOOL IN CHATO

Explaining why he build a school in Nyabirezi, Museveni said he was never begged, ordered, or requested by anyone to build a school.

“President Magufuli didn’t beg me; he didn’t order me, he didn’t request but akangambira (he suggested or told me),” Museveni said leaving his audience a little confused.

He said there is no word except “akangambira, which can best represent Magufuli’s idea. When he asked how “akangambira would be translated in Kiswahili , the audience replied: “aliniambia (he told me), to which he also said, it would not properly represent what Magufuli meant.

Later, Museveni said he suspects that Mugufuli mooted the idea of a school after seeing that Museveni had already built two schools in the neighboring region of Kagera.

“I think it is because of that that he asked me. It does not mean that Tanzania does not have money, not at all. It is brotherhood and friendship (udugu na Urafiki).

OPPOSED TO BEING NAMED AFTER ANYTHING

Museveni said this is the first time that a school or a public institution is named after him.

“This is the first time in the whole world that a public institution or school is named after me. Back home in Uganda I opposed being named after people’s things, I don’t want it. I have my cows and children. It is only my wife and children who are called Museveni and some of them are opposed to it, they don’t want my name,” he said to the tumultuous audience.

“But since my brothers in Tanzania have decided to name this school after me, then I cannot oppose it,” he said.

The school sits on 11.4 acres of land. It has an administration block, sixteen classrooms, two staff rooms, a resource center, a dining hall, a kitchen, and two kindergarten classrooms. It will be the first public primary school in Tanzania to conduct its lessons in English instead of Kiswahili.

Tanzanian president, Samia Suluhu Hassan likened Museveni’s gesture to the biblical legend where Jesus preferred to teach his disciples to fish other than give them fish.

“I am told the cost is $1.673 million, Chato loves you so much. What you have done to the people of Chato can only be likened to the saying: ‘Give a fish to someone and they will be healed of hunger for the night but teach them how to fish and they will forever be healed for their lives,’” she said

In July 2019, Museveni flew from Angola where he was attending mediation talks with President Paul Kagame to Chato at the invitation of the late Magufuli. While addressing a rally at Chato, Mugufuli announced that Museveni had a surprise gift for them. He was quoted by the press as saying:

“My people, I want you to show gratitude to our brother and friend (Museveni), who has come from Angola, passed every country on the way, and come specifically to see us. Now he has told me he wants to contribute to our education here by building classes for our children. Listen to him from his mouth,” Magufuli said. Museveni had gone to Chato to visit the ailing Magufuli’s mother.

“Now you see, Mzee Museveni will give us seven classroom blocks, which means that if a child starts school, they can study from one block in primary one and keep moving blocks until primary seven; give him thunderous applause,” the press quotes Magufuli.

In 2015, Museveni contributed Shs 700 million to the construction of a school in Rwanda.