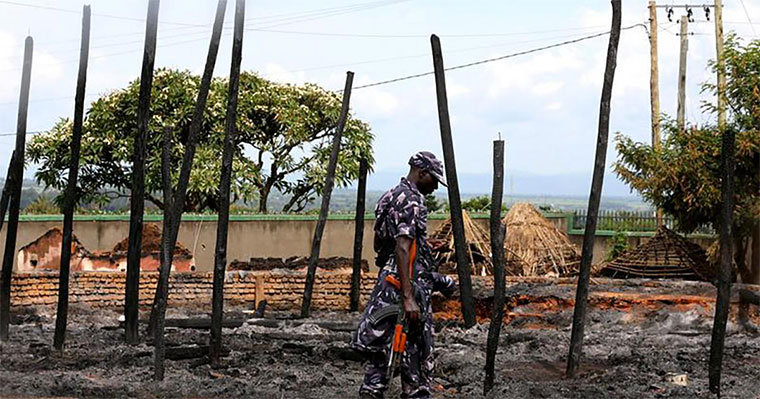 Five years ago on November 27, 2016, units of AK47-totting policemen and soldiers commandered by Lt Gen Peter Elwelu raided the palace of the Rwenzururu King Charles Wesley Mumbere on Kibanzanga road in Kasese town.

The raid killed more than 100 people, mostly Rwenzururu Kingdom loyalists. About 200 others were arrested including the King. It was one of the worst shootings in modern Ugandan history — and for those who survived or lost loved ones, the last five years have been about finding a new normal.

Kyoya was a primary seven finalist while Biira was a primary four dropout. Biira had gotten the love of her life, and in 1993, she adopted the name Geneva Kyoya after getting married. The two lived together and sired nine children until their union was cut short by the November 27, 2016 Rwenzururu Kingdom palace raid.

Kyoya was one of the more than 100 royal guards killed during the raid commanded by Lt Gen Peter Elwelu, who has since been appointed as Deputy Chief of Defence Forces. In an exclusive interview, a sad Geneva Kyoya narrates her five-year ordeal of raising nine of her own orphaned children and six of her husband without the family’s breadwinner.

“I wish the day [November 27 2016] never happened. For me to solely take charge of the family, everything has been horrible. It has been a tug of war to even get the basics of life,” she said.

The 46-year-old said it’s difficult to get used to widowhood because each passing day brings a measure of grief. She said failure to provide a pair of sandals, beddings, and school fees for the children weighs down her heart.

In the living room of their four-roomed semi-furnished house are sacks stashed with leaves used as beds for her children. She also said that two of her children have since dropped out of school for lack of fees, and married. None of her children has more than two pairs of clothes.

“But what can I do for my children? This is all I can afford because I can’t get money to purchase mattresses for all these children yet I am also struggling,” she said.

The financial pressure keeps piling. She runs away from her home sometimes to escape arrest for defaulting on loan repayment. In 2019, she picked a loan to roof her house.

“My husband was constructing this house before he died. However, after his death, I was afraid it was going to collapse... I decided to procure a loan from a Sacco to roof it and we move in since we were staying in a dilapidated structure. Unfortunately, I have failed to repay the loan. I wish I could get volunteers to support me on this,” she said.

Kyoya said she wouldn’t be so impoverished if her husband were alive. Apart from being a voluntary royal guard, her late husband was a carpenter whose workmanship was the major source of income for the family in Kaghando village of Bwesumbu parish, Bwesumbu subcounty.

In the neighboring village of Mulindi, lies a ramshackle home for Yudesi Soba, whose husband was also killed in the palace.

Soba’s husband, Nelson Soba, was a Rwenzururu Kingdom royal guard and a tailor. He also owned a local cassava milling machine at Kamwani trading centre. The milling machine has since broken down and the tailoring machine was never recovered from the palace after the raid.

The 39-year-old widow is now digging fields for a living to supplement her subsistence farming on a small piece of land left by her husband. But she was forced to abandon hard work after she accidentally cut her right-hand last year with a panga.

Two fingers were subsequently locked and she is grappling with trigger fingers; unable to bend them. This has exacerbated an already bad situation for her family of eight.

Another widow, Jemima Muhindo, a resident of Kinyateke village in Rwebihungu parish of Kahokya subcounty, has no place to call home.

After the husband Bakalhayi Baluku died in the palace raid, her brother-in-law tried to inherit her. When she refused, the husband’s family demolished her house to coerce her into giving in to their demands.

“My husband used to have some disagreements with his family. When he died, one of my brothers-in-law wanted to inherit me but I refused. This must be the reason they demolished the house built on the land I bought myself so that I am forced to stay on the ancestral land in the mountains,” she said.

Muhindo and six of her nine children are housed at her brother’s home at Kinyateke trading centre. Muhindo and her brother, and all their children, squeeze into the two-roomed house that the two families now call home.

The 43-year-old widow said there are days when her children, including the five-year-old who was born just a day after the burial of her father, have to eat one meal a day.

“When it is possible, we do have porridge for breakfast, katogo for lunch, and cassava bread for supper, but there are days when we make do with lunch only,” she said.

Muhindo’s one-meal-a-day ordeal is synonymous with most of the widows who stay in the urban areas. Peace Kabugho, the chairperson of Kasese Municipality Royal Guards’ Widows Association, said the widows not only have to put up with a single meal but are also often evicted from their houses for failure to pay rent.

Kabugho was lucky to procure a small piece of land in Kanyangeya cell, Kanyangeya ward in Kasese municipality. However, when floods battered Kasese town last year, her wattle house was flooded out. After temporarily relocating to Muhokya Internally Displaced Persons Camp, Kabugho decided to return to her land in Kanyangeya to take care of her six children.

“In the camp, I had a small structure and it was a bit difficult for me to stay there with all my six children. In the end, we have to find a way to survive because there was no free food in the camp,” she said.

HOW BIG IS THE PROBLEM?

Most widows are going through hell on earth. In Bwesumbu subcounty, for example, there are 39 widows. More than 100 royal guards died during the 2016 raid on the Buhikira Royal Palace.

Recent research conducted by Creations Forum Afrika-CAF (a human rights non-governmental organization operating in the Rwenzori sub-region), found that on average every male royal guard had two wives; meaning there are more than 200 widows spread across Kasese, Bunyangabu, Ntoroko and Bundibugyo.

CAF’s research also found that 80 percent of the orphans don’t have two pairs of clothes, beddings, or shoes. Their situation is, however, not any different from the situation of the wives of the jailed royal guards. While 132 kingdom loyalists were released in December 2020 in the run-up to the 2021 general elections, 79 others remain in prison.

Wives of those who were arrested also shoulder the burden of providing for their families. The Bakonzo community is largely a patriarchal society where men are not only the sole breadwinners in a family but are also the key decision- makers within a homestead.

Now, these widows are appealing to government and humanitarian agencies to support their families. Kyoya wants about Shs 3 million to clear the loan she procured to put a roof on her house.

“My husband’s family couldn’t help me clear this loan. Even some of the equipment he [deceased] used in the carpen- try workshop was taken away from me. How I wish I could clear this loan so that I get some sleep,” Kyoya said.

Yudesi Soba needs about Shs 500,000 to repair her milling machine.

“With a disabled hand now, what can I do?” she asked. “My family would be earning from the milling machine if it were functional. For now, it is by the effort of my children and God’s grace that we’re in a position to get something to eat,” she said.

According to Soba, her eldest child, 20-year-old Alvin Kiiza, is now the bread- winner of the family. Kiiza is a casual laborer.

But Kabugho, who lives in a wattle house that could be swept away anytime by floods should River Nyamwamba burst its banks again, prays she could get land to relocate her family from the flood-prone Kanyangeya area.

Similarly, Muhindo prays she gets her house reconstructed and she relocates her family there.

“I am an old woman with many children taking refuge in my brother’s house. My most pressing need is a house so that my children and I can settle at our own home.” Muhindo said.

Samson Bagenda, a resident of Kaghando village in Bwesumbu, believes the affected families need help. According to Bagenda, as a result of the challenges these families are facing, there has been a breakdown in responsible parenthood. He said some children have dropped out of school not only for lack of school fees but also due to lack of a father figure in a family.

But Johncation Muhindo, the executive director at Creations Forum Afrika, said government and other development partners need to help the entire community.

“Just imagine a community where you still find children sleeping on dry banana leaves or biveeras stashed with leaves for beds! This is an indictment on the government, development partners, and all of us. How can this be happening on our watch?” he said.

Muhindo warned that without deliberate efforts to improve household incomes, educate the young ones and serve justice to the victims of the various conflicts in the Rwenzori, the community will not heal and subsequently there will always be cycles of violence in every generation.

By the mere fact that nobody said a words about this article/the Kasese debacle, it means the massacre and the continuous absence of implementation Justice to the victims of injustice has become TO WHOM IT MAY CONCERN.

In other words, the Kasese people and victims of state terror are on their own. Otherwise, who in this country decides when and whether or not Justice should be seen to be done to especially victims of State Orchestrated and Sanctioned Violent Crime?
Report to administrator