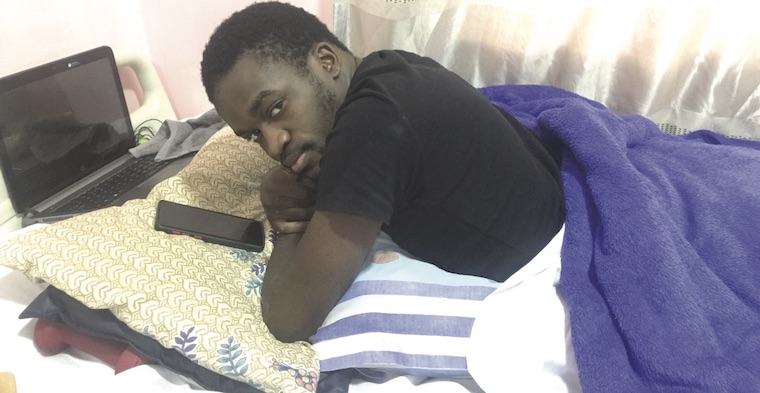 Hussein Abubakar Mukakala, 20, has been bedridden for one and a half years. When his car tyre burst, he lost control, veered off the road, and hit an electric pole.

Mukakala is one of 50 million people globally who get injured or crippled in road crashes that could be avoided. Mukakala, who graduated in 2019 with a diploma in Motor Vehicle Engineering from Nakawa Vocational Institute, has been bedridden since he got the accident in Lusaka, Zambia in 2020. His spinal cord is damaged and his legs broken.

“My father had sent me to Zambia to set up another motor vehicle workshop there since we had succeeded in setting up our Land-Rover Ssesanga Motor Service workshop here at Nsambya, Makindye division,” he said in an interview.

“In May 2020, as I was driving on Makeni road, in Lusaka, Zambia, my vehicle tyre burst, and the vehicle lost control. It rolled, veered off the road, and fell in the valley. I hit an electric pole,” Mukakala said.

He said two of his relatives in the car hit their heads on the dashboard and lost consciousness.

“However, I managed to shout and people came to our rescue. Zambian accident responders are no different from Ugandans. Before they rescued us, they stole everything we had including money equivalent to Uganda Shs 1.5m, phones, watches, shoes and almost took off our clothes,” he said.

“They later broke the vehicle glasses and pulled us from the wreckage. They took us to University Teaching Hospital (UTH) for treatment. This is where, I realized that I had sustained multiple injuries on my back, spinal cord and also broke my legs,” Mukakala said.

UTH, formerly Lusaka hospital, is the biggest public university hospital in Zambia with 1,655 beds. Mukakala said his relatives were discharged in a few days but he was retained since he broke his legs and had a damaged spinal cord. He needed surgery.

“I spent over a month in this hospital, in pain and grief but the doctors were not considering me for a quick operation since I was a foreigner. They give priority care to their nationals. We also delayed, since we had to get a police report before treatment, which wasn’t easy to get,” he said.

“They hung my legs and ordered me to sleep on my back as I waited for the operation. I got deep sores on my back, damaged my nerves and my lower body got paralyzed,” he said.

He said doctors in Zambia ordered three of his relatives to donate blood before the operation. They claimed it is government policy to avoid blood shortage in hospitals. Natalie Mashikolo, the spokesperson for UTH, didn’t respond to our email and WhatsApp inquiries.

Interviewed for this story, Dr Cornelius Masambu, a specialist at the department of Plastic and Reconstructive Surgery, at CoRSU hospital, Kisubi, said, “a spinal cord injury requires definitive surgery done in less than six hours from the time of the accident for quick recovery. However, many people miss it in six hours, even in developed countries.”

He said the lack of surgery in less than six hours affected Mukakala’s spinal cord.

“Medically, Mukakala is a paraplegic. This means he had a spinal cord injury, which left him paralyzed from the waist to the lower body including legs. He will take long to walk again,” Masambu said.

Masambu also said Mukakala has recurrent pressure sores, chronic pain, and bladder and stool incontinence, muscle and bone loss. He can’t bathe or dress up himself.

“He has been sleeping on his stomach since he was re-admitted and uses a catheter to urinate since his lower body part lost senses. His attendants change his pamper every after two hours,” he said.

He said Mukakala is being treated for joint stiffness and bedsores since he has been bedridden for a long time.

“We want him to go through counseling and psychotherapy to prepare him for life out of the hospital when discharged. This will also help him to psychologically address his fears and unrealistic expectations in society,” he said, adding that the moment his wounds heal, he will be able to sit again,” Masambu said.

He advised road crash victims to avoid loneliness and join support groups that share similar information. “This prepares them to fight the problem of post- traumatic stress disorder.”

Mukakala’s father, Hajji Abdulkareem Ssesanga said his son’s first surgery was done a month after the accident in Zambia. They put metal orthopedic implants to fix his legs, he said.

“I decided to return him to Uganda in December 2020, since it was too expensive to treat him in Zambia. I took him to CoRSU Rehabilitation Hospital, Kisubi, to get a specialist in plastic and reconstructive surgery...” he said.

Ssesanga said his son was delayed in Zambia after the crash due to the Covid-19 travel restrictions.

“It was too expensive to book flights during the Covid-19 lockdown. Most flights I tried to book cost about US$ 15,000 (Shs 54m) since I had to use three seats in the plane for Hussein to lie down while traveling. I also had to pay additional costs for nurses accompanying Hussein, insurance, and emergency medicines,” he said.

“Since the plane was expensive, I hired a car from Uganda to Zambia, a driver, a nurse to accompany the patient, accommodation, air-pressure mattresses for Hussein to sleep on while traveling, and others. It took us six days from Zambia to Uganda; I spent about $13,000 (about Shs 40m).”

He said after starting treatment at CoRSU in January 2021, the hospital released all patients ahead of the presidential election. The doctors advised that Mukakala could continue with homecare nursing until after the elections.

“However, homecare nurses failed to treat the wounds, and immediately after elections, Mukakala was readmitted at CoRSU hospital for skin grafting to heal wounds. At the moment, he can’t sit nor walk since his wounds have not yet healed and his spinal cord is still paining,” Ssesanga said.

He said doctors are waiting for sores to heal to operate on him again and improve his chances of sitting and walking again.

“I am requesting all orthopedic specialists, therapists, nurses, and the general public, to exchange ideas with me. I want to find ways of improving my son’s condition so that he can sit and walk again,” Ssesanga said.

He said he spent about Shs 60m on Mukakala’s treatment in Zambia and so far about Shs 30m at CoRSU. According to Zambia’s 2020 police traffic road safety report, about 28,484 road traffic crashes were recorded, of which 1,404 were fatal. About 4,427 persons were seriously injured and 5,729 were slightly injured.

Uganda’s situation, however, is more worrying. In one year alone, about 3,663 people were killed in road crashes and 8,370 injured, according to the Police Annual Crime Report 2020.

A study done by Margaret Ndagire, Suzanne Kiwanuka, Nino Paichadze, and Olive Kobusingye from Makerere University School of Public Health found that more than three-quarters of road crashes affect males, mostly youth aged between (15 and 49 years) yet they are breadwinners for their families and are busiest on the road.

“Majority of the road crashes, between 70 to 90 percent, are due to human error, like speeding, drink-driving, non-use of helmets, overloading, poor visibility and lack of training to ride motorcycles,” the study found.

According to the Global Plan Action for Road Safety 2021-2030, road traffic crashes cause nearly 1.3 million preventable deaths and 50 million injuries annually, making it the leading killer of children and young people worldwide.

“They are set to cause a further estimated 13 million deaths and 500 million injuries during the next decade and hinder sustainable development, particularly in low and middle- income countries.”