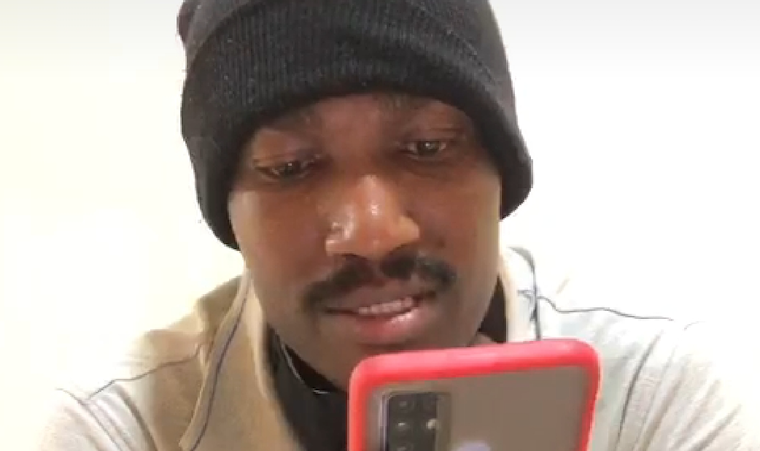 Paul Mubiru, a Kampala trader who sold grasshoppers (nsenene) aboard a Uganda Airlines flight on Friday has been arrested.

According to three passengers who traveled with Mubiru from Dubai aboard Uganda Airlines, he was arrested by immigration officers at the arrivals section at Entebbe airport. The aircraft landed Sunday at 11:49 am.

Mubiru was arrested after being swabbed at the airside by medical workers in the ongoing mandatory Covid-19 testing exercise for all incoming passengers. Mubiru was reportedly approached by two immigration officers after he removed his cap and shades.

"But I think they already knew him because even before he had removed his cap, the officers were looking at him curiously," the passenger said. 'They later moved out with him." said one of the witnesses.

Another passenger told our reporter that Mubiru was whisked away in a private vehicle that was parked at the apron, where planes park. The vehicle was parked close to the entrance of the arrivals section.

"Some passengers may not have noticed Mubiru being arrested because the whole episode lasted about three minutes," the third passenger said.

"He really embarrassed Ugandans abroad because every foreigner especially Kenyans made us a laughing stock," the passenger says.

Mubiru was detained at the Aviation police station in Entebbe, after being handled for a few hours in the security office of the airport. Mubiru's woes started after he was seen in a video selling grasshoppers as other passengers boarded the flight at Entebbe.

The incident, which has since gone viral on social media, happened before the airline's Airbus 330-800Neo departed for Dubai at Entebbe airport on Friday, November 26.

Mubiru, a purchasing agent for city traders, in videos circulating on social media, was seen selling grasshoppers for Shs 10,000 in a transparent polyethylene bag (kaveera). Mubiru has since apologized for his actions, saying he was hawking the grasshoppers for comical purposes.

Thaddeus Musoke, the chairperson of Kampala City Traders Association (KACITA) which Mubiru belongs to on Saturday vowed to punish him for his actions.

"How could a frequent traveler like him do such a thing? He cannot go unpunished because he even refused to listen to fellow traders and airline crew who told him not to sell nsenene," said Musoke.

He says that traders will decide Mubiru's fate during a meeting that will be held during this week.

There surely must be something in our law books that can be used to punish him. I also blame the cabin crew for not throwing him out of the plane.

People have been thrown out of air planes for dressing indescently. What this fool did was similar or worse.
Report to administrator
0 #12 Akao 2021-11-30 03:45
Quoting Lakwena:

But what crime did Mubiru commit?

In other words, without a writen a law and or Noticeboard, prohibiting vending Nsenene or Binyebwa on Board Uganda Airline, there is no crime.

Lakwena, I think it's written somewhere but obviously they cannot give a copy to every passanger.

That is the reason for security screening, and I am sure if a passanger ask for a written copy why outside food is not allowed in the plane, they should be able to get a copy.

I think the screeners, as well as the cabin crews should also be arrested, not only this man, as they allowed him to pass with nsenene and sell it in the plane
Report to administrator
+2 #13 Mubiru 2021-11-30 04:09
Museveni's complaints of laxity in the security forces was exposed by the nsenene seller.

Any person with half the brain knows that the issue is about security and incompetence of the airport and uganda air line staff who were handpicked because of tribalism and nepotism.

The nsenene man u berate simply exposed their ineptitude and stupidity and all of them should be sacked for the safety of travellers.

On effecient reputable airliners passengers are received at the entrance and directed to their seats and hand luggages are put in lockers above their seats.

Passengers are then seated ready to fasten their belts when the plane takes off. Its the waiter/waitress who move about to ensure that passengers are well seated etc.

In addition to staff in uniform there are security personnel your kanyama looking like passengers but ready to arrest anyone inconveniencing passengers like nsenene man. Many.competent and suitable Ugandans are jobless due to tribalism. Wake up Ugandans
Report to administrator
-1 #14 The Ugandan... 2021-11-30 13:38
Quoting Uhuru:

What an embarrassmen to Uganda airlines and Uganda as a whole. ......What this fool did was similar or worse.

Utter Bullshit!
This kind of attitude is holding Ugandans back.

A foreigner will come in, package these grasshoppers and make a fortune while Ugandans with this attitude remain in poverty.

Stop taking yourselves too seriously.

If he broke a law, then let justice run its course otherwise, leave the guy alone.

The fella put Uganda on the map.
The airline should be serving passengers this grasshopper delicacy as complimentary snack on the plane.
.
Report to administrator
12