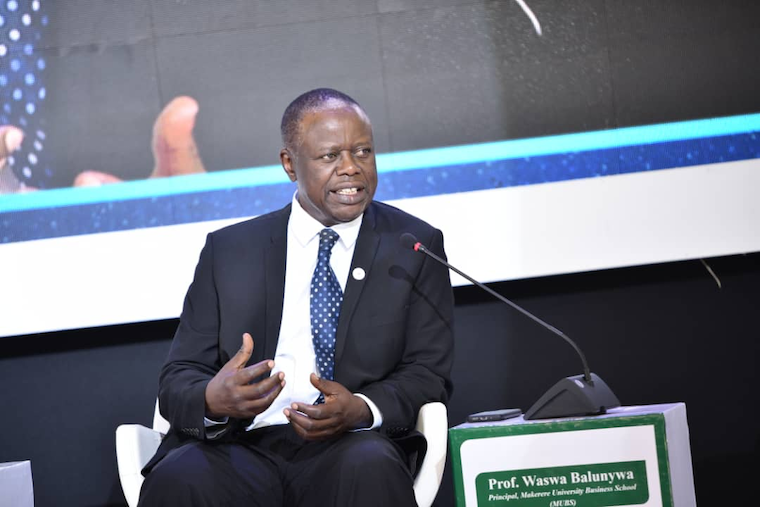 The principal Makerere University Business School (Mubs) Prof Juma Waswa Balunywa has stung his parent university, Makerere University for being slow, old-fashioned and thus failing to make any tangible impact in the community despite the enormous support and resources at hand.

Balunywa made the remarks on Thursday afternoon during a stakeholders mobilization event which is the first of the many other activities lined up in commemoration of Makerere’s centennial milestone as a beacon of higher education in the region.

According to Balunywa, if there was any other university in Uganda with resources that are available to Makerere, communities would be feeling the impact of their research-driven innovations, inventions, and interventions.

"They are used to old methods, Makerere. Makerere is very bureaucratic, it is very slow at decision making. If there was somebody who was faster at decision making, who sees opportunities, like now if there is somebody who came up who had similar stuff and came up with e-learning programs they would go beyond Makerere very quickly. It has the staff, it has the structure, it has the government support but they don't use them enough. Makerere would be much bigger," said Balunywa.

Balunywa who was discussing a theme; 'leveraging 100 years of excellence in building a transformed society,’ was met with mixed reactions from participants and university management officials.

Dorothy Kisaka, Kampala Capital City Authority (KCCA) executive director who was one of the panelists at the event concurred with Balunywa, noting that after 100 years of existence, Makerere is still hinged on just outputting graduates for the job market instead of problem-solving research.

On the defensive, Yusuf Kiranda, university secretary noted that Makerere might have made several impactful works in several fields but most of these have remained unacknowledged due to bad press and misinformation.

With Balunywa's argument on ensuring that Makerere is felt in the communities, Lona Magara, the university council chairperson, says that the university management is aware of this challenge and has laid strategies to make this achievement.

Magara accepts that besides riding on the rich history of the institution, there are great prospects for Makerere and its shareholders to renew their commitment to making the university more impactful in the years to come so that members of different committees and our societies feel Makerere in their lives.

"Besides reviewing our history, the year-long celebrations present great prospects for Makerere and the stakeholders to renew their commitment to make the university more impactful in its activities in the years to come. Our communities and societies must experience Makerere in some tangible way," said Magara.

Makerere University vice chancellor Prof Barnabas Nawangwe too agreed that there is a need for Makerere to leverage the success it has achieved throughout the past 100 years to solve new social problems. Nawangwe however notes that all this needs to be properly planned.

"And what are we going to do to be a research-led university? We must modernize the research infrastructure, we must modernize laboratories, come up with a central laboratory because we don't need to build laboratories in every college now. We can have a central laboratory, research centres, teaching and research hospital, we need a teaching and research hospital very badly. A science and technology pub which will actually help the young people to incubate their ideas into businesses, begin companies and create jobs for this multitude of the youth coming out and of course further human resource development. What is our promise? Our promise is that we're set for the next century of service to humanity and what are we praying for? Our prayer to you all is we invite you to be our partner as we continue building for the future," said Nawangwe.

Government chief whip Thomas Tayebwa who represented the speaker of parliament Jacob Oulanya as chief guest commended Makerere for its contribution towards higher education over years. He, however, raised several issues noting that they need to be urgently addressed for the betterment of the institution as it looks forward to the next 100 years.

Tayebwa highlighted that although the government is pumping huge sums of money into the university, more so in human resources, there has been little or no value for money as many well-paid lectures end up moonlight and fail to give the institution enough attention thus poor outputs.

"Lecturers, despite paying them well, are still concerned about the issue of moonlighting. You don't give value and much attention to the university. We request you to look at that, we request you to ensure you have the maximum teaching load because we hear there are those who have half of the teaching load they are supposed to be having, and yet those people are saying we recruit part-time lecturers. It cant be," said Tayebwa.

Tayebwa further advised that with all the aspirations and after 100 years of experience and existence, it's high time that Makerere University thought of becoming a self-sustaining institution and stop begging for a handout from donors and the government.

The government chief whip, however, noted that there is a need for the government to amend the Universities and Other Tertiary Institutions Act and review policy on higher education in Uganda to enable institutions such as Makerere to tap into their potential.

Makerere University which is the oldest of its kind in the region, traces it beginning in 1922 when it was opened as a technical institution by the colonial government. According to the organizing committee, Makerere will have a yearlong celebration of their existence and excellence at the helm of higher education in the country and the region.

Has it done that in the last 100 years, looking at UG? The jury's very much out on this.
Report to administrator
0 #3 kabayekka 2021-11-29 15:03
This is one of the leading academic institutions not only in East Africa but the whole of Africa.

Politically and economically it has been infiltrated by the misery of African dictatorship now 60 years and still counting.

When Dr. Obote I, started suckling dictatorship(entebbe ewoma) 1966 to 1972, Makerere went with him.

During the Amin rule, Makerere harvested what it sowed. The next decades saw Makerere building up dodgy liberators(freedom fighters) of this country as best friends and as the next great breed of African leaders who had their hearts with the African continent.

Makerere now is with such leadership which have turned into the same past dictatorship now over 40 years and still counting.

Unfortunately the international academic communities cannot expect much any more from such an outcome from this old age academic camp! You make your bed and lay on it.
Report to administrator