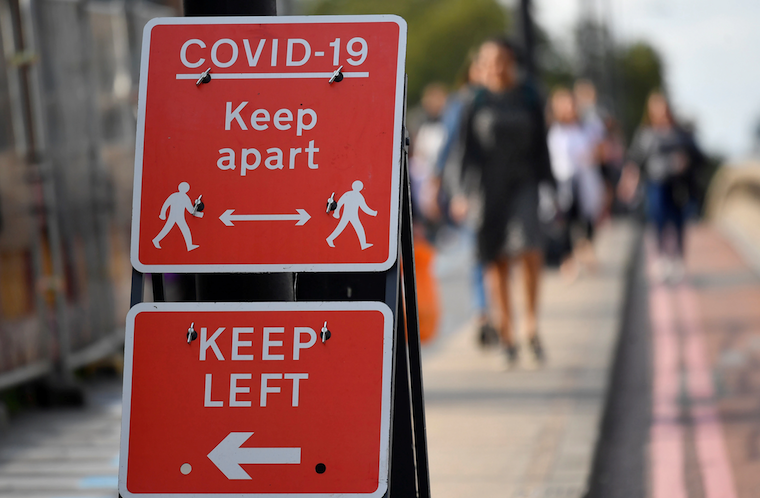 Omicron is the fifth WHO-designated variant of concern. It was first detected in recent weeks in South Africa, which has seen an exponential rise in COVID-19 cases.

There are about 30 mutations on the virus' spike protein, and scientists worry that some of them could make the virus easier to transmit. But scientists do not yet know whether omicron is in fact more transmissible or dangerous.

Worries about the new variant sent financial markets reeling Friday and pushed the price of oil down by $10 a barrel. The WHO said understanding the variant could take weeks and cautioned against travel restrictions. Its director of emergencies, Mike Ryan, urged "no knee-jerk responses."

Ryan's advice went unheeded as travel restrictions were immediately reinstated in places including Britain, the European Union, Canada and the US Other countries, such as India, Japan, Israel, Turkey, Switzerland and the United Arab Emirates enacted some form of travel curbs, Reuters reported.

Some epidemiologists warned that they were likely too late. Omicron has already been found in Belgium, Botswana, Israel and Hong Kong. Dozens of passengers disembarking in the Netherlands from flights from South Africa initially tested positive for the coronavirus.

"Travelers with a positive test result will be placed in isolation at a hotel at or near Schiphol," Dutch health authorities said in a statement. "Of the positive test results, we are researching as quickly as possible whether they are the new variant of concern."

Travel restrictions and quarantine requirements in Switzerland in reaction to omicron have caused the World Trade Organization to postpone its biennial meeting, originally set to begin Tuesday. One of the main agenda items for the gathering was improving the availability of COVID-19 vaccines.

Several of the ministers and delegates would not be able to attend the meeting because of the restrictions, Director-General Ngozi Okonjo-Iweala said.

“This has not been an easy recommendation to make, she said. “But as Director-General, my priority is the health and safety of all MC12 participants – ministers, delegates and civil society.”

But some authorities have held out hope that early detection of the new variant, coupled with the new restrictions, could have a bigger impact than the initial response to delta variant, Jeffrey Barrett, director of COVID-19 Genetics at the Wellcome Sanger Institute in Hinxton, England, told The Associated Press.

"With delta, it took many, many weeks into India's terrible wave before it became clear what was going on and delta had already seeded itself in many places in the world and it was too late to do anything about it," he said. "We may be at an earlier point with this new variant, so there may still be time to do something about it."

The South African government has called the travel restrictions "rushed" and raised concerns about the impact on business.

The CEO of South Africa's inbound tourism association, David Frost, says the effects will be devastating on the sector.

"We got off the red list in October, and it was sorely needed. We've been shut down for over 18 months," Frost said. "You know, the industry really is on its knees. The impact of this is absolutely dire to livelihoods, to families."

South African Tourism minister Lindiwe Sisulu told The New York Times that her country is feeling “punished” for the omicron research its scientists have done.

Dr Michelle Groome, head of the Division of Public Health Surveillance and Response at South Africa's National Institute for Communicable Diseases, said social distancing and mask use could help combat the virus, but she questioned the efficacy of travel bans.

"We haven't been able to contain the spread initially of the original virus, and all subsequent variants have spread globally, you know," Groome said. "I think there's limited value in terms of these restrictions."

Instead, she said, vaccinating more of the population would help prevent the most severe cases and deaths.

Roughly 35 per cent of the South Africa's adult population is vaccinated, a figure far below targets of 70 per cent.

Figures are even lower across much of the African continent. Experts have warned vaccine inequality would create a breeding ground for virus mutations. Astrid Haas is an independent urban economist in Kampala, Uganda.

"In Europe now and in North America, in particular, they're talking about booster shots and third vaccines, whereas we know now from the WHO that less than 10 per cent of African countries are going to even meet their vaccine target for this year. … Just a very sad manifestation of the global vaccine inequity," she said.

In the absence of vaccinations, lockdowns may be on the horizon.

Indeed no country wants to get the financial aggravation that has been going on for over 2 years now. African countries have no excuse to cry foul over vaccine inequity!

They need to remove all the unnecessary restrictions at once. Putting them into new lockdowns and stopping anything working in the African countries for months, is going to make the medical situations in these countries even worse than what they are now.
Report to administrator
0 #2 Akot 2021-11-28 17:54
{World reacts to new omicron COVID-19 variant}

How can this be seriouse, when the world never reacted COLLECTIVELY to find out how Covid-19 came to be, right from China?

Covid-19 knows it's FREE so began to change as it wishes, plays with vaccins, contures them!

I am sure if Covid-19 was born in Africa/USA/Europe, the world would have been working COLLECTIVELY & UNCONTITIONALLY right in place of the brith of the lethal virus, to find out how it came to exist, thus be in position to handly it with open eyes!

As it is, the world should not be surprised with more & more variants dropping by!