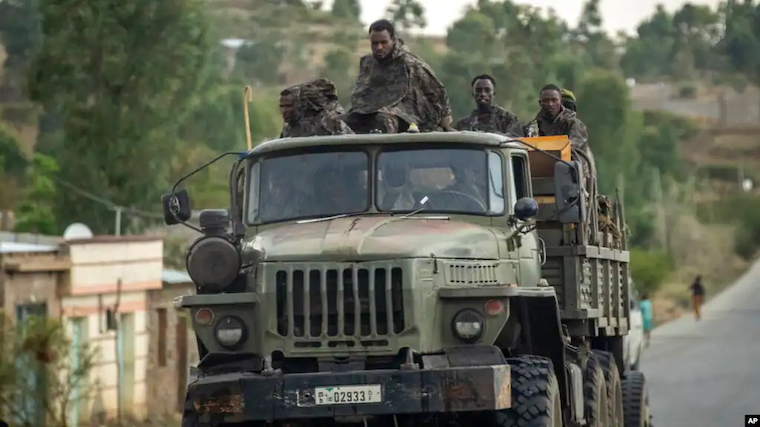 FILE - Ethiopian government soldiers ride in the back of a truck on a road near Agula, north of Mekele, in the Tigray region of northern Ethiopia

The US, France and Germany have joined other countries in urging their citizens to leave Ethiopia as fighting between federal forces and rebel groups moves closer to the capital, Addis Ababa.

The UN has also announced evacuation flights for family members of its staff in the country. The presidents of neighbouring Kenya and South Africa have joined calls for an urgent cease-fire. As the security situation worsens in Ethiopia, there are increasing concerns about what happens next.

CNN reports the US military has prepared special forces to assist its embassy workers and citizens if the security situation deteriorates in the Horn of Africa nation.

Briefing reporters in Washington Tuesday, US Special Envoy for the Horn of Africa Jeffrey Feltman said there was progress in getting all parties to agree to a cease-fire.

In November of last year, armed conflict broke out in the Tigray region between Ethiopian government forces and the Tigray People’s Liberation Front. Since then, the conflict has spread to other parts of the country. Tigray forces and the Oromo Liberation Army threaten to drive Ethiopia’s Prime Minister Abiy Ahmed out of power by storming Addis Ababa.

On Tuesday, Abiy said he would be at the front line to guide troops against the advancing rebel groups. Tobias Wellner is a sub-Saharan Africa senior intelligence analyst with Dragonfly Intelligence, a group that works on global security and political risks. He said Abiy’s plan to lead the military on the battlefront is to keep the troops' morale high.

“It’s really to rally support as the government is struggling to defend against the advancing rebel forces. I personally think it's very unlikely that Abiy is actually going to fight himself; it's more of a propaganda act and it also means it’s a sign that Abiy will fight rather than step down from his position,” said Wellner.

On Wednesday, Ethiopia government spokesman Legesse Tulu said the prime minister had arrived at the battlefront without giving details. Tulu also said Abiy’s deputy, Demeke Mekonnen Hassen, is handling government activities while he is away.
Wellner said a victory for either the rebel groups or the government will create more rebellion in the country.

He said there will be no winner in this war.

“The connections between the TDF and OLA and other rebel groups that have joined the fray, it’s a very cautious and not so strong alliance. Right now they are under the umbrella of opposing Abiy Ahmed but if they need to rule Ethiopia is a whole ‘nother question, then the Ethno-politics will come out and make that alliance very shaky. Last scenario stalemate there is going to be some sort of cease-fire that will often be broken,” said Wellner.

The Tigray leadership is calling on lifting the humanitarian blockade so that more than 400,000 people can receive much-needed humanitarian assistance. The government wants Tigray forces and other rebel groups to leave areas of the country they have captured.

Most probably these foreigners are the ones in a better position to tell but they are now leaving the horrible African country at a very fast rate.

Even the UN with that international obligation to stop global military conflicts is on its way to its comforts in New York!

The United Nation should be disbanded especially when it failed to stop the brutal and miserable conflicts in the Middle East, Europe, Latin America and Asia.

Even the UN with that international obligation to stop global military conflicts is on its way to its comforts in New York!

The United Nation should be disbanded especially when it failed to stop the brutal and miserable conflicts in the Middle East, Europe, Latin America and Asia.

It never helped to stop any single one of it at all at a very high cost in terms of money and lost human lives.

It's heartbreaking, developed world are still members financing UN that is of no use today, except ensure shitholes rulers are at peace as UN ensures their oppressed/starved/sick/abused... population migrate to developed world!...
Report to administrator
+1 #3 Henry Baisi 2021-11-25 15:53
Abiy Ahmed is not just facing a tribal militia. He is naïve in thinking he can defeat the TPLF.

The TPLF was the backbone of the Ethiopian Army for until last year when it withdrew from the Army and Government. What remained of the Ethiopian army after the withdraw of TPLF does not constitute a formidable force capable of taking on the TPLF. In addition, there foreign countries, Egypt top of the list, with an interest in what is going on in Ethiopia. The TPLF would be naïve not to approach them for backing.
Report to administrator
+1 #4 Lysol 2021-11-25 20:47
Whenever you listen to Museveni's advice you will go to the dog. The Ethiopian PM will end up like one Gaddafi.
Report to administrator
0 #5 Henry Baisi 2021-11-25 21:33
It is in the interest of Egypt for the Ethiopian Government of Abiy Ahmed to fall and be replaced by a regime answerable to Cairo. I can see their hand in this.

That said, Abiy does not have a ground to stand on. Besides having an army that "will not die for him", he has been disowned by the Oromo - his tribe.

If he is so loved in UG, get him out Addis Ababa to Entebbe before Bole Airport is captured by the Tigray.
Report to administrator
0 #6 Byabasheija Cantigen 2021-11-27 11:37
Quoting kabayekka:

So now who are the good African terrorists in this local civil war, against the bad terrorist here on the African soil.

What you are calling ''foreigners'' are a very civilized people and far more powerful and therefore cannot afford to remain under the mercy of African leaders wielding power on the continent incompetently and then casting blame on the Western countries which have absolutely no place for such incompetence !!
Report to administrator