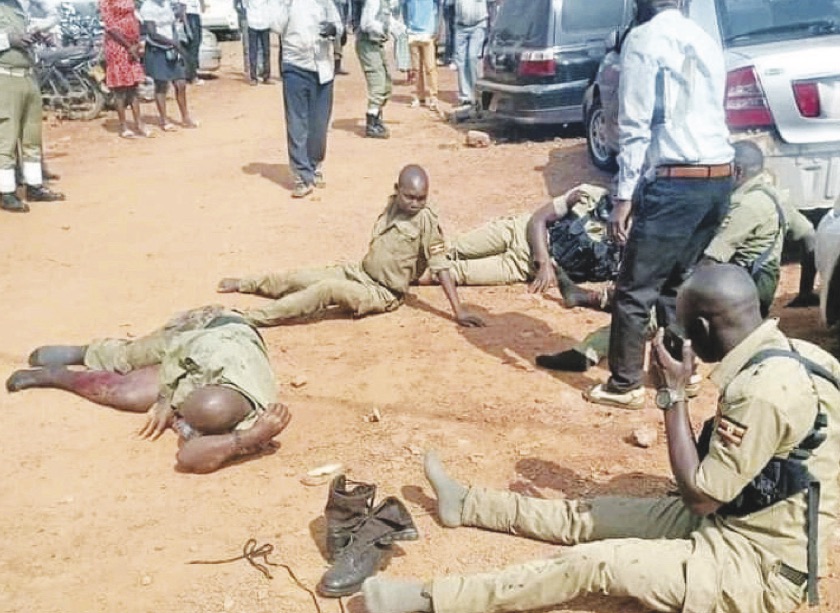 Victims and witnesses have recounted scenes of horror after bombs went off last Tuesday at the central police station in Kampala and Parliamentary Avenue, killing at least seven people and injuring 37 persons –including 27 police officers and 10 civilians.

The bomb blasts at CPS, Kampala, and at the Inspectorate of Government office on Parliamentary Avenue drew outrage across the country. Our investigation retraces the last steps of victims and witnesses and reveals how the blasts shook the country and devastated lives.

Police Constable (PC) Isaac Ekip, 29, was hit by bomb fragments in the face and legs. Interviewed about the incident at his house in Kasangati police barracks, Ekip said he was hit at the CPS quarter guard. Ekip has worked at CPS for four years now. He was transferred from Kasangati police station.

Ekip who walks with a limp has wounds all over his face and legs. As we settled for the interview about the incident, he said his ears were numbed by the blast. He said he couldn’t hear very well.

So, I had to sit very close to him and shout out my questions directly into his ears throughout the interview. On the fateful day, Tuesday, November 16, Ekip said, he woke up at his usual time; 5 am, put on his police uniform,
and boarded a car to get to his workstation, CPS.

He reached at 6 am, signed for his gun, and ate his breakfast. At around 8 am, Ekip and his other colleagues went to man their station at the police quarter guard on the Buganda road entrance.

“Just like any other day, we parked our police patrol at the quarter guard as we waited to respond to any emergency, which may require our attention around the city. I was seated at the quarter guard talking to other officers but I got tired and went to sit in the patrol car, which was smashed completely by the bomb. But it was too hot inside; so, I decided to sit outside near the pavement where other officers were,” Ekip said.

Thirty minutes before the bomb went off, Ekip said, he only saw ordinary people walk by going into the CPS build- ing. They were checked and directed where to go for assistance, he said.

When the bomb exploded, Ekip said, he first thought it was a car tyre burst but after seeing a cloud of smoke in the air, he realized it was something more serious.

“When I heard the explosion, I jumped down and that is when I realized that I was bleeding. I ran behind the CPS park yard where we park impounded cars and motorcycles but when I reached there, I realized that I didn’t have my gun; so, I rushed back to the scene to get it. And that is when I saw that my fellow officers had also been injured and officer Amos Kungu was already lying dead,” Ekip said.

The bomb fragments cut Ekip above the nose, neck, lips, and legs. After the explosion, Ekip said, they were taken inside the CPS premises, and disarmed. He said that is when he remembered to call his wife and tell her about the bomb before they were put onto police patrol cars and rushed to Mulago hospital.

He spent Tuesday night at Mulago hospital and was discharged the following day (Wednesday) at 3 pm after a head x-ray examination. There were no internal injuries or bomb fragments found inside the head, he said. About 10 bomb fragments were removed from his body at the hospital.

“After the treatment at Mulago, the doctors prescribed some medicine upon being discharged which I was told I had to buy for myself outside because it was not available at the hospital. Right now what is worrying me is the hearing problem, which I am taking medication for. The doctors told me if the dose gets finished without any improvement, I will require further treatment,” he said.

Police Constable Allan Ayebare, 36, is another survivor of last week’s bomb blast at CPS. He has been a police officer since 2015 but has been at CPS for about four years now.

He told The Observer that before the bomb went off on Tuesday morning, he was at the quarter guard with other police officers reading newspapers.

“I came with officer Amos Kungu [who died at the scene]. We had breakfast and then sat in the quarter guard but he [Kungu] remained outside because he was the one in charge of the entrance checkpoint that day. I grabbed a newspaper from Fred Katongole (patrol vehicle driver) who remained leaning outside the quarter guard and that is why he was badly injured,” Ayebare said.

Before the bomb blast, Ayebare said the suicide bomber had tried to enter the CPS building but was blocked by Kungu who was in charge of the checkpoint because he refused to have his bag checked.

“The man [suicide bomber] tried to get past the checkpoint and proceed into the CPS premises but was blocked by Kungu because he refused to have his bag checked. Kungu chased him away and he moved towards the ministry of Gender, Labour and Social Developement offices but made a U-turn and moved towards Buganda road pretending to be talking on the phone. When he reached where most police officers were, he exploded,” Ayebare said.

Ayebare said the bomber looked to be in his early thirties, slender, tall and dark-skinned carrying a backpack. When the explosion happened, Ayebare, who was inside the quarter guard with six other police officers, fell to the ground. When he tried to stand up a few minutes later, he realized he had been hit by bomb fragments and his left leg was burnt. He said his left ear was numb. He couldn’t hear anything. Another fragment had hit him around the left rib and pieces of human flesh were all over his uniform.

“Our deployment officer who had come out after the explosion ordered those who could walk to get inside the premises and sent other officers to lift those who had been badly injured. I was lifted by a CID woman who took me up near the Ministry of Gender offices where the patrol car found us and rushed us to Mulago hospital,” Ayebare said.

He said Kungu breathed his last as he held him in his hands. One of Kungu’s legs was smashed by the bomb and lay next to a woman who was taking food to a suspect inside the police cell at CPS. She was severely injured. Ayebare said he did not take long at Mulago hospital. His relatives transferred him to a private clinic immediately.

Though Ayebare can walk now, he still has bomb fragments in his left calf. He has been told by doctors that they won’t be removed because it would require cutting off the whole calf muscles. He said doctors are giving him medicine, which will mold the fragments into the body.

He also has a fragment lodged in his left upper rib, which will be removed after thorough medical cross-examination to ascertain that it doesn’t affect the ribcage. Prior to the incident, both Ekip and Ayebare said security at CPS had been beefed up since the Komamboga bomb blast.

According to police reports, the two bomb blasts at CPS and Parliamentary Avenue on Tuesday, November 16, injured 37 persons out of whom 27 were police officers and 10 civilians.

So far seven people have been confirmed dead including a police officer attached to CPS, Amos Kungu, who died on the spot. The three dead civilians were identified as Ismail Basibe (who died at CPS), Christopher Sande (who died on the spot at Parliamentary Avenue), and George Katana (who died from Mulago hospital where he had been rushed).

NOT BUSINESS AS USUAL

The bomb at CPS also shattered the opposite Kooki Tower, a commercial building with gadgets, clothes, footwear, and cosmetics shops and pharmacies.

Alex Kasozi, a boutique operator at the building, said he had just finished cleaning his shop on Tuesday morning when he had a loud explosion.

“At first I thought the building had collapsed because the whole building shook. I looked outside and saw everyone scattering in different directions, lots of smoke in the air and glass windows had been smashed. Moments later, police officers came around ordering us to close our shops and get out of the city,” Kasozi said.

The roads to Kooki Tower have been reopened now but Kasozi says business is still very slow. People are still scared of going near the building.

During our interview, a customer called. He wanted to buy a shirt but was afraid to pick it. Kasozi had to take it to him down at Mapeera house. Security at Kooki Tower has also been tightened. There are now three walk-through metal detectors at the main entrance.

Security guards are also doing body and luggage checks. On Parliamentary Avenue, Antonio, an eyewitness, said the suicide bombers on boda boda seemed disappointed that they couldn’t sneak into parliament. In a panic, he said, they detonated the bomb near the government offices.

“I was yet to take back shoes to my customer in his office at the IGG offices before the blast. Unfortunately, some of them were injured,” he added

“But I am lucky to have survived the incident because I was going to see other customers when I saw these young men on boda bodas stop and blow themselves. I collapsed and got back after some time,” he said.

A police officer at CPS, Kampala, who declined to be named, said they had been tipped off that insurgents planned to attack. He wondered why and how they were caught off guard by the suicide bombers.

“The suicide bombers and their collaborators capitalized on our reluctance and we are complimenting the military for safeguarding lives and property, but how the bombers beat our security checks to inflict the dishonorable act still beats our imagination,” the officer said.

Webz, do not forget we are under the leadership of Terror Organization called the NRA/M.

Museveni is a terrorists who is now calling for outside help, pretending his family business is in danger!

Time to ask who these the calls terrorist are?

Are they those disappointed with him or Kagame & want to take over Uganda?

Tribal leaders MUST BECOME HUMANS & STAND DOWN, to give chance to UNITY, before it's too too late, even for them & their children!

Why are Ugandans waiting for change from another band of terrorists?

Museveni's forces terrorise armless Ugandans, but they are now terrorised by aother band who want to replace them!

the Uganda Police was the first victims of the NRA terrorism.

haven't Ugandans wonder why Gen Tibuhaburwa resents and detests the police so much, so that he summarily treats them shabbily, neglects their welfare criminalizes and demonize them as PARASITES?...

Ugandans forgot Museveni reformed the then National Police, then formed his own, just like he formed his personal army!

But Ugandans MUST know they have the power, in UNITY, to end Museveni's hold on their country!

...for a long period, the NRA occupied all the policeStations, intimidating the police.

But since he could not disband the police, he decides to infiltrate it by appointing military Gen to superintend the UP... from the senior Minister to the Permanent Secretary, today the Ministry of Internal Affairs is a military Garrison, superintended over by Generals.

We have an accomplished criminal rumbling, raving and swearing murder of Ugandans.

Why will Ugandans go for next fake presidential & parliamentary elections, that will further legalise their own destruction by Museveni & in peace?

Ugandans, why is the tribalistic system that disempowers you, leaves you alone at the mercy of Museveni, while the outside world watches in silence, still standing?
Report to administrator
12