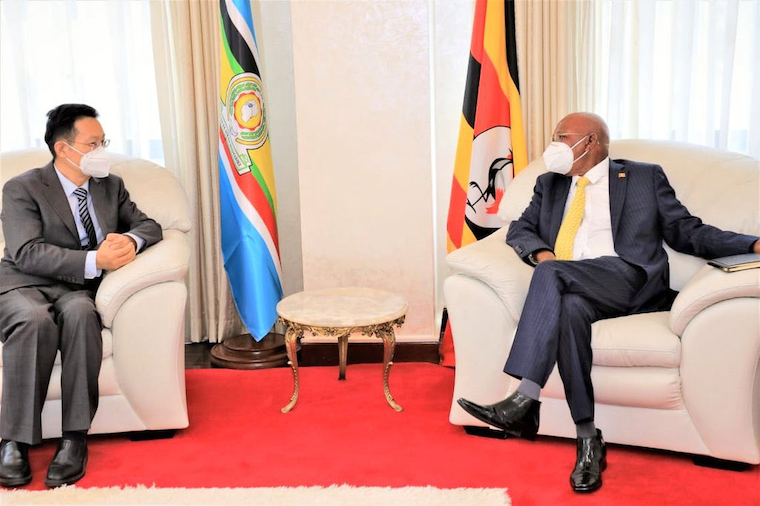 The Chinese ambassador to Uganda has pledged to mutually engage Uganda to address the prevailing security concerns in the region. Zhang Lizhong disclosed this during a hybrid media briefing of the forthcoming 8th Forum on China-Africa Cooperation ministerial conference of Africa to be held November 29-30, 2021 in Dakar, Senegal.

Zhong said for a country like Uganda that has guaranteed peace in the region, it would be very essential to also engage with them on completely mutual grounds to see how the region could be pacified.

“…security is a very important component of relationships between countries. We emphasize that it should be addressed in African ways that are in the fundamental interests of Africans…” Zhong said.

The upcoming conference in Dakar will focus on new developments, new imperatives, new opportunities and cooperation.

Zhang also announced that China would no longer commit any funds towards the exploration of coal around the world in respect to their commitment at the just ended COP26 climate conference in Glasgow. He noted that they would instead fund the development of new energies like increased investment in hydroelectric power generation and solar power generation.

However, he added that it was unrealistic for Africa to be forced to abandon their unexplored mineral resources like oil all in the name of protecting the environment. He added that Africa should be encouraged to phase down on the use of these traditional sources of energy in respect to environmental protection but it was unrealistic to tell developing countries rich in untapped mineral potential to abandon them yet these resources could change their fortunes.

Commenting on energy giant CNOOC’s final investment decision in the exploration of Uganda’s oil, Zhong advised them to use the latest clean energy techniques of utilizing traditional energy like oil by leveraging on technology means he said could also protect the environment, but at the same time reap from the utilization of oil which shall be a big boost to Uganda’s economic development.

Reiterating China’s commitment towards Uganda’s development, ambassador Zhong said the approximately 16-year relationship between the two countries has seen Chinese countries contribute towards local socio-economic transformation and development by undertaking major projects like the construction of the Karuma hydroelectric power plant and the expansion of the Entebbe international airport. These and more he, said have laid a foundation for Uganda’s future economic and social development.

In the fight against Covid-19, Zhong reiterated the country’s commitment towards the vaccination of their people through the donation of vaccines to the country.

"The Chinese government has donated 1 million doses of Sinovac vaccines and over 50,000 units of testing kits to Uganda and is working with Uganda on delivering the third batch of 600,000 doses…” he said.

The Chinese medical team stationed at China-Uganda Hospital is also making their contributions by sharing anti-pandemic experiences with colleagues in Uganda - a good form of knowledge transfer, he said.

Ah! China is main polluter of earth, isn't concerned about attending Climate Change Conferences, but will help demon migrant Museveni ensure Ugandans are slaves for good, while China will bring Chinese to take over businesses in shithole Uganda & make it their land!

Why have Ugandans abandoned themselves to be slaves of migrant Museveni, while China, UN, USA, EU filled their country with migrants/refugees?

Once the tribalistic system is down & Ugandans UNITE to show Museveni way out, they will be in position to say NO to all these inhumanity any demon can impose on them!

Ugandans MUST save themselves or are doomed for good as long as Museveni owns their land!
Report to administrator