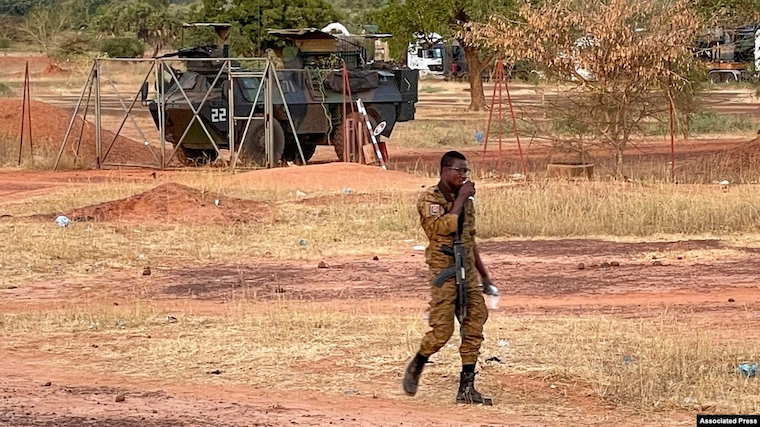 A Burkinabe soldier walks past a French Armoured Personnel Carrier part of a French military convoy heading to Niger, stopped by protesters in Kaya, Burkina Faso

OUAGADOUGOU, BURKINA FASO - The shutdown of internet access via mobile phone networks that began Saturday dragged on for a fourth day Tuesday. The government said in a statement the shutdown is in the interest of national defense and public security and will last until around 10 pm Tuesday.

VOA talked to some Burkinabes on the streets of Ouagadougou to ask how the shutdown was affecting them and what they thought of the government’s decision. Alexi Sawadogo, a physician, spoke outside a bank on one of the city’s busy boulevards. He said he was there to check his account balance as the shutdown meant he could no longer do so online.

“It disconnects us from our friends who are outside the country, with whom we communicate regularly,” he says.

He notes that he understands that it is because of the French convoy that was blockaded in the north, but says insecurity is not a valid reason and that the government needs to review its strategy.

The shutdown has come in the wake of protests in recent days that have blocked a French military supply convoy that is attempting to travel from the Ivory Coast to Niger. Protesters say they want an end to French military intervention in the regional war against Islamist militants.

There have also been protests against the government’s handling of security, after a terrorist group believed to be associated with al-Qaeda killed more than 50 military police in an assault on a base in northern Burkina Faso on November 14th.

Ali Dayorgo, a university student, said the shutdown has affected his ability to work and learn the latest news. He says he doesn’t understand why the shutdown is happening, but he hears the voice of the Burkinabe youth.

“I feel the anger of the youth,” he expressed, adding that even if he doesn’t join protests against insecurity, he supports them.

Drabo Mahamadou is the national executive secretary of the “Save Burkina Faso Movement,” one of the protest groups that is calling for President Roch Kabore to resign. He said they called on the population to attend Tuesday’s funeral and to attend a protest on Saturday.

He says, because the government is insensitive to pain, we are calling on the population to come out en masse on the 27th. We want [protesters] to prove that this government is not helping Burkina Faso. It is the government that is causing harm to the Burkinabé people.

A government spokesperson could not be reached for comment. Eloise Bertrand is a research fellow at the University of Portsmouth who focuses on Burkina Faso. She thinks the restrictions on the internet are unwise; pointing out that “this shutdown may well backfire against the government. We can see that civil society groups and stakeholders who were not really involved in protests against the French convoy are annoyed and angered by this internet shutdown.”

Reports suggest the French military convoy is now waiting in the town of Zinaire, about 30 kilometers north of the capital. Protests are also said to be taking place in the town.

With the demonstrations continuing, it remains to be seen if the government will lift the internet shutdown with further protests are scheduled for Saturday.

The French are indeed misguided concerning the efforts of the African people to try and solve their own African problems. Unfortunately for the leadership of Africa, such an international declaration seems to be misunderstood by them.

Insisting to let Africans solve their own problems does not mean that African leaders only should take the decisions.

It does not mean that the African leaders must start to have the right to throw their own people in prison, kill them, rule them as they want, and ban education and the internet and so on!
Quote | Report to administrator
0 #2 Walimese James 2021-11-24 11:26
Typical African stupidity!!

A black president of an African country closes the internet connectivity in his country, not aware that the global economy is connected by the Internet, and that the internet is here to stay as part of all business !!

And then the same African president appears in public events blaming the very countries that support their budgets and abusing those same countries!!!

Africa needs a political Renaissance ...the aging leaders in Africa are becoming senile and they are not ready on any single day to leave power when their terms are up constitutionally!!! Ha ha ha!!!
Quote | Report to administrator
0 #3 kabayekka 2021-11-25 03:28
Walimasw James you have a point indeed. That is why our grandparents got a name for people who all the time hold guns whether they are white or black against the heads of their fellow human beings.