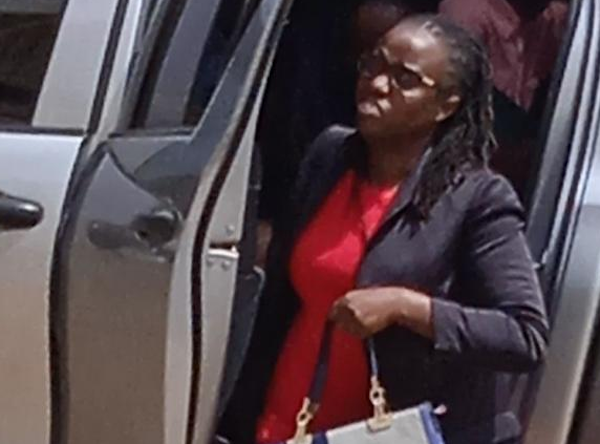 The two are accused of abuse of office, embezzling funds, and causing financial loss to the government. Luyimba was picked by a team of detectives from his current station in Butebo district while Tusiime was picked from Rubirizi district.

Luyimbazi who was CAO for Rubirizi district between 2019 and 2020 is accused of conniving with Tusiime who was in charge of salaries and pensions to defraud government of millions of shillings. Fredrick Okech, the Mbarara regional inspector says they received a complaint from a whistleblower who had retired from civil service and was waiting for his gratuity of Shs 28 million.

He says the whistleblower reported that Tusiime had asked him to 'cooperate' and allow her to deposit Shs 40 million on his account instead of his actual Shs 28 million and then withdraw the Shs 12 million excess and give it to her.

He says this sparked off an investigation into the Rubirizi district payroll where they discovered that 78 newly recruited primary school teachers had received money way above their salary scale.

"When we received the complaints, we quickly went to the district and started the process of investigations. Along the way, we noted that Ms. Doreen Tusiime used her office as the principal human resource officer in charge of the payroll took advantage of the newly recruited teachers. She would pay excess money to the accounts and later ask her to refund it to her in person," said Okech.

"Around Shs 73 million was refunded and given to her in cash. Coincidentally, these teachers did not have receipts or evidence of refund and the [former] CAO simply put a recovery code on the accounts and teachers painfully paid for monies that they actually never 'ate'. So around Shs 26 million was directly sent to Doreen's mobile money account which we could prove," Okech added.

Tusiime is also accused of fraudulently including her sister Mercy Mpiirwe on the government payroll as a secondary school teacher at St. Michael High School whereas not, and paying her Shs 15 million for one year which was well known to the accounting officer Luyimbazi.

Okech says Mpiirwe has also been arrested and these will appear in the Anti-Corruption court in Kampala to answer to charges of abuse of office, embezzling funds, and causing financial loss to the government.

According to the 2018 IGG’s report titled: Bi-annual Inspectorate Performance Report to parliament that was based on the complaints raised by citizens against district officials, Rubirizi was ranked the least corrupt district followed by Ntoroko while Kampala and Wakiso ranked the first.

Unless the international community especially the USA, EU and the UK helps Africa and sanctions such thieves( whether politicians or technocrats) TOGETHER with their children, Africa will remain such an eye-sore on the world scene!!!
Report to administrator
+1 #2 Walimese James 2021-11-24 11:16
There you are with the Ugandan thieves! We are totally sick of such thieves who hide behind corruption...!

Ugandans must know that for every night a family in Uganda goes without a meal, such thieves have stolen the money! And the country's CEO is out unbothered about those thieves!!!
Report to administrator