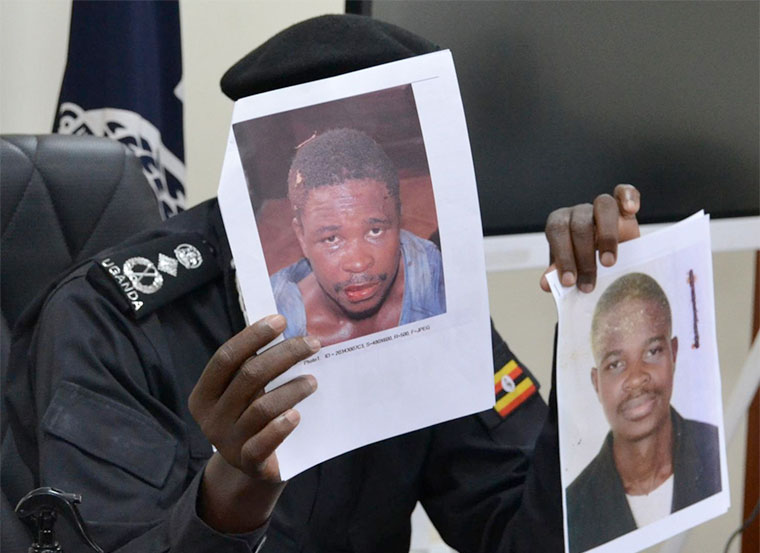 Ever since the attack on former Chief of Defence Forces (CDF) Gen Edward Katumba Wamala on June 1, the Chieftaincy of Military Intelligence (CMI), Crime Intelligence and Joint Anti-Terrorism Taskforce have arrested over 100 terror suspects with 12 of them shot dead during investigations.

The killing of terror suspects was reaffirmed by President Museveni in his Saturday evening address to the country in regards to the recent four bombs blasts that have left at least nine people dead and scores injured.

On October 23, a bomb went at a pork joint in Komamboga, Kawempe division leaving one female worker Emily Nyinaneza dead. Within two days, another bomb would go off inside a Swift Bus at Lungala in Mpigi, killing only the alleged suicide bomber Isaac Matovu out of the 52 passengers.

Last week on Tuesday, an alleged suicide bomber identified as Mansoor Uthman detonated a bomb in his backpack at the Kampala central police station (CPS), leaving two people dead and 22 others nursing wounds.

Three minutes later, another bomb exploded at the office of the Inspector General of Government (IGG) along Parliamentary Avenue killing one person on spot and another who died in hospital. Security identified the bomber as Abdullah Wanjusi while their accomplice whose mission was allegedly to bomb Bwaise in the evening was identified as Musa Mudasir was shot dead at about 10:30 am on the same day.

CMI under the command of Maj Gen Abel Kandiho, Crime Intelligence commanded by Brig Chris Damulira and JATT commanded by Brig D.B. Twesigomwe started by killing Hussein Lubwama alias Master in the wee hours of July 1. Maj Gen Paul Lokech who was later elevated to Lieutenant General upon his death was the overall commander of the team hunting for Gen Katumba attackers, said Master was killed while fighting forces.

“The task team tracked down and arrested Lubwama Hussein alias Kinene Christopher alias Master, a resident of Kabulengwa – Kyebando in Nansana Municipality; who was arrested along Nansana Nabweru road. The suspect who was the team leader and head of the domestic terror cell, put up very stiff resistance to the extent of grabbing a gun from an officer but was subdued by the task team. He later succumbed to the injuries,” Lokech said.

In the wee hours of July 2, military and police commandos killed three more ADF-linked terror suspects including Juma Said, Idris Sserwadda and Mustafa Kawawa alias Amin. The trio was shot dead while in handcuffs at Kanyogoga, according to witnesses our reporters spoke to.

On October 4, security then killed Hamidu Nsubuga at Kyebando claiming he was one of the ADF terror gangsters that wanted to blow up mourners at Lokech's burial in Pader.

On November 5, security again killed Adam Matovu in the wee hours in Naguru, an upscale Kampala suburb. Police spokesperson, Fred Enanga claimed Matovu was killed while escaping. But URN was informed by security sources that he was killed in handcuffs at around 2 am.

“The Joint Counter Terror task team found themselves in a volatile situation, after a terror suspect, jumped off a patrol vehicle and tried to escape. Unfortunately, the suspect succumbed to the bullet wounds at the scene around Naguru remand home. The suspect now deceased, has been identified as, Matovu Adam alias Manihajji aged 36, and resident of Ttula zone, Kawempe 1 ward, Kawempe Division," said Enanga.

Muhammad Kiryowa alias Moses Kiryowa was arrested and shot dead on Thursday after the two bombs explosions at CPS and IGG's office while Sheikh Muhammad Abbas Kirevu was shot dead a day after twin bombings.

"The Sheikh was arrested...He, however, attempted to escape while being escorted to the patrol car, which led to a shooting, killing him instantly,” said Enanga.

Even though URN had earlier learned about four other suspects who had been shot dead by security, security had not revealed their names until Museveni’s address. They include Atindiya Yasin, Musa Byaruhanga, Joshua Turikimanya and Joseph Bagonza.

Although human rights lawyers like Dr Livingstone Ssewanyana of Foundation for Human Rights Initiative, Najib Kasule from the Network of Public Interest Lawyers and Umar Nyanzi of Muslim Centre for Justice have termed the killing of the suspects as extra-judicial, Museveni warned that ADF remnants only have one option to surrender or be killed. Museveni warned that even if the suspects run to other countries, Uganda will pursue them from there.

Museveni urged Ugandans not to feel any sympathy for killed suspects, saying they were killed after being implicated by 'shocking' intel that will later be revealed to Ugandans during the trial of the other suspects.

Museveni said all the arrested and killed suspects have been a result of the built security infrastructure that resonate with his 12-point security plan unveiled on June 18, 2018.

Museveni unveiled the 12-point plan program following the murder of then Arua Municipality MP Ibrahim Abiriga. The plan included the installation of CCTV spy cameras, recruitment of LDUs, installation of tracking chips in cars and motorcycles, banning of hoods, digital number plates, electronic registration of all guns in the country.

So far more than 3,000 CCTV cameras have been installed in Kampala and some of the suspects were arrested or killed using footage captured by the cameras. More than 20,000 LDUs have been recruited across the country while over 57,000 guns have been electronically registered and fingerprinted save for military agencies.

+11 #1 Jama 2021-11-22 13:57
Killing a suspect is killing evidence and killing evidence means there is no reason for any judgment.
Quote | Report to administrator
+3 #2 sula 2021-11-22 16:21
'general' sabiti and his men raided Makerere University and wrecked havoc in the Institution, girls, guys including a disabled student were brutalised shamelessly. Later sabiti was transferred from police.

Sabitit & co should not think Uganda has forgotten them, they join the list of the Kandiho,kalekezi ,karangwa,etc who have committed atrocities against the people of Uganda. ONE DAY ! so Uganda is now a gamwe park ? where these guys shoot for pleasure
Quote | Report to administrator
0 #3 kasede 2021-11-22 16:38
Quoting Jama:

I agree. The "Ugandan Arabs" [patent pending], to me, seem to be specifically targeted, aren't they?
Quote | Report to administrator
+3 #4 WADADA rogers 2021-11-22 22:40
In 1986, a group of terrorists emerged from Luwero Triangle having killed and led to the killing of thousands of Uganda.

Nobody killed them even when they were confessed terrorists. Today, they are ruling Uganda and killing whoever they suspect is a terrorist, they dont give them an opportunity to defend themselves.

How do you kill suspects that you have already arrested and then claim they were planning to run away, why shoot to kill and then you go and announce how you have killed
Quote | Report to administrator
+1 #5 WADADA rogers 2021-11-22 22:42
This is your message Museveni and your gang of murderers in police and army Uniform. Matthew 26:52 says ... Whoever strikes and kills a man must surely be put to death. ... "If anyone is destined for captivity, into captivity he will go; if anyone is to die by the sword.......... In other words, whoever takes life by the sword even his own or that of his descendants will go the same way..
Quote | Report to administrator
0 #6 kasede 2021-11-23 00:19
Quoting sula:

'general' sabiti and his men raided Makerere University and wrecked havoc in the Institution, girls, guys including a disabled student were brutalised shamelessly. Later sabiti was transferred from police.

Sabitit & co should not think Uganda has forgotten them, they join the list of the Kandiho,kalekezi ,karangwa,etc who have committed atrocities against the people of Uganda. ONE DAY ! so Uganda is now a gamwe park ? where these guys shoot for pleasure

I agree BUT Thank Goodness, it is no longer a northern problem. I pray: May those who nursed the olive trees over the long period of its maturity NOW reap the harvest to the full. AMEN.
Quote | Report to administrator
+1 #7 Apollo 2021-11-23 11:11
In strategic terms, Afghanistan has taught us that it is not the best equipped, trained or intelligence gatherer that wins the war.

It is the one who out-survives and in the process bankrupts his enemy that overcomes. Gen. Museveni has been very vocal about his military prowess of late and clearly has plans to do what the Americans did 20 years ago and invade insurgents in another Country.

Sadly, no rational voice has stated what will inevitably be the consequences of this adventurism to this Country. He will long have expired and left us to grapple with his failed "cowboyism".
Quote | Report to administrator
0 #8 Lakwena 2021-11-24 08:05
Quoting WADADA rogers:

In 1986, a group of terrorists emerged from Luwero Triangle having killed and led to the killing of thousands of Uganda.

Nobody killed them even when they were confessed terrorists. Today, they are ruling Uganda and killing whoever they suspect is a terrorist, they dont give them an opportunity to defend themselves.

How do you kill suspects that you have already arrested and then claim they were planning to run away, why shoot to kill and then you go and announce how you have killed

Wadada, from the onset in 1981, when Bloody Tibuhaburwa launched his subversive activity; Obote (RIP) reminded Ugandans that Mr. M7 is "a killer". But nobody took him seriously.

1. Who did not hear Bloody Tibuhabrwa tell Ugandans that he is the "Author and Master of Violence"?

2. Who did not hear Bloody M7 tell Ugandans that he is Ssebalwanyi (the King of Bloodshed)?

3. Who did not hear Gen Tibuhaburwa tell off Ugandans that he has no friends?

After being dropped from Cabinet and broken hearted: before he passed on, some Ugandans wondered, how Hon Kategaya could languish in poverty and destitution, yet he was the childhood friend of Gen Tibuhaburwa!

But Tibuhaburwa lashed out at Ugandans saying: he has no friends.

4. On 26th Jan 2017, in public; who did not hear the King of bloodshed tell of Ugandans that he is not their servant or employee.
Quote | Report to administrator
0 #10 Lakwena 2021-11-24 08:36
In other words, like bewitched, many Ugandans still see nothing wrong with supporting a Monster, who have caused a lot of suffering to millions of Ugandans and the Great Lake Region.