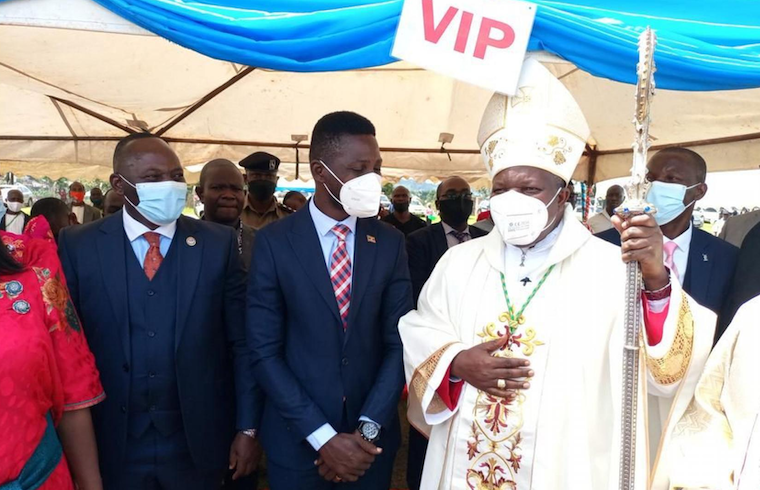 Kitovu Sports Arena in Masaka was a scene of running battles between police and supporters of National Unity Platform (NUP) who'd gathered to catch a glimpse of party president Robert Kyagulanyi Ssentamu.

Kyagulanyi and MPs from Masaka sub-region attended the celebrations on Sunday, in a mass celebrated by Bishop Severus Jjumba to mark 'Masaka Diocesan Day'.

The diocese was also paying special honour to former vice president Edward Kiwanuka Ssekandi for his unrelenting contributions to the church and service to the country, which according to Bishop Jjumba, is worth appreciating.

All was well until crowds of youth started forming at the main entrance and around the fence of the venue, prompting the police to disperse them with teargas and rubber bullets.

The church congregation was also not spared either as sounds of gunshots kept on interfering with the order of mass as it was being celebrated. Anti-riot police personnel led by an officer only identified as Okello, sealed off all roads leading to Kitovu Sports Arena and accordingly deployed in various junctions in Nyendo town to prevent NUP supporters from converging.

The police also continued to pursue with tear gas, crowds of youth who followed the NUP leaders as they visited homes of some of their supporters who were killed during the campaign period ahead of the January general elections.

Kyagulanyi, who spoke to the congregation moments after mass, expressed displeasure with the conduct of security operatives but asked the church leadership not to be intimidated by what he described as the awkward conduct of the state that is deliberately intended to muzzle their voices against unfairness.

On the other hand, Mathias Mpuuga Nsamba, the leader of opposition in parliament (LoP) also MP for Nyendo-Mukungwe division, asked the church that on top of giving special honors to Ssekandi, they should also implore him to write an autobiography about his life experiences.

Earlier in his homily, Bishop Jjumba indicated that besides serving in high-profile positions, Ssekandi remained humble and has left a rare legacy when he retired with no trails of scandals following his name for the time he served in government.

But Mpuuga indicated that Ssekandi owes the country true accounts of what he has seen as he executed the various responsibilities of government he has been trusted with.

+2 #1 Rwatoro 2021-11-22 05:45
Elected President Kyagulanyi and MPs from Masaka sub-region attended the celebrations on Sunday!
Report to administrator
+2 #2 Lakwena 2021-11-22 10:40
In other words, because they are under the direct command of a confessed, Marxist, a confessed "Author and Master of Violence", Gen Tibuhaburwa; it is now self-evident that: we have an Atheistic, Godless and Heartless Police (armed forces), whose only thoughts and actions are: violence, arbitrary arrests and brutality against their fellow countrymen, women, children and their properties.

Otherwise, once a Marxist, always an Atheist (Godless). Hence only those who do not believes in God; cause harm, kidnap, bear false witness, torture, steal, kill and/or destroy others' properties.