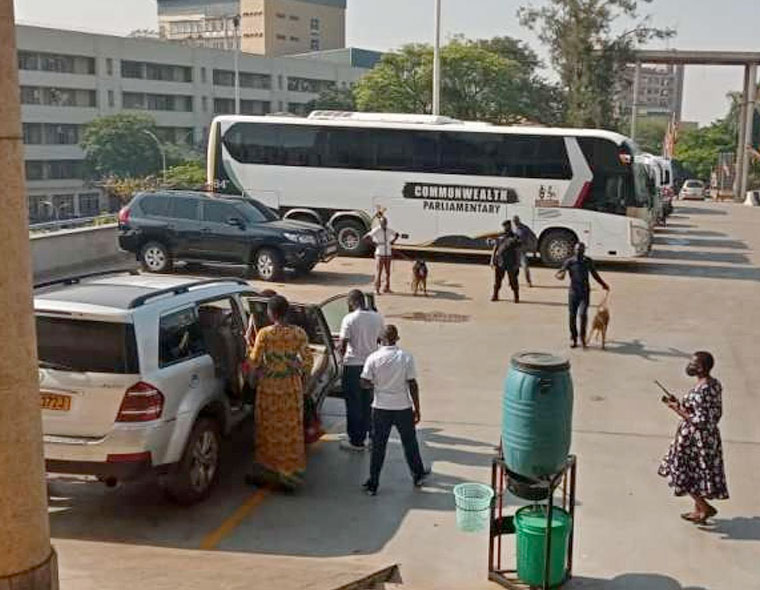 Sniffer dogs were brought in to detect any bomb

A Mercedes Benz belonging to Suzan Amero, the Amuria Woman MP, this morning caused a false bomb scare at parliament when it made a loud bang as it collapsed back into standard position.

Amero had raised the car's suspension while driving on rough roads but forgot to lower it back upon returning to the smooth tarmac. The GL20 CDI 4MATIC can be adjusted to suit road conditions including raising the car up while driving on uncomfortable roads.

The loud bang at about 9.30 am sent workers at parliament's parking lot and building scampering for dear life. One parliamentary staff was swift to rush for a fire extinguisher and run towards the car only to realize that no fire had accompanied the loud sound. Two police sniffer dogs were brought in within two minutes to check for any bombs before the owner of the car walked in to explain the situation.

Amero says that she had simply raised the car when she was driving through the potholes and had forgotten to readjust back to its normal standard position. According to Amero, the car usually pulls back down automatically if it is not moving and has been packed for some minutes.

“This usually happens, but it has helped us also to see that parliament is alert, within no time the sniffer dogs were here, and also someone was ready with a fire extinguisher, which is a very good thing as they tell us to be alert,” Amero said as she opened the car and adjusted it properly.

The sergeant at arms Ahmed Kagoye, who was first to arrive at the scene of the incident said that the sound was so loud that it caused a scare. Business returned to normal after several minutes.

The incident comes just three days after a terror attack in Kampala, one on Parliament Avenue (IPS Building) and the other at the Central Police Station (CPS) killed 7 people and injured 37 others.

The blasts were felt in parliament as it left window panes shattered, and caused the suspension of plenary sittings for two days.