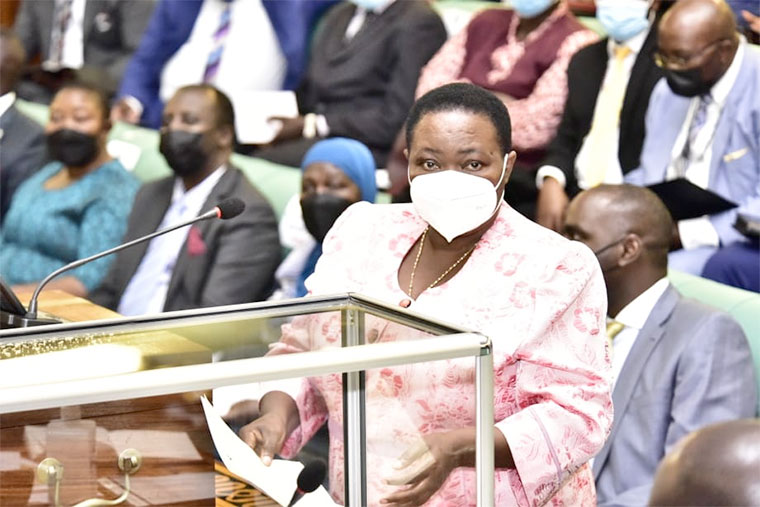 Prime Minister Robinah Nabbanja has said that the government will compensate victims of the Kampala twin bomb explosions.

The bomb explosions along Parliament Avenue and the Central Police Statio (CPS) on Buganda road on Tuesday claimed the lives of seven people and left 37 others injured.

According to the police, three of the dead were suicide bombers, three police constables, and one civilian. Delivering a statement on the bomb blasts to members of parliament on Thursday, Nabbanja said that government will organize compassionate assistance to the families of the bereaved families and the survivors.

Tororo South MP Frederick Angura asked parliament to work on its emergency procedures. He said that after the Tuesday bombings, several MPs were stranded because there was no emergency exit plan.

"Maybe this is a concern for us also here in parliament that we should be focused and be able to utilize the available places that can take care of us in such instances. Madam speaker, another issue that I thought should be of very serious concern to us is the alert. The way we alert our members, there is a problem. You will recall that after the bombs exploded and most especially this one that was near us; members of parliament others - were moving towards the gate, others were just converging in front there." Angura said.

12
+2 #11 Lakwena 2021-11-22 09:18
In other words, since the destruction and plunder of Luweero, Greater Northern Uganda, the massacre during the Kayunga Riot, the Kasese massacre and the resent Nov 2020 debacle (massacre); they try to humanize their pure evil and diabolism, by promising to compensate their victims of crime and/or organized murder.

It is the innocent Ugandan taxpayers in other parts of country who did not participate in the diabolism in Luweero, Northern Uganda and now the Nov 2020 Massacre, to foot the bills of a regime crime against its citizens (reparation).

E.g. a Bill US$.10 billion add interests in reparation for the UPDF looting, raping and crime against humanity in DR Congo, is still hanging over our heads.

And as if that is not enough Bloody tibuhaburwa keeps referring to Ugandans as idiots, pigs and parasite.