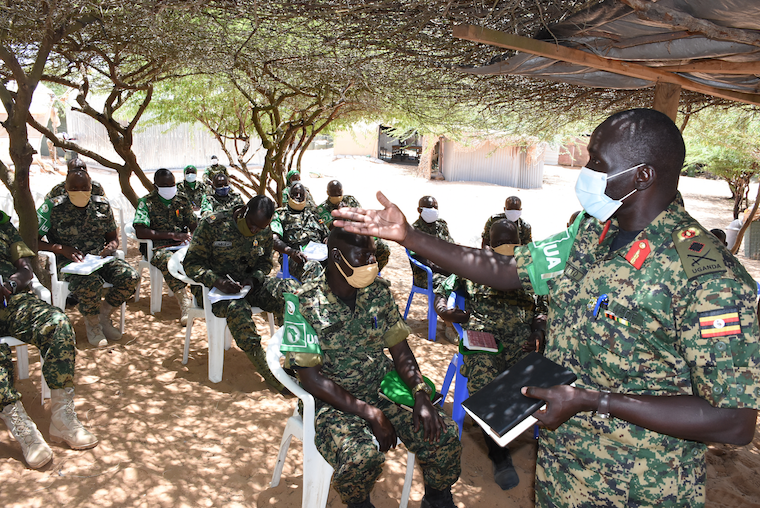 According to the judgement, the UPDF military court sitting in Somalia and chaired by Lt Gen Andrew Gutti handed Cap Charles Asiimwe and Edison Bwambale death sentences while Babu, Ichumar and Tushemereirwe earned themselves 39 years in jail.

Gutti convicted the accused persons after finding them guilty of shooting Somalian nationals to death and desecrating their bodies using homemade explosives.

Details in the judgement show that the convicts were from the 111 Battalion of Battle Group 32 attached to the Golweyn Forward Operating Base under the African Union Mission in Somalia (AMISOM).  It is alleged that on the fateful day, the convicts had gone to deliver logistics to their colleagues they were supposed to meet midway to Beldamin.

However, along the way, the convicts received information indicating that the team they had gone to meet had been attacked. The judgement shows that the convicts rounded up seven Somali civilians who they claimed were the triggermen and eventually shot them dead. They used some of the explosive devices found in the possession of the civilians to desecrate their bodies.

“They laid the bodies of the deceased persons on an improvised explosive device (IED) and detonated it causing mutilation of the said bodies. This caused a massive uproar that led to protests of Somali civilians in Golweyn area," reads the judgement in part.

This led to the arrest of the suspects and their subsequent prosecution in the General Court Martial sitting in Somalia on November 5. They were charged with seven counts of murder, which they denied. However, court records show that the prosecution adduced evidence from seven people including senior officers in the UPDF in Somalia to pin the convicts.

“Counsel further submitted that when PW3 (prosecution witness number three) Capt Vicente Benda asked A1 (Asiimwe) whether he was still with the people he arrested, A1 told him that he had received orders from above and could not explain the whereabouts of the arrested persons," reads the judgement in part.

Adding “In addition to the above submissions from counsel for the state and accused persons, this court takes note of the testimonies of Pte Opolot Emmanuel and Pte Ainobushoborozi Abraham, which essentially was that A3 Cpl Babu Alexander was their EOD (explosive ordinance device) commander and he is the one who gave them the orders to detonate the improvised explosive devices."

According to the records, Babu went with Asiimwe and stayed with him for about 40 minutes before detonating the second improvised explosive device. Prosecution witnesses also informed the court that on the fateful day, the convoy patrol from Golweyn to Beldamin was never attacked by al-Shabab as the convicts had claimed.

Accordingly, the court noted that the prosecution had proved its case beyond reasonable doubt and convicted the accused person. Highly placed security sources told URN on condition of anonymity that UPDF airlifted the convicts to Uganda on November 15.

They are currently locked up at Makindye Military police barracks pending their transfer to a government prison to commence their respective sentences. However, the convicts have a right to appeal the General Court Martial before the Court Martial Appeals Court.

Why were they brought back to Uganda? So that after being trained to be great killers, they should be left free to torment Ugandans?

Indeed, these boys were taken for training in killing tactics to come and torment us- take them back to where they were trained. Musevdeni has enough of them who are finishing Ugandans.

Yes, we have seen enough killers in Uganda day in and day out! Our eyes have now become dry due to lack of tears!
Report to administrator