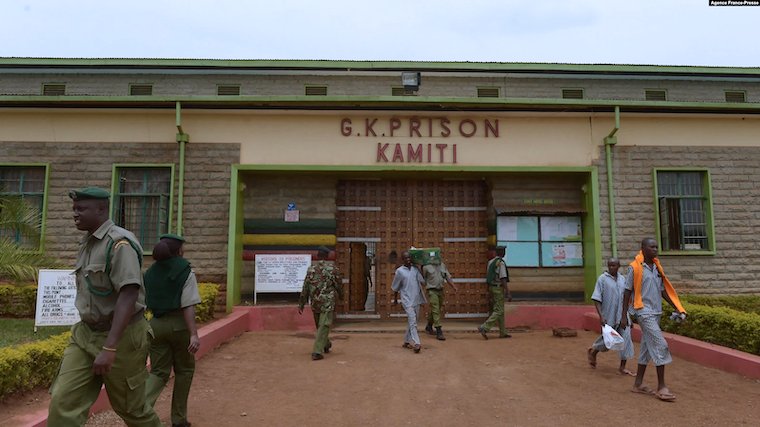 FILE - Kenyan prison warders (L) and prisoners walk past the entrance of the Kamiti Prison, in Nairobi

Kenyan security agencies are searching for three convicted terror suspects who escaped from a prison in Nairobi Monday.

One of the escapees was involved in an attack on Garissa University in 2015 that killed nearly 150 people. The three men escaped from Kamiti prison, the largest maximum security prison in Kenya. Police on Tuesday arrested seven prison wardens in connection with the escape.

Police spokesperson Bruno Shioso says the jailbreakers are still at large and the arrested wardens are helping with the investigation into how the men were able to flee.

“We just caution people to be on the lookout, to provide information so that they can cooperate with us. Now we have begun investigations to know what exactly happened. So, in the fullness of time, we will be able to share with the public once the investigation is over,” he said.

The three convicts include Musharaf Abdalla, who was convicted of attempting to attack the parliament in 2012; Joseph Juma Odhiambo, who was arrested in 2019 at the border between Kenya and Somalia for planning to join the terror group al-Shabab; and Mohamed Abdi Abikar, who was convicted his role in for al-Shabab’s attack on Garissa University in April 2015. That attack killed at least 148 people, most of them students.

The three men were housed with more ordinary criminals inside Kamiti prison, which Nairobi-based security analyst Richard Tuta says is a dangerous practice.

Some terror convicts and suspects awaiting justice have been accused of radicalizing other prisoners. Police spokesperson Shioso says the escape has prompted police to review the handling of terror suspects and convicts.

The government is offering a reward of $550,000 for information leading to the capture of the escaped convicts, who they warn are dangerous.

Shioso also warned the public against taking the law into their hands. In October, a mob killed a man who escaped from prison. Masten Wanjala had confessed to killing ten children.