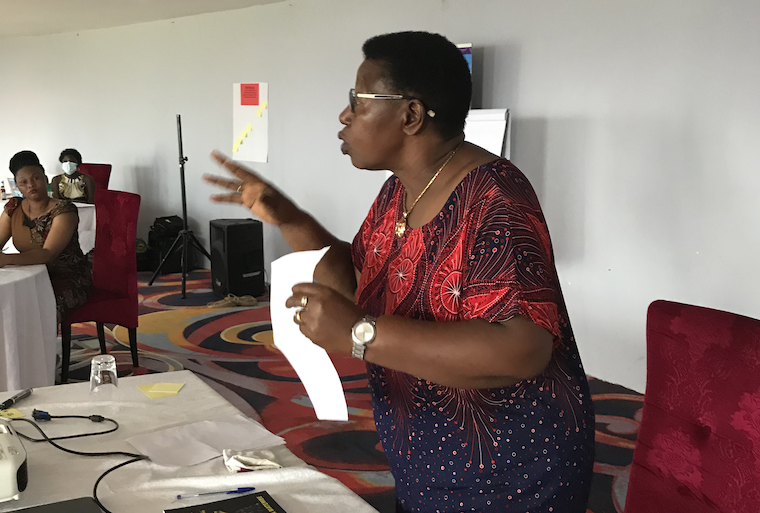 Speaking at the closure of a Forum for Women in Democracy (FOWODE) training for newly elected female MPs, Matembe said “…there are some female legislators who are not aware why the affirmative action positions were created. They now want to be like the men because these ladies have failed to live up to the expectations of the position…”

Matembe called on the female legislators to work towards leaving behind a legacy in whatever position they hold.

“…one can leave behind either a beautiful honourable life or an ugly life, and the choice is on the individual. Be consistent with what legacy you want to leave every time you wake up from your bed…”

Matembe said that the leadership positions that the MPs are holding can only make meaning only when they use them to serve other people and not themselves.

“…To leave a beautiful legacy as a political leader, you need to ask yourself why you are in that position. What is your center of service? A leader should be motivated by a vision as opposed to an ambition since the vision is to achieve a broader goal whereas ambition sprints from a desire to be better than others...” said Matembe.

“…When I was dropped from political office after serving this country without any retirement benefits, the women movement welcomed me with open hands…”

Solome Nakaweesi the lead facilitator and developer of the maiden curriculum for female MPs indulged the leaders to embrace transformative feminist leadership which explored the concept of leadership and how women parliamentarians can work towards being transformative.

Judith Peace Acham the Woman MP for Nwoya district says the training has helped her on how to make personal strategic plans towards life out of politics by identifying her priorities as a leader, setting different leaderships goals and maintaining individual discipline.

Mussolini said “…brand yourselves by writing autobiographies. After writing these autobiographies, translate them into your local languages and then distribute them to your constituents. Each of you has a story to tell…”

Emboldening Mussolini’s statement, Matembe encouraged the leaders to embrace the spirit of writing, borrowing a leaf from other leaders like Rhoda Kalema, Mathew Rukikaire who have written books about their lives in politics.

Patricia Munabbi Babiha the executive director of FOWODE reechoed their support towards seeing female legislators as the shining stars in the parliament of Uganda.

“…we are glad that we have been able to develop the first training manual for female members of parliament that have attended this training. We are proud to have you as the champions of gender equality and women emancipation….” said Munabbi.

Mussolini was a World War II bloody Fascist, who was lynched upside in a Market Square! Does she (Peace) want to identify her legacy with the thoughts and doctrine of an ambitious and notorious Fascist like Mussolini?

In other words, it is absurd! My sister has no clue about the background and legacy of the person she is trying to make reference to and/or identifying herself with.

But in my strongest opinion, it is igh time women stopped their exclusive crusade of trying to weigh up themselves against men. Just be "good" and do what is right and your legacy will be sealed.

In other words, they should graduate from sectarian "women rights issues" to the "Universal Human Rights issues" or arguments.

Wachireba?
Report to administrator
0 #2 Lakwena 2021-11-17 15:02
Besides, except propaganda (self-exaggeration driven by pride (self-importance/ and/or vanity), "good people" never write about themselves. It is others, who write about them. E.g. Socrates, one of the father of philosophy didn't write anything.

And I do not know whether e.g. Mother Teresa of Calcutta (RIP) wrote anything about herself.

In other words, because of inferiority complex and/or incompetence, some people, in self-worship desperately try immortalize themselves in either books or monuments, sic Legacy.

Lakwena please read again the article and comprehend. You will get to know the Mussolini being referred to therein.

In other words, because of correlation with injustice and crimes against humanity; in our modern history, there are some names which irks: Hitler, Stalin, Mussolini, Fidel Castro, Amin, Kim Il Sung Pol Pot and Museveni is now one of them.
Report to administrator