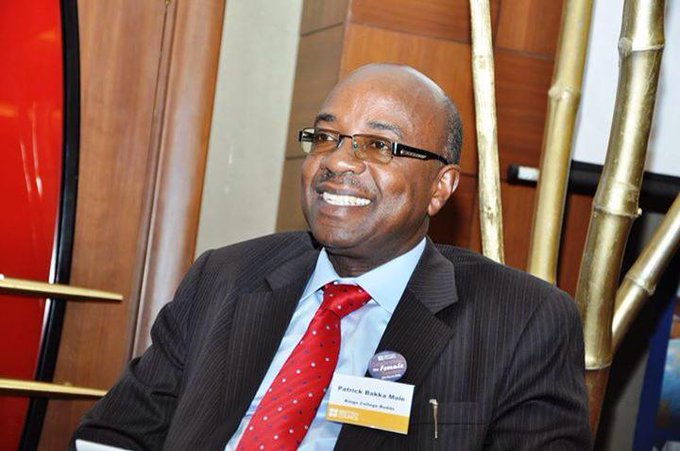 Patrick Bakka Male, who died last week aged 60, was a brilliant teacher and passionate educationist who combined astute management with eloquent wise words for his students.

When you are new to a school and someone directs you; “that one is the head prefect! For some new students, the resolution might well be to keep as far away as you can from this enforcer of law. This was my impression when I first met Patrick Bakka Male at King’s College Budo (KCB).

Immediately my idea was, to avoid trouble, keep away from this chap who imposed himself as the law. But as I would find out, Bakka was the gentlest lad you could ever meet.

Raised on the outskirts of Entebbe town, he had gone through Kiwafu primary school before King’s College in 1976 and assigned to Nigeria house. He embraced Budo unreservedly. No one goes to Budo and fails to come across born-again Christians, the Balokole! One day, in his S2, on July 5, 1977, Bakka stumbled into the school Christian fellowship meetings referred to as ‘contact fellowship.”

Dr Francis Owori, who was a class above, recalls something that happened and would forever change his life.

“Bakka Male literally got saved in my hands..!” It was the best decision of Bakka, and he would never look back.
In 1980, after he returned for A-level, Bakka decided to stand as head prefect. “There was something magnetic about him,” recalls Dr Timothy Sentongo, a USA-based medical doctor.

“He did not weaponize his voice with verbosity. His words were always few, simple and deeply illustrative.”

Most of the students were already aware of his work ethic and they elected him by landslide. He would be deputized by Jennifer Lubwama (Musisi), later Kampala Capital City Authority executive director.

Isaac Kironde, an engineer now settled in UK, recalls that soon after his election, Bakka started joking, “one day I will become head master of King’s College Budo!”

Prefects at Budo tend to suffer unintended consequences of spending so much time supervising students, returning to their studies much later. In the case of Bakka, he found he needed to attain a better score at A-level and would only join Makerere University together with the class of 1983.

At Makerere University he was assigned to Lumumba hall. It was during that time that he spotted a beautiful girl called Molly. Molly is the daughter of the famous Abbey and Florence Kibalama, a singing maestro family, known as Eschatos bridal choir.

She had gone to Gayaza high school and had been admitted to study geology. She too had made a decision to accept Jesus as a personal saviour back in 1977 while at Gayaza. Bakka attended St Francis Chapel where Molly was also a member. Late one evening while returning from a church-sponsored mission trip in Namutamba, they made a stopover at Molly’s house.

Bakka would recall “I was struck by the way Molly interacted with her parents. After making the necessary consultations with God and prayer, I proposed.” She said, “Yes!”

In 1987, Bakka graduated with a bachelor’s degree in Education and was later posted to Namilyango College as a teacher of physics and maths. Meanwhile, his relationship with Molly had matured and on September 24, 1988, which happened to be Molly’s birthday, they tied the knot at Namirembe cathedral.

In the late 80s, Budo head teacher EK Bawuba maneuvered his way around and had Bakka move to Budo. Bakka and Molly happily settled in Budo and after walking through a tunnel of fire, the Lord opened the floodgates of blessing. They saw their family grow to three boys, Peter, Paul, Joseph and a girl, Rebecca.

By 2000, Bakka had quickly progressed to deputy head teacher but there was a small problem. An opportunity emerged in 2002 when he was posted as head teacher of Muntuyera High School.

Bakka saw it as an opportunity to prove himself outside the shadow of Budo. He exported the Budo clockwork system of excellence and not only did the culture of strikes cease but the school suddenly became an academic power house in western Uganda.

Now noticed, he was moved to Mengo Senior School. There, not only did he see it become one of the best-performing schools, but also set out to build an administration bloc.

Encouraged by his progressive leadership, come 2008 and there was a switch for him to rejoin Budo as head teacher, replacing George Semivule who was moved to Mengo Senior School.

Bakka, who had by then acquired a master’s degree in Public Administration and Management from Makerere University, was met with the job of constructing a swimming pool, which he accomplished. Buoyed by this success, he moved to the next building project and fundraised to build a new administration block, which he also completed to success.

Bakka’s work would be complicated by another challenge. In 1997, Uganda introduced Universal Primary Education (UPE). Once PLE and UCE results were released, throngs of anxious parents would queue up begging for a place in a school meant initially for a population of 500 at the most, but which had since doubled but with more or less the same infrastructure.

Much as he pleaded lack of space, often going at great length to squeeze in as many, Bakka always stood hurting someone who he failed to admit his child.

Bakka could be forthright and rather blunt in dismissing off some of the requests. Once he confessed to a highly placed official disturbed about his relation with his schoolmates he had spurned, “There are two Budonians,” he shared.

“There are those who love the school and never left and are always involved in school projects. Then there are these other Budonians who left but only return and start demanding that I admit their children. I have little respect for them.” And in one uncharitable mood he went on record to say, “Budonians, already made, should learn to give others a chance!”

Feeling slighted, some of the Budonians started a campaign to have him recalled, especially when his health suffered complications. They called up ministry of Education and went on to complain to Church of Uganda as well. But there were two things which made such a campaign a dead start.

Yet, if Bakka was facing challenges with his fellow Budonians, none could match as when he decided to build a school wall and fence off the vast school land. While in 1980 Uganda’s population was at 12 million, growing at over 3 per cent, by 2008, it had risen to over 30 million.

This had led to scarcity of land and encroachers had started laying claim on Budo land, too, often using a combination of farcical historical claims or bogus state military connections. Among some of the claimants was also a certain group of old Budo acquaintances and their beneficiaries. The moment he started land fencing, they took to fighting him personally, hurling all kinds of insults and threats.

It is without saying all this must have had a stress effect on Bakka’s already fragile health. Not a man to give up, helped by the ever-available and indefatigable counsel Jimmy Katende, president of the Old Budonian club, he calmly soldiered on, and helped secure back 90 per cent of the land on top of the hill.

In October, after clocking retirement age, his successor, Fred Kazibwe, formerly of Mengo SS, was named. A number of Old Budonians, including this writer, proud of all Bakka had done, started putting together plans to host him for a job-well-done party. He had done us proud, simply. Unfortunately it was not to be.

Somewhere about November 7, a sudden rush of discomfort brought Bakka down. After being rushed to Mulago hospital, he was admitted to Intensive Care Unit. After receiving the news, early in the morning of November 9, I called up Molly to inquire how he was doing.

Her answer was not very encouraging. I sensed all was not well and assured her we were praying. About 30 minutes after hanging up, I saw a message that Bakka had passed on, just one month into his retirement.

When he was in Senior 2, Bakka served as school timekeeper. The timekeeper at Budo is the chap who wakes up before the rest and rushes even through the rain to sound the drum that wakes the school up.

As I often lay in my bed catching up on my sweet sleep and usually the last to rise, I had this curiosity what kind of kid was that who instead of enjoying his sleep decided to deny himself and serve the rest. For all his life, Bakka was a timekeeper, serving others.

Some of Bakka Male’s famous quotes

• Aspire to inspire before you expire

• Yesterday is history, tomorrow is a mystery but today is a gift! That’s why we call it Present

• In this era of information and technological explosion, you must develop your power of selection

• It’s more honourable to fail than to cheat

• Focus on the roots and not the fruits

The writer is an associate professor of management