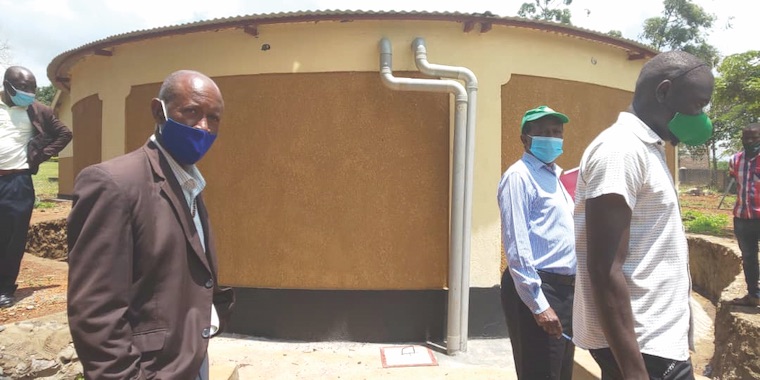 A construction startup, which uses locally available material to build big stone tanks to harvest rainwater, has made a breakthrough in supplying clean water to rural schools, writes MOSES MUGALU.

The 100,000 to 500,000-liter ‘Walugendo Model Tank’ could become the game-changer in rural schools without access to piped water or are nestled in water-stressed areas.

Through a three-year pilot project, UMUDRU, the construction firm behind this Walugendo Model innovation, has built six tanks in schools in parts of Mpigi and Kikuube districts.

The results are impressive, according to the beneficiaries. Kiziranfumbi SS (Kikuube district), Riverside High, Katuso Vocational, and Mbazzi PS (all in Mpigi district) are some of the schools that have installed Walugendo model tanks through the pilot.

Rita Namutebi, a teacher at Katuso Vocational and Primary School, says the water storage facility has come in handy for both teachers and learners, who used to fetch water from a community borehole.

“Life will be easier for us; gone are the days when we had to walk almost two kilometres to the borehole for water,” she said in an interview on November 14.

Katuso has installed a 250,000-litre Walugendo model tank. Hussein Kato Rita, the UMUDRU project manager, says such a tank can serve the school’s water needs for the entire year.

This is one of the projects that Uganda Water and Sanitation NGO Network (UWASNET) pushing to assist learners in rural schools to access clean water. Last week, Kato presented the UMUDRU pilot scheme results after the regional UWASNET-organised tour of such projects in Mpigi, Masaka, Lwengo, Kyotera, and Rakai districts.

Education experts say improved sanitation and hygiene facilities in schools with clean water have a proportional impact on learner enrollment and academic performance. And, UWASNET, which brings together more than 165 NGOs, wants to aggregate sanitation facilities in as many rural schools.

Despite the prolonged lockdown due to the Covid-19 pandemic, UWASNET partners have been actively involved in building facilities such as washable latrines, installing clean drinking water, and hand-washing lots at various schools and health centers. They expect better results when schools reopen in January 2022.

For Walugendo model tanks, the main materials used include big stones, sand, murram, iron sheets, and cement. The sizes vary depending on the institution’s needs. To leverage the cost, UMUDRU partnered with Australian donors, The Charitable Foundation (TFC), to train its engineers back in 2018 when the innovation started implementation.

Already, the ministry of Water and Environment has given their technology a green light but Kato says UMUDRU’s main challenge is marketing the technology to the rural communities. They also have limited manpower.

With abundant rainfall almost guaranteed throughout the year, officials argue that rainwater harvesting is the ultimate solution to rural schools’ water needs.

There have been similar efforts by civil society in other regions of the country to combat sanitation and hygiene issues in schools. In Busoga, many schools have benefitted from another pilot project of constructing washable latrines and hand-washing lots.

Local officials say results from this pilot scheme are encouraging as learners are now bracing to return to class and hygiene has greatly improved at schools.

“I’m confident most parents will send their children to this school because of these wonderful facilities,” Wilberforce Ntumba, the LC III chairman, Ikumbya sub-county in Luuka district, says.

In Ntumba’s area, Ntayigirwa primary school, a government-aided school, recently got two spacious washable latrines that are equipped with water storage tanks. The latrines were constructed by Water For People, one of the NGOs in the UWASNET forum.

Ntayigirwa school authorities are expecting the pupil enrollment to jump up to three thousand, twice the number they had before the lockdown started last year. The good news is that they will not squeeze into a single-block two-stance latrine, which the school had then. Instead, the pupils will have some privacy and cleanliness in the newly constructed facilities.

You see, the politicians have never thought about harnessing the vast water sources in our country.

We are the refuted "Source of the Nile" and not a drop for ourselves, animals and crops. This is the beginning of the 'green revolution' so to speak. Keep up the good work!
Report to administrator