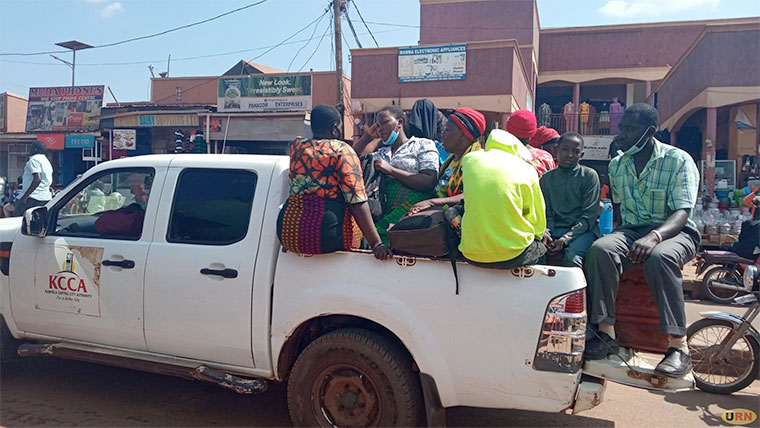 Kampala Capital City Authority (KCCA) casual workers in Kawempe today staged a peaceful protest over the nonpayment of their salary for the months of September and October 2021.

The protest in Kawempe was triggered by the death of their colleague; Sam Lugya Nsamba who fainted last week while on duty sweeping Buwambo road in Mpererwe.

The workers say KCCA has not made any communication as to why they haven’t been paid yet they are still working, sweeping the streets, desilting drainages, and collecting garbage in the city.

Sulaiman Kayongo, the head of garbage loaders says that several of their colleagues are struggling to survive amidst nonpayment. He is afraid many might suffer mental breakdowns due to stress for nonpayment and lack of job security.

Another casual worker, Ssalongo Joseph Katende says their supervisors demand that they turn up for work every day and yet don’t address their salary demands. He adds that when they ask for payment of their salary arrears, they are instead asked to quit if they no longer want to work. Katende says Nsamba had lost accommodation and sought shelter in a ramshackle structure in Lusanja due to lack of money to rent a decent home.

The workers are dismayed that KCCA has failed to pay them despite their salary being so meager. They earn between Shs 150,000 and Shs 180,000. They narrated how they work under hard conditions cleaning drainages without proper protective gear but continue soldiering on in pursuit of better livelihood.

The contracts of these casual workers expired on 15th September 2021 but they have continued to work since this is not the first time they have experienced lapses in contract renewals.

However, they are skeptical this time round as another company called 7 Hills is competing with them to do the city cleaning job. They don’t know if KCCA has laid them off since there has been no communication.

Ashraf Jjuuko, the acting chairman of the Kawempe Division Community Saccos says KCCA should pay all workers and also pronounce itself on their contracts.

KCCA acting spokesperson, Juliet Bukirwa says that they are in touch with the family of the deceased and shall extend all the necessary support and that his salary arrears shall be extended to his family.

Asked if all casual workers shall be paid despite their contract having expired since they are still being made to work by the supervisors, Bukirwa said she needs to make more consultation. But she says KCCA is working to streamline contracts of casual workers. KCCA offered to transport Nsamba's body to his burial grounds in Mubende.

+7 #1 Akao 2021-11-16 06:07
What a shame this country has become! Meanwhile there are so many within the government who get overpaid for doing absolutely nothing.

When you hear him talk about pan Africanism, you think, he should start by caring about those within Uganda. How do these people go to bed and sleep?
Report to administrator
0 #2 Akot 2021-11-16 14:20
Quoting Akao:

What a shame this country has become! Meanwhile there are so many within the government who get overpaid for doing absolutely nothing.

So, why is the divisive tribalistic system that disempowers Ugandans, but ensures Museveni's post, still standing?

+35 years on, Ugandans are at peace waiting for Museveni to finally look at them as humans!

Ah! Ugandans are going to ensure Museveni rigs yet another fake election, to ensure his 45 years in power!

Tribal leaders MUST become real Ugandans, stand down to give chance to UNITY that will stop Museveni & family owning Uganda for good!...
Report to administrator
0 #3 Akot 2021-11-16 14:28
...Museveni got what he fough for & has assured his family heritage, but Ugandans, in UNITY can stop them!

But Ugandans believe their country started with Museveni & won't survive without the evil family!

Why have Ugandans surrendered their land, lives to Museveni & family?

The outside world will watch in silence as long as the peopl to whom tribal lands that form the zone are tribally divided & ruled, as it's them who still want/need Museveni & family!

As it is, opposition leaders still pretending to be so, only bolster Museveni!

But the opposition leader who will call tribal leaders to stand down & to UNITY, will be a real Ugandan & help give a new start, without Museveni & family around!

Until then, opposition leaders are fake as they only ensure the fake democracy & Museveni's family business!
Report to administrator
0 #4 Lakwena 2021-11-17 07:55
Quoting Akao:

What a shame this country has become!

How do these people go to bed and sleep?

Okao, the bloody NRA/M leadership came directly from Hell. Otherwise, how else could Tibuhaburwa have told off Ugandans that he is neither their servant nor employee.

And where does such brazen and callous public statement, leave his apologists who say that the man sacrificed a lot to liberate Ugandans from the vagaries of his Swine predecessors.

In other words,bloody Tibuhaburwa didn't sacrifice even a straw. But sacrificed the people of Luweero, and especially the Banyarwanda refugees he used as human shields on the bloody alter of his greed, megalomania and vanity.
Report to administrator