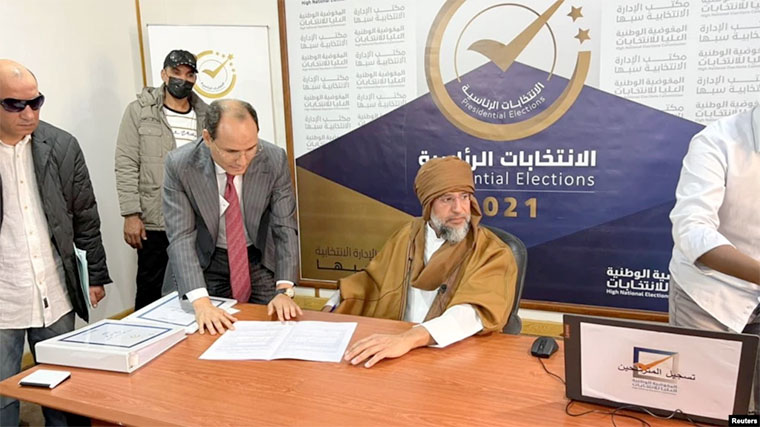 The son of late Libyan strongman Col. Muammar Gadhafi has registered his candidacy for president of Libya. Seif al-Islam Gadhafi submitted his paperwork Sunday in the southern oasis town of Sabha. The move comes ahead of elections set for December 24th.

Arab media showed video of Seif al-Islam Gadhafi formally registering to run for president of Libya in next month’s elections. Gadhafi wore traditional Libyan garb, covering most of his head, and was sporting an untrimmed beard. Gadhafi is thought to be living in the western town of Zintan.

Gadhafi appeared to be fairly upbeat as he spoke to those around him after announcing his candidacy. Gadhafi has not been seen regularly in the nearly 10 years since his father was overthrown and killed during the 2011 revolution.

A spokesman for the International Court of Justice in The Hague told the news media that Sunday's announcement does not change the court's demand that Gadhafi be extradited and tried for crimes against humanity in connection with the uprising.

He says that Seif al-Islam Gadhafi presented his candidacy in Sabha, a region controlled by (eastern military commander Gen. Khalifa) Hafter, adding that supporters of Gadhafi's father have a strong presence in various parts of southern Libya as well ... A major sticking point in the upcoming election, he goes on to say, is who is going to decide which candidates can run, and if the candidate who ultimately wins will be acceptable to all parties, including the militias across the country.

Libya has had two rival governments – one backed by the UN in Tripoli and one in the eastern part of the country. Currently, there is only one government, the UN-supported one.

Egyptian media have warned that the Islamist militias which control Tripoli are likely to support a candidate from the Muslim Brotherhood group, which is now outlawed in Egypt. Candidates from eastern Libya, including parliament speaker Aquilah Saleh and Gen. Khalifa Hafter, are not likely to be acceptable to the Islamists, either.

Paul Sullivan is a Washington-based Middle East analyst. He tells VOA that Libya needs to be free of what he calls “the dreadful Gadhafi rule.”

Sullivan says that if the choice comes down to Gadhafi and the Muslim Brotherhood, then this is an example of the idea in life that one has to choose between the lesser of a bad decision. He says it should up to Libyans to make that choice. An international conference on Libya took place in Paris this past Friday with the topic of the coming elections on the agenda.

0 #1 Lakwena 2021-11-16 10:10
In other words, instead of looking for his mother and sister lost in the Sahara Wilderness, and take care thereof; at the risk of being lynched this time around like his father in a sewer culvert,; this bloody Anti Islam Qaddafi (Seif al-Islam Gadhafi) wants to come back to revenge the lynching of his "dreadful father".
Report to administrator