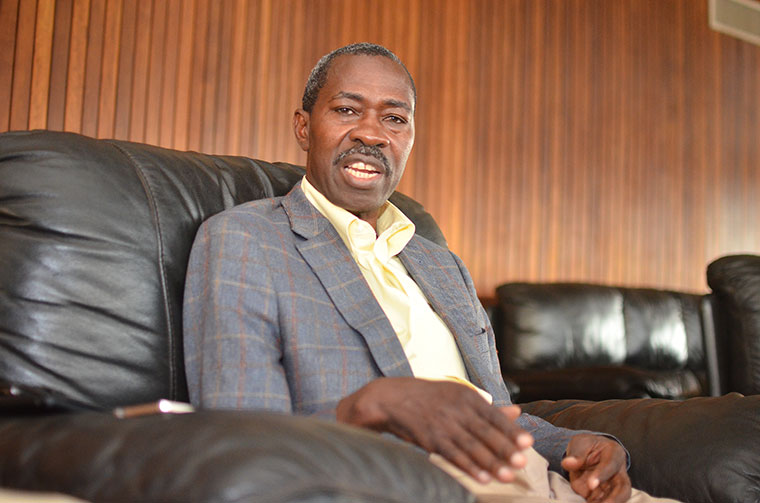 The State House land department has blocked former state minister and Uganda's representative to East African Legislative Assembly (EALA), James Kakooza from carrying out developments on a disputed piece of land in Lubowa.

It comes days after police blocked Kakooza from demolishing property on the disputed land in Kyeyagalire village in Lubowa, Waksio district. Police detained the legislator briefly at Lubowa police station on allegations of malicious damage before releasing him on bond.
Now, Susan Abbo, the senior private secretary to the president and head of the land department has directed Kakooza to "halt all his intended activities on the contentious land, until this matter is finally disposed of in courts of law.”

The department intervened following a petition by Kakooza's neighbor Gertrude Nalweyiso on November 9. Nalweyiso accuses Kakooza of grabbing land that includes the entrance to her home. The dispute started on October 31, 2021, when Kakooza deployed a tractor to demolish the perimeter wall that Nalweyiso says acted as the boundary between her and Kakooza’s land. The disputed land measuring 0.22 acres is found behind Roofing Uganda Limited.

State House officials visited the land during the week. On November 12, Abbo presented her findings to Nalweyiso and Kakooza's representatives. Kakooza did not attend the meeting that was held at 4 pm. In her report, which our reporter has seen, Abbo noted that her team interacted with Kakooza and asked him to produce the sale agreement and land title.
The team also engaged one Simpson Murungi who sold land to Kakooza, who said, "At the time of selling his property to Hon. Kakooza, the land was already fenced with a perimeter wall, and that he wonders why Hon. Kakooza wants to disturb Ms. Nalweyiso Getrude's peaceful stay on their kibanja since they found them there."

Abbo says Murungi told her team that he sold Kakooza land measuring 68 feet by 68 feet that was already fenced. She said that unless evidence is bought to show that the legislator bought a kibanja that had more land, there is no basis for him to claim what is beyond the land he bought.

Murungi advises Kakooza to work within the size of the land that he rightly acquired. Abbo said that "I have not stopped Hon. Kakooza from carrying out activities within the 68 feet by 68 feet piece of land. He should steer clear of property beyond that measurement."

She noted that while Kakooza presented a land title to claim part of Nalweyiso's property, Abbo says it contradicts the measurements in the sale agreement for the kibanja.
"The sale agreement is the motherland title at the Buganda Land Board and that is what we must all respect,” she said.
Nalweyiso has welcomed Abbo's findings and orders, saying. "This is fair and we hope that Kakooza will comply."
She says Kakooza's reaction to the report will determine her next course of action. "If he complies, then we shall conclude this matter. If he remains stubborn and insists on grabbing my property we shall go to court."

In response, Kakooza said, "State House land department has no jurisdiction on private land, so if anybody is aggrieved they should go to court." He sarcastically added the State House should probably facilitate the complainant to go to court.

Earlier, Kakooza told our reporter that he bought the land from someone who held the title from 1991 but Nalweyiso said she had been on the land since 1992.
"I have a land title but she has not presented hers. So, whoever alleges, must prove and when you don't prove then, those are rumors," he said.

Nalweyiso explains that Kakooza who claimed to have surveyed his land on February 25, 2021, did not involve her during the survey exercise yet when she applied for a lease title from Buganda Land Board for the land near Kakooza's plot her neighbors signed the survey report. She says that she is yet to get a title after completing a payment of Shs 12.4 million to BLB.

Otherwise, except indelible animosity, what does neighborliness mean; and what more satisfaction will Kakooza get if he grabbed a few more feet of Madam Gertrude Nalweyiso piece of land?

In other words, widely impoverished; while many Ugandans are only looking for somewhere to hung their Mosquito Nets, but the Kakooza of this country: full of themselves, heartless, greedy, cruel and foul, want the whole country as personal property.