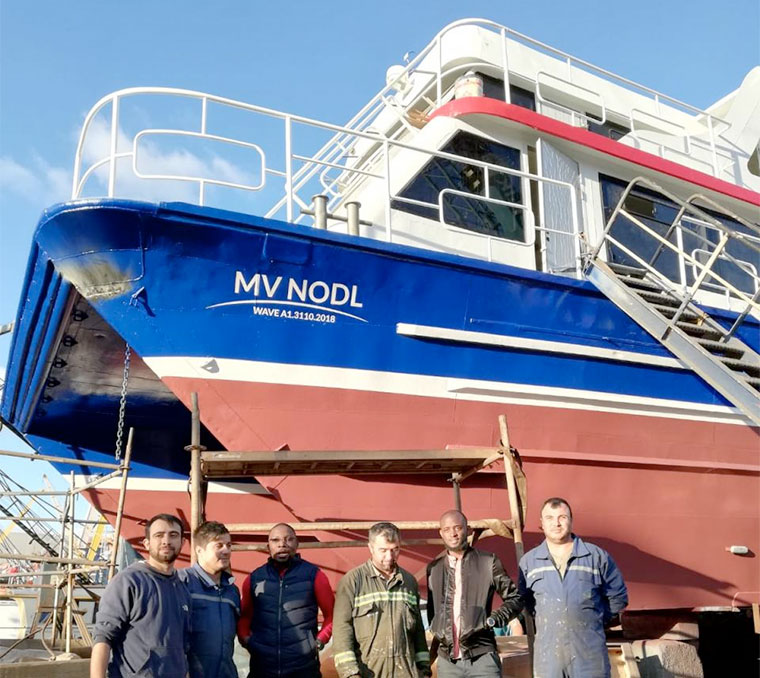 Musoke says NODL's contract with the ministry of Works requires it to among others; provide an alternative water vessel when MV Kalangala is away for routine maintenance, in times of accidents or when there is an overwhelming number of travellers.

"This new ferry was long overdue because MV Kalangala has to undergo mandatory survey beginning of December because it has operated with the same gearbox since 2005. The gearbox must be replaced and this will take two weeks. So we must get this new ferry on the water soon," Musoke said.

In the absence of MV Kalangala, travellers and business people who ply the route and want to use their vehicles resort to MV Ssese and MV Pearl ferries at Bukakata in Masaka. However, this increases the cost for travellers from Entebbe to Masaka before connecting to Kalangala. They need about Shs 120,000 on a single trip of over 8 hours.

Musoke explains further that the new ferry is also important in absorbing the high number of travellers during the festive season. With the capacity to carry 100 passengers, 165 tons of cargo, and 4 buses, MV Kalangala is one of the major vessels plying from the mainland in Entebbe to Kalangala.

It operates one return trip between Entebbe and Kalangala, departing Entebbe daily at 2 pm and returning the next day at 11 am. However, Musoke says that the new ferry, yet to get its route chart approved by the Works ministry, will only carry passengers.

"MV NODL will carry 200 passengers. It will not load cargo or vehicles because MV Kalangala is there and these items occupy space that could carry over 100 passengers," Musoke said.

He says carrying only passengers is more profitable because "on MV Kalangala we charge each vehicle Shs 50,000 and that's about Shs 500,000 for ten cars per trip and yet this space can carry 150 passengers who could fetch us Shs 4 million."

In any case, he says passengers will provide business opportunities to the public and private transport service providers in Kalangala, resulting in improved livelihoods for residents and business people who are not even involved in tourism. Musoke says that much as passengers are excited about the new ferry, they should wait for the proposed transport fares.

It is estimated that MV Ssese, MV Pearl that ply Masaka-Kalangala route and MV Kalangala spend Shs 2-5 million on fuel per trip to or from Kalangala. He is optimistic that the new ferry will start operations by mid-December. He hopes that MV NODL will expand the current network by picking passengers from Port Bell in Kampala, Nakiwogo in Entebbe to boost tourism along Kampala-Entebbe and Kalangala-Entebbe routes.

MV NODL has been in the pipeline since 2018. It was initially expected to commence operations in December 2018 to serve Kalangala's outlying islands. All the major water vessels dock at Bugala island. Kalangala comprises 84 islands. However, Musoke says the plan has since changed, with the aim of increasing trips along the Kampala-Entebbe route.

Godfrey Mayinja, a resident of Manyago in Entebbe wants the new ferry to charge under Shs 40,000 per trip. Mayinja says the new ferry will relieve frequent travellers to and fro Kalangala because they will have another cheaper option other than using private speed boats.

Mayinja adds that passengers from Kampala will no longer have to bear with the heavy traffic jams along the Kampala-Entebbe highway to board ferries or boats at Nakiwogo in Entebbe. Currently, MV Natalie and Vanessa that ply the same route charge Shs 35,000 for a single trip to Kalangala and Shs 70,000 for a return journey during the week.

The vessels also charge Shs 45,000 for a one-way ticket and Shs 85,000 for a return journey on weekends. The vessels take an average of one hour and half hours on water because they are speedboats. Meanwhile, local boats charge Shs 25,000 per trip. The journey is about three and a half hours.