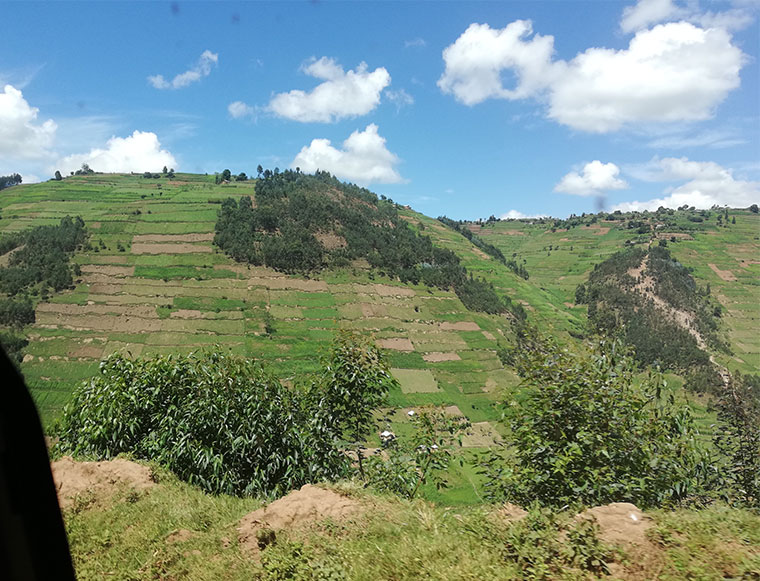 FILE - Hills in Kabale. Locals have accused Rwandans of grabbing their land and planting trees

There is fury among residents of Maziba sub-county in Kabale district after Rwandan nationals allegedly grabbed their land on Kyaninanuunu hill and started planting eucalyptus trees.

According to the residents, an unspecified number of Rwandan nationals from Gisuru village in Nyagatare district, Nothern Province illegally crossed into the area early this year, grabbed two hectares of land on Kyaninanuunu hill in Rukore village, Kahondo parish - about five kilometers inside Uganda’s territory.

Leopold Twesigye, a concerned resident of Kahondo, says that with the protection of uniformed Rwandan security personnel, the Rwandan nationals keep returning to look after the trees.

He says that as locals, they'd ignored the invasion until last month when the Rwandan nationals threatened to expand their tree plantations and ordered locals to vacate the land immediately after harvesting their crops.

"I have raised this matter because it is very serious, Rwandan nationals are crossing into Uganda and planting trees in Maziba sub-county. They are grabbing our land and planting trees. We don’t know what is going to happen, they are always protected by armed security operatives. We found them in our land. The security operatives that guard them don Rwandan army uniform. They have planted eucalyptus trees." said Twesigye.

Twesigye says that part of the land occupied by the Rwandans belongs to Ugandan nationals while the other is public land they have previously been using for grazing. He claims that the Rwandan national targeted the village with a hilly topography, which cannot easily be accessed by Ugandan security.

Moses Bikorwomuhangi, the Maziba sub-county LC V councillor, says that as local leaders they are very angry with the Rwandan invaders. Bikorwomuhangi says that locals tried to resist the invasion in vain because the Rwandan nationals were under the protection of armed personnel.

Sarah Tumubweine, another resident of Rukire village accuses the Rwandan nationals of attempting to uproot British Protectorate (BP) 34-mark stone that separates Uganda and Rwanda to extend their territory inside Uganda.

Godfrey Nyakahuma, the Kabale resident district commissioner, says that the district security committee is aware of the problem. Nyakahuma says that security officials visited Kyanyinanuunu hill last week and saw the two hectares of land grabbed by the Rwandan nationals.

According to Nyakahuma, they ordered the Rwandan tree owners to uproot them from Ugandan soil after claiming that they were ignorant about the boundary. Nyakahuma says that the act of the Rwandan nationals is a clear provocation against Uganda.

"We moved to the ground to establish the facts and upon reaching Kyaninanuunu hill, what we found that was true is that the [Rwandans] had entered into Uganda and planted trees at the bottom part of the hill and they were warning Ugandans who had planted beans along the top of the hill that upon harvesting their crops they must vacate that land such that they continue with the planting of trees up to the top of the hill. Good enough we found a contact person of the Rwandese government who monitors the borderline…we talked to him and he seemed to have realized that it is true that the people in Rwanda entered into Uganda, violated actually the Uganda boundary line, and planted trees," said Nyakahuma.

Nyakahuma says that security officials will return to the hill in two weeks’ time to confirm whether the trees have been uprooted, adding that in case the Rwandan nationals don’t comply, they will forward the matter to the relevant ministries for handling. According to Nyakahuma, in addition to grabbing Ugandan land, Rwandan nationals have been crossing to Maziba through Mukokye and Kavu porous borders to steal goats, cows and iron sheets from residents' houses.

"My security team was supposed to go back after two weeks to ascertain whether those trees have been removed. Now, if we still find those trees still in the land, then the information will be forwarded to the appropriate authorities. The whole of the bottom Kyaninanuunu hill is already planted with trees and already what we found was that as these people come from Gisuru which is the neighbouring village, Nyagasare district, they enter Uganda, take people’s goats, beat up people and to us, it is something unacceptable," added Nyakahuma.

Chris Baryomunsi, minister for Information Communication Technology (ICT) and National Guidance says that the government through surveying experts will conduct thorough investigations into the dispute and liaise with the Rwandan government to resolve the matter because the Uganda-Rwanda borderline is visible and clear.

"Actually the ministry of Lands, Housing and Urban Development is spearheading a project that has been working on redefining and clearly identifying the boundaries and the borders of Uganda. So if it has happened that our brothers and sisters from the neighbouring country of Rwanda have planted trees on the side of Uganda, then that will be sorted out by clarifying the boundaries using the technical people from both sides. We hope it is not just a sign of provocation, we refuse to be provoked and we don’t have any issues with Rwanda," said Baryomunsi.

On February 27, 2019, Rwanda closed its borders with Uganda following an advisory by President Paul Kagame to his nationals against travelling to Uganda, saying their safety is not guaranteed. He accused Ugandan authorities of abducting Rwandan citizens and locking them up in non-designated areas.

He also accused Uganda of hosting and facilitating dissidents especially from Rwanda National Congress (RNC) and the Democratic Forces for the liberation of Rwanda FDLR, which have declared war on the Kigali government. However, Rwandan nationals have continued crossing to Uganda illegally.

I actually know a Surveyor who was sent to that area to participate in the Survey, so what is going on is official

So, in short, Rwandese are sure Museveni is completing conquest of territory & Uganda will be theirs soon!

wow, so they have finally planted boundary marks, that means they hired Surveyors to do that and am sure they have a boundary opening report.

there is a possibility that part of Uganda has been sold to Rwanda, it is an extension of home. For those who have brains, you know what i mean

Ugandans MUST WAKE UP!
Report to administrator
0 #13 Expedito 2021-11-16 21:44
No need to worry. All that will be reclaimed when presidential power in Uganda shifts from western to another region.

Like how the asians were expelled, history will repeat itself this time in the worst recorded way in Uganda's history.
Report to administrator
12