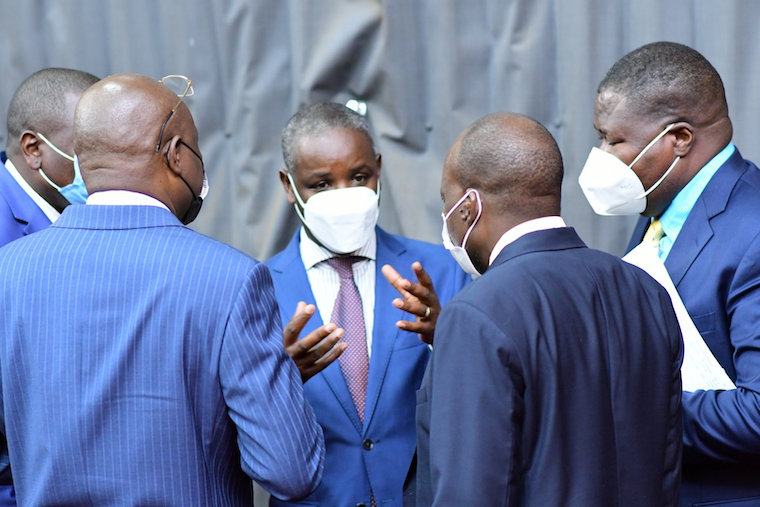 Publicly, resentment has gelled into strong opposition to President Museveni’s push to introduce legislation scrapping bail for capital offenders. And behind closed doors, the NRM leadership is cobbling together a plan to muscle the controversial draft legislation through parliament.

Gathered in the parliamentary conference hall last Wednesday, a group of NRM heads of sectoral committees, who are influential devotees of the ruling party in the House, got a stern warning from the party Chief Whip Thomas Tayebwa.

“Mzee is aware that this proposal is very unpopular. But I want to tell you that however much you oppose it, it will have to pass because he (president) wants it. This is the message he sent me to tell you…” Tayebwa reportedly told the committee heads.

Tayebwa couldn’t be reached for an interview on Monday. His assistant who picked his known mobile phone number said the chief whip was in a cabinet meeting.

We, however, interviewed the NRM Caucus Chairperson Herbert Kinobere (MP Kibuku), who is in effect the chief whip’s deputy. Kinobere confirmed that Tayebwa chaired the meeting last Wednesday.

“I missed the meeting with sectoral committee leaders but among the issues that were supposed to be discussed was the issue of ensuring that they (committee chairpersons and their deputies) always support party positions. When a bill is before us and it is from the principal, the president, I don’t expect any NRM MP to oppose it. It is like we would be undermining the decisions of the principal…” he said on Monday.

“He is there for the people, so we always feel that when he brings an issue, we discuss it with the leaders we have in Parliament before we go to the party caucus for the final decision. For the current issue of bail, members were asked to consult…Because when the president said go and consult it was not that you go to the villages but we consult legal friends, review information, you do your personal investigation …such that when we meet as a caucus, each individual is given a chance to talk before the president and then as a caucus we shall always come up with a way forward,” he said.

NRM, which is the dominant party in parliament, controls about 16 committees with a membership of about 30 MPs each. It also has majority MPs, about 336 of the 529 lawmakers. The opposition has 109 MPs and the rest are independents (74) and military (10). So it’s a given that President Museveni won’t have a problem getting his amendments passed by Parliament.

When President Museveni summoned the NRM caucus to discuss the proposed bail legislation on September 28 at Kololo Ceremonial Grounds in Kampala, he faced a defiant mood from his community of devotees.

Most NRM caucus MPs urged the president to drop the idea. They said the right of a suspect to apply for bail, pending prosecution, is a matter already settled in law. They also begged for more time to consult their constituents and meet again.

A source said as soon as the president left the Kololo meeting, he called Tayebwa and asked him to whip his troops into line.

On October 15, cabinet approved the criminal justice reforms, including amendments to the 1995 Constitution and the Police Act, to deny suspects on capital offences bail or police bond.

The Attorney General Kiryowa Kiwanuka, according to Daily Monitor, presented a brief on the proposed amendment to Article 23(6) (b) of the Constitution to provide that any person accused of committing an offence triable by both the High court and subordinate courts, shall not be granted bail until after 180 days or trial commencement, or when the Director of Public Prosecutions (DPP) discontinues proceedings, whichever is earlier.

The Attorney General also proposed that Article 23(4) (b) and Section 25 of the Police Act be amended by Parliament, both of which require a suspect to be released on police bond if not charged in court within 48 hours, to qualify the period as “forty-eight business hours”.

“For somebody to kill a person and you give them bail is a provocation. It is abominable. I would like us to cure this ideological disagreement. This bail, what is the hurry? Who are you trying to please?” Mr Museveni wrote.

“Some judicial officers & the police are doing things which have no connection with reality. Bail for criminals is a right? How about the rights of victims? People are being killed but you are defending criminals- suspects of criminal offences?’’ he added.

The president is expected to call the NRM caucus again to whip up a consensus. The NRM- leaning independents will also attend the meeting. After the caucus meeting, a draft legislation with the proposed constitutional amendments will be sent to Parliament for first reading.

Eron Kizza, a human rights lawyer, told Sunday Monitor that as for scrapping bail, personal liberty is inherent, it’s God-given and no man-made laws can deal away with it.

“The amendment will be severely resisted. The architects of these draconian laws will soon be caught up by the same laws but it will be too late. The main objective is curtailing the Opposition politicians using the same laws which are unfortunate,” he said.

Interviewed by The Observer, Matthias Mpuuga, the leader of Opposition in parliament said, “Whereas I was so agitated about the age limit (removal), I’m not bothered at all about undoing bail. I want whoever wants bail denied to do so.”

“Historians remember the 1968 laws of detention without trial and remember who the victims were. So, if people want to make a law, which has eyes, I want to assure them that history repeating itself is a preserve of fools. Let them make that law believing that it’s targeting their opponent. It will catch up with them just like it caught up with the previous fools. I have said it severally that I will not try to convince the ruling party MPs not to enact that law. If they believe its right, let them enact it for their people…” he added.

In the same meeting last week, Tayebwa also told the NRM committee heads that bribery was so rampant in parliamentary committees. He said too much money is exchanging hands.

“We are aware that there’s a committee processing a bill, which has received money…” he said.

Accusing fingers pointed to the Gender committee, which is processing the NSSF Amendment Bill. The warning comes on the coat-tails of a stern warning issued by speaker of parliament Jacob Oulanyah to government departments weeks ago. He warned government officials against funding parliamentary committee activities without the express approval of the speaker. He said by doing so they compromise the committees.

According to sources, the Gender committee met ministry of Finance officials and was later hosted to an exclusive luncheon at Serena, Katonga Hall.

Ask Kaka where his son is. Is position didn't save his son who committed a crime. As long as one is still breathing shouldn't take this in a vacuum.
Report to administrator
+1 #12 kikabi 2021-10-27 22:54
why cant MPS constitute a commission of inquiry about the people who died in luweero, eastern ugandan and nothern uganda plus kasese.

I think this is the time to get the killers and be tried under the new arrangement. Of course, parliament cant do anything, these ugandans complaining when it comes to voting they vote NRM.

the man only uses his majority in paliament to bring bad laws. if he has 150 MPS, he could not do all the bull shit he is doing. he has potato growers and you can see,he has ordered them and stupidly they will all oblige to vote for him.

Do Not blame opposition when you send few numbers there. western uganda decided not to vote, always, soldiers vote for them and they happy about it.parliament is a game of numbers, until citizens learn that, uganda is doomed.
Report to administrator
0 #13 Wainanchi 2021-10-27 23:41
But Lakwena and other idiots ,!
What seems to be vthe problem?

However Mzeevand his followers found the right medicine how to combat this disease.

Besides Ssebo has years long experience as an experienced doctor who helped solve many nasty problems in Uganda and he.will manage also this nasty legal problem

Why cant MPS constitute a commission of inquiry about the people who died in luweero, eastern ugandan and nothern uganda plus kasese?

parliament can't do anything, these ugandans complaining when it comes to voting they vote NRM.

...the man only uses his majority in paliament to bring bad laws. if he has 150 MPS, he could not do all the bull shit he is doing. he has potato growers and you can see,he has ordered them and stupidly they will all oblige to vote for him.

...parliament is a game of numbers, until citizens learn that, uganda is doomed.

If Ugandans don't want to end the tribalistic system & UNITE to ensure Museveni is out, they MUST not vote in next praliamentary election & continue pretending it's democracy in the shithole ruled by Museveni since 1986!
Report to administrator
0 #15 Akot 2021-10-28 13:03
Quoting Willy not Silly:

...however much you oppose it, it will have to pass because he (president) wants it. This is the message he sent me to tell you…” Tayebwa reportedly told the committee heads.

Must I convince you that President "Mzee" is becoming more malicious and evil?

This is the last chance for the people's representatives (MPs) to save the Parliament and prevent the looming Injustice.

What is the difference between having no parliament and having a parliament that is always forced to do whatever the President desires?

Until Ugandans decide otherwise, Museveni is Uganda & Uganda is Museveni!

Is there any reason Ugandans continue to elect mps & pretend it's democracy when the shithole belongs to Museveni who will leave the seat to his son?
Report to administrator
0 #16 Akot 2021-10-28 13:09
Quoting Patriotic Ugandan:

In a failed democracy, the individual becomes the institutions of state, and everything starting from state apparatus to state machinery work to fulfil the individuals whims.

The system is not broken, it was built that way. At least Amin made no allusions to any semblance of democracy, he was an outright dictator.

Only UNITED Ugandans will stop Museveni!

It's Ugandans to whom tribal lands that form Uganda belong, who elect these aliens to ensure Museveni is protected even from outside blames!

Are tribally divided powerless Uganans not already preparing to yet legalise & protect Museveni with next elections?
Report to administrator
0 #18 Akot 2021-10-28 13:24
Quoting kabayekka:

Indeed what would one expect of this NRM majority parliament...!

most of the citizens of this country have been telling the opposition members to boycott the national elections which are constantly not free and fair.

Those who were convinced to participate in such dodgy national elections did so in the hope that they will have the opportunity to be in the new government of Uganda.

What hope is there for the opposition if they cannot influence government business other than to pick up their monthly highly paid wages from the bank and go home and sleep.

As long as the tribalistic system stands, Museveni will rule with or without presidential election!

Why will Ugandans go for next parliamentary election to reelect/elect mps & ensure their huge pays for doing NOTHING for electorates?
Report to administrator
0 #19 Akot 2021-10-28 13:27
Zaitun, agreed, but,

Don't forget that as things are Museveni will die in post & leave the seat to his son!

Will this be change for Ugandans?
Report to administrator
12