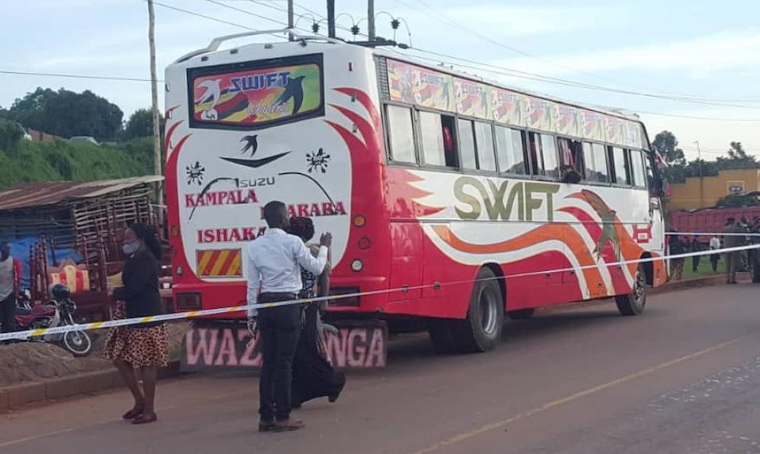 One person has been confirmed dead and another injured in another suspected bomb explosion in a Swift Bus at Lungala, Mpigi town council.

The incident involving a moving bus, registration number UAU 989T took place at around 5:20 pm. The bus was heading to Bushenyi. According to President Museveni "Preliminary reports say that the blast was from the seat and it killed only that person and injured the one who was sitting behind. The hunt continues, the clues are CLEAR and PLENTY."

Museveni added that the remaining 37 passengers and the driver are safe. Traffic police spokesperson Faridah Nampiima says that among the injured is Kityo Mwanga, the regional police commander (RPC) for Greater Bushenyi. She says that they are yet to establish what exploded.

"We need to investigate what exploded, we have secured the scene and investigations are ongoing," she said.

The explosion comes after last Saturday night's explosion at a small eatery Georon next to the famous Digida pork restaurant in Komamboga.

The explosion killed one person and left three injured. Earlier this month, the United Kingdom warned of possible terror attacks on Uganda but the Ugandan police dismissed off the warning.

4. Although he is now the president of Uganda: ask Hon Rebecca Kadaga, who can still deny that Gen Tibuhaburwa keeps reminding Ugandans about his "dangerous Guerilla tactics" (criminal tactics) to defeat his political adversaries?