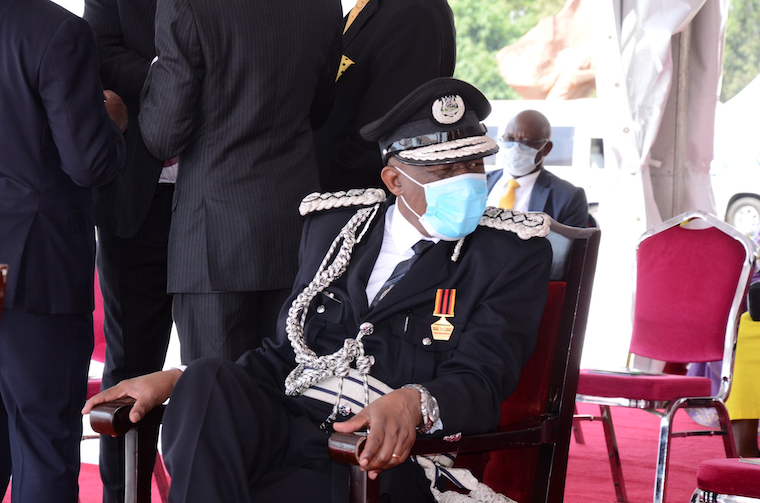 A 17-year-old senior two student has been arrested for allegedly announcing the Inspector General of Police Martins Okoth Ochola dead on Facebook.

Last month, stories made rounds on social media claiming that the police boss was critically ill and that he had been admitted in the intensive care unit following his long public absence. The police however dismissed the claims as being untrue.

Charles Twiine, the Criminal Investigations Directorate (CID) spokesperson said that on September 22, a post on Facebook by an account under the name Brison Olywl Oz declared that Ochola had “finally died” and that he should “rest in peace”, prompting investigations into the incident.

“Our investigators from the cyber unit working together with Uganda Communication Commission followed up the case and found that the Facebook account had been opened using a phone number, belonging to Fatumah Nakazibwe who was tracked and arrested," Twiine said.

He explained that upon interrogation, Nakazibwe denied having a Facebook account but said she was always giving her phone to her son identified as Mubarak Mubiru who was arrested.

Following Mubiru’s arrest and interrogation, he admitted owning the Facebook account but claimed he used the phone with three other colleagues who could be behind the post that announced the police chief dead.

Police then arrested Mubiru's colleagues as investigations into the incident continued. According to Twiine, Mubiru later confessed to having been behind the post.

“After investigations were completed, the inspector general of police as the complainant was informed but on realizing the person behind the offense was a 17-year-old, and considering that he is also a parent, he advised that he should be forgiven since he is still a minor," Twiine explained.

Twiine however noted that the case file has been forwarded to the director of public prosecutions (DPP) to ensure the charges of offensive communication slapped against this boy are formally dropped in accordance with the law.

“The withdrawal of these charges is only a monopoly of the director of public prosecutions, but the IGP has asked us to engage the parent to understand that it is not good to leave the phone to the children without knowing what they are doing with the phones. So many crimes are being committed using parents' phones without their knowledge," Twine stated.

Otherwise, at this rate; maybe the 1995 Constitution should be amended to make everyday Fools Day. In my opinion, it is petty to arrest a 17-year teenager for goofing around with fate Afande IGP Okoth Ochola.

In other words, dying is part of living: so, what is the big deal when e.g., someone like Wainainchi mischievously says that Lakwena is dead?

It would not change a thing because life and death will go on anyway, and the whole truth, nothing but the truth will prove itself anyway.
Report to administrator
-1 #2 MR 2021-10-19 08:30
If anyone asks why African is still backward please refer to were our so called leaders place priority use of our resources to go searching for who called them names or made such statements about them.

Didn't know the IGP had such thin skin. Well hope his proud that his harassing a boy young enough to be his grandson
Report to administrator
0 #3 Lakwena 2021-10-19 08:39
In the paradox of opposites e.g, the more death wish for bloody dictators like our own herein, the longer they live. Hence we keep asking ourselves why do good people die so soon (bad things happen to good people)?

In other words, if you want to live longer, be nasty, cruel and foul (Author and Master of Violence)! That's the secret and the way to go; e.g. Amin lived past 85 and Joseph Kony (JK) is still alive in the CAR

Else being soft, kind and generous attracts aggression and/or violence. As a result many: the Al Besigye, the Mumbere, Ssegirinya and Ssewanyana of this country have ended up in the Nalufenya and Kigo prisons of the world,