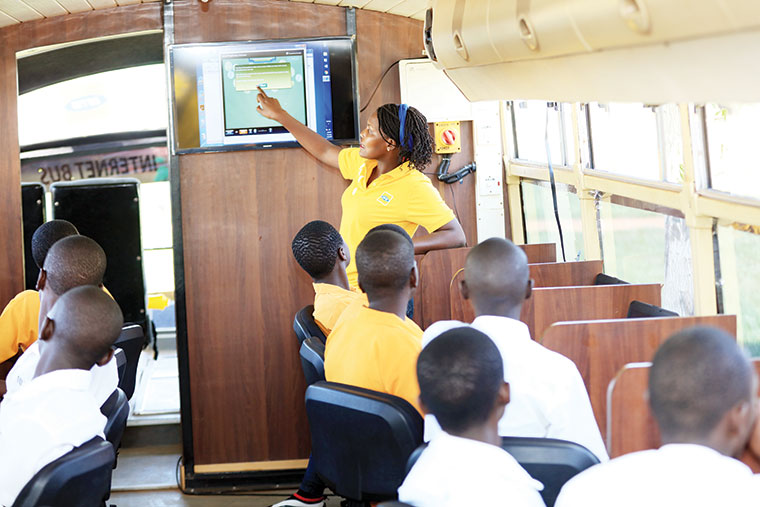 A teacher teaching from a moving bus

President Museveni and teachers under their umbrella body, Uganda National Teachers Union (UNATU) on Tuesday sharply disagreed over government’s plan to increase the remuneration of only science teachers, leaving out their arts counterparts.

Speaking at the National Teachers Day celebrations at Kololo ceremonial grounds, Filbert Baguma the UNATU general secretary noted that the idea of preferring science teachers is wrong and a sign of discrimination among the teachers and other government workers who are not scientists.

He argued that if the government insists on the payment of a basic salary of Shs 4 million for science teachers without giving any increment to the other teachers, it will put the resumption of teaching after lifting of the current Covid-19 lockdown in jeopardy.

“Without the grand plan for salary enhancement across all education subsectors, the resumption of the teaching-learning process according to the set school calendar could be in jeopardy. This plan should also put into consideration the provision of public standing orders concerning supervision and appraisal to clear any discrepancies between supervisors and supervisees,” said Baguma.

Baguma said that UNATU is not against the proposed increment, but wants all graduate teachers to benefit from the increment.

“The proposed increment should motivate as opposed to demotivating and dividing the teaching fraternity at this critical moment when we plan to reopen our schools representing different categories of teachers. We’re not opposed to the proposed salary increment the teachers are set to benefit, the union welcomes the proposal Shs 4 million as the starting salary for all graduate teachers…based on the principle of equity and fairness, all those with the same qualifications should ideally earn within the same salary scale. This is clearly stated in the National Teachers Policy as approved by cabinet,” said Baguma.

But Museveni warned the teachers against engaging in industrial action and putting him under ransom. In June 2021, Museveni while meeting doctors under their umbrella Uganda Medical Association (UMA) at the Entebbe State House, reiterated the government’s commitment to enhance salaries of medical practitioners and other scientists including teachers. The pledge was recently approved by the cabinet putting the starting science teachers' salary at Shs 4 million.

However, humanities and arts teachers weren’t happy with the selective increment. Baguma says that the increasing salaries of science teachers came at a time when the government has failed to honour its pledge to enhance all teachers’ salaries as agreed upon in the collective bargain agreement that had been signed in 2018.

Baguma further reminded the president about a pledge he made during the 2020 International Teachers’ Day celebrations when he promised to establish a salary review commission. Museveni said that the government will not backtrack on the decision to increase the salaries of science teachers since government was now focused on developing Uganda using a science-led development strategy and can't increase salaries for all due to limited resources.

“Therefore this resistance you’re launching against our long-held position is not correct, I would advise you to really calm down and stop obstructing our plan because it is well thought out.”

Museveni asked UNATU officials not to resist his efforts or put him under pressure after knowing that the government is prioritizing scientists first to encourage science and technological innovation.

“So please stop this argument. These arguments show that you don’t know what you’re talking about and of course, we shall not be influenced by that because we shall again miss the birth of history. Africa cannot do that mistake again. We’re already far behind, the other societies have gone through three industrial revolutions, they are now entering the fourth one, the one artificial intelligence and we’re trying to catch up - the first industrial revolution, the second one, third one and the fourth one. All these left Africa behind. So I'm surprised, this must be the mistake of the secretariate in the president’s office who don’t engage you and really all teachers should know this. I’m a person of literature and history but I’m the one who is leading the crusade of having science-oriented education, the others are there but emphasis must be given to science because that is what life hinges on for the last  4 and a half million years,” said Museveni.

+1 #1 Lakwena 2021-10-14 09:02
Although he is not anywhere close to a natural scientist, intoxicated by power and self-importance; what Our Dictator is doing (discrimination) is a primitive and deliberate educational sabotage by design.

In other words, an arbitrary, discriminatory financial disincentive is the worse demotivator in productivity, especially in the education sector. By the time the country wakes up to this fact (quasi education) , it will be a disaster that will be very costly to reverse.

The dictator must be reminded that the problem of Africa or remaining backward is not the lack of natural science; but dictators like him who do not want to leave power (our State House).

Wachireba?
Report to administrator
+2 #2 Abner 2021-10-14 11:24
Most of you will agree with me that the man has gone bazerk. And he's still using a wrong diagnosis to fix African problems.

This is surely absurd! This guy is very interesting in his modas operandi these days. There are things he's pursuing with passion, I don't know what he's been doing after all these years. It's as if he has just started working.
Report to administrator
+3 #3 Hamilton 2021-10-14 18:57
Dubai developments touched his mind.

He has not been using his jet properly over the years to traverse other countries and emulate developments there.He's just waking up now.
Report to administrator
+1 #4 kabayekka 2021-10-14 22:08
Indeed what this guerilla and African liberator is saying is that scientists like Besigye are at least better to work with than working with artists like Bobi Wine!
Report to administrator