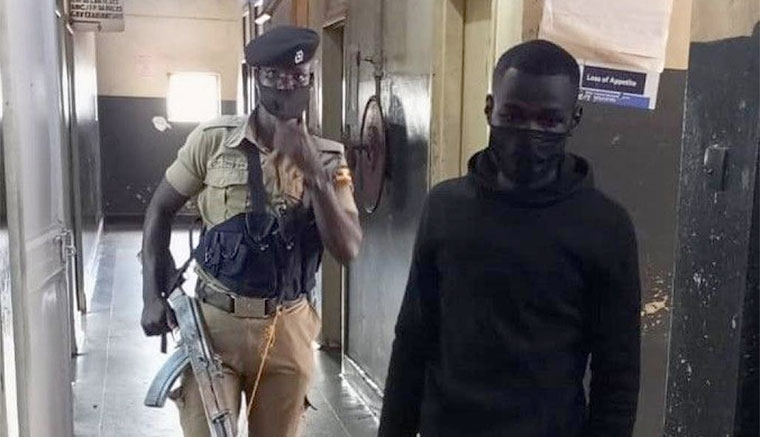 Joshua Bakubye, one of the suspects at CPS

Police in Kampala has arrested two people suspected to be part of a racket issuing fake COVID-19 test results to travellers.

Kampala Metropolitan deputy police spokesperson Luke Owoyesigyire identified the suspects as Francis Lule and Joshua Bakabuye,  both residents of Kawempe. Their arrest came after a woman who was travelling abroad, questioned how they were able to give her results without conducting a test.

The woman who had been asked to pay Shs 150,000 for the test, was alarmed that even without a test, she was given negative COVID-19 results on a headed paper of Meya clinic. But after she raised concerns about the authenticity of the results, Meya clinic staff noticed that her name was not recorded in their system on the said date.

This prompted the staff to inquire how she had got the results. She told them that someone who described himself as a Meya clinic staff approached her and promised to take her samples for testing at a cost of Shs 150,000.

“I paid and I waited for him to draw my samples but he did not. He instead brought me negative results. That is why I have come here to find out,” she reportedly said.

Luckily, the man who had picked money from the woman had left behind his telephone digits. In the aftermath, the clinic alerted police about a racket using its name to falsify COVID-19 results. Police asked the woman to call the culprit pretending that she had got someone who urgently needed results, leading to the arrest of Bakabuye who later implicated Lule as his boss.

“I am not the owner of the clinic. I am just a distributor of results. Arrest my boss. I just get a commission,” Bakabuye told police in his statement, before leading the police to Lule's residence.

Owoyesigyire said some exhibits that include headed papers of several clinics in Kampala have been confiscated. The books confiscated from Lule’s home show in the last few days, 20 people had been issued with results at a cost of Shs 150,000 each.

However, police have since learnt that many of the people who got the results have already flown out of the country. Police added that they sent a team to Entebbe airport with a copy of false results picked from the suspects’ homes and to their surprise, the systems read them as genuine.

People sitting at the helm have stolen most of the money meant for the covid response, and they even run these testing and quarantine sites.