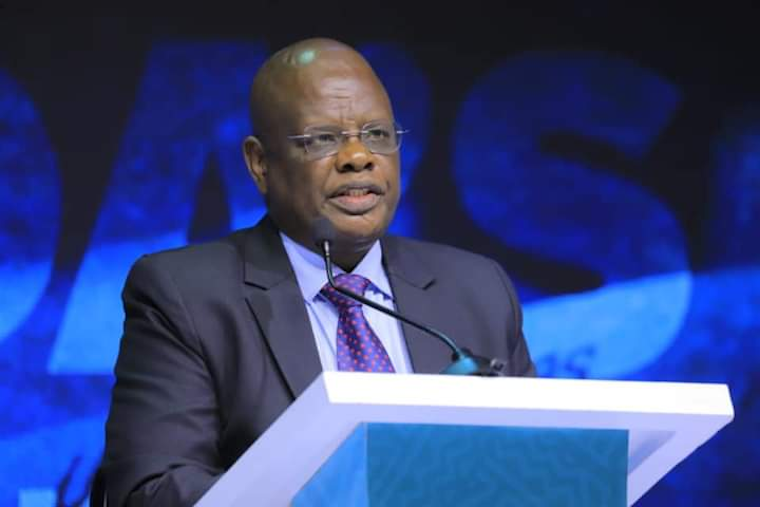 In his October 11, 2021 petition, Jabbe Pascal Osinde Osudo, the former director of human resource and administration at UCCA, says Bamwesigye was irregularly recruited as he didn’t meet the criteria in the advert. He contends that Bamwesigye lacks the integrity to run such a highly specialized agency with regulatory powers.

Osinde also claims that Bamwesigye’s academic documents contain several discrepancies. He also argues that based on his passport, Bamwesigye was above the 55-year age limit when he was appointed, which was a key recruitment requirement. In his evidence backing the petition, Osinde indicates that Bamwesigye has three dates of birth.

The petition shows that when it comes to academics, Bamwesigye claims that he was born on November 27, 1967, and in one of the results slips he tenders in the names of Fred Kanyogoga, he sat PLE in 1976, which indicates that he joined primary one when he was just a year old.

"In his official records and CV, he indicated that he sat PLE in 1978 as Fred Bamwesigye. He also goes ahead to list that he had sat UCE in 1981, two years after completion of PLE. From the various documents submitted by Fred Kanyogoga Bamwesigye, he possesses various dates of birth and several results for PLE, UCE and UACE", reads the petition.

Adding that “Honorable, having a fraudster of this nature in charge of such a sensitive sector is very risky as he will not live up to the values of air transport, which demands adherence to rules. Bamwesigye with all the irregularities about his age and academics also sits on the Board of National Social Security Fund.”

Osinde wants Cosase to investigate and save UCCA from Bamwesigye whom he describes as a fraudster and masquerader.

UCCA public affairs manager, Vianney Luggya told URN that whereas UCAA and the director general are contemplating legal action, the malicious claims should be ignored with the contempt they deserve.

He said that the acting inspector general of government (IGG) and the court investigated the matter in April 2021 and dropped it.

“In April 2021, a recycled anonymous whistleblower report was again sent to the Inspectorate of Government over the same claims and in a media interview, the then acting IGG noted that the claims were first presented to the IGG in 2017, comprehensively investigated and found to be untrue. The matter was recycled four times and sent to the same office with the same content," said Luggya.

Adding, “The matter has also been to court through civil suit number 110 of 2021, and court resolved the matter through a ruling that exonerated Bamwesigye on April 9, 2021. He erroneously recorded conflicting dates in his early school days, which was carried on in the first years of employment.”

He explained that upon confirmation of the right date of birth, following recovery of authentic documentation, including a baptism card, the right date was formally regularized through a September 2007 statutory declaration way long before contemplating that he would in future vie for the position of Director General of UCAA.

“In 2007, Bamwesigye had not even joined the authority. The records being discussed on social media are from a passport that was obtained sometime back before confirmation of the exact date of birth as indicated above. In their investigations, the Inspectorate of Government noted as much, and so did court, before making a ruling on the matter.”

In 2020, the then state minister for Works and Transport, Joy Kabatsi suspended Osinde from his position as the director of human resource and administration on allegations of backbiting and infighting that prejudiced the good image of the organization and affected productivity.

However, on July 15 2021, High court judge Musa Ssekaana ruled that the decision by Kabatsi to send Osinde on forced leave was unlawful. He, however, did not make orders reinstating Osinde on his job at the authority on grounds that his employment had been terminated in other court proceedings.

Remember Museveni and the bishop, they found Museveni’s other date of birth at one point!
Report to administrator
+2 #2 kabayekka 2021-10-13 10:12
For a parliament and a public service that is so determined to build up a republican dynasty in this country, the prospect of winning such cases in the public domain is very limited indeed.

What of the immense corruption that this government has agreed that it is prevalent in the public service?

That is why it is very much advisable to the public not to waste much time in trying to get justice in this country.

Like the poor man Osinde, if you shout out for justice to be done you end up loosing your job as an inefficient African administrator with a very big mouth!
Report to administrator
+1 #3 rubangakene 2021-10-14 01:53
Uganda must not appoint a person with "dubious credentials" in this important position. UCAA represents ICAO in Uganda, a UN body for tasked with aviation safety, security, efficiency and environmental protection besides being the regulating body for operating practices and procedures.

Really, you can't just pick someone "off the street" and install him in this chair. There are many other qualified Ugandans who should compete for this job. RE- ADVERTISE THE JOB!
Report to administrator
+1 #4 Lakwena 2021-10-14 14:29
In other words, 36 years of sowing the seeds of mediocrity and incompetency per excellence. By hook or crook; this is what tribalism, nepotism, cronyism, favoritism or is it, Westernerism is doing to this country:

Otherwise, lying or dishonesty is not as easy as some psychopaths think. It dehumanizes because, there are logical consequences.

The good or bad news is: one day the practitioners end up being caught pants down/red handed and humiliated into hell. The earlier one realizes the vice, the better: so stop it before it devours you.


E.g., it has fast caught up with our dictator Gen Tibuhaburwa, who vehemently condemns tribalism during daytime but religiously practices it at night. As a result now-a-days, only idiots and opportunists listen to him.