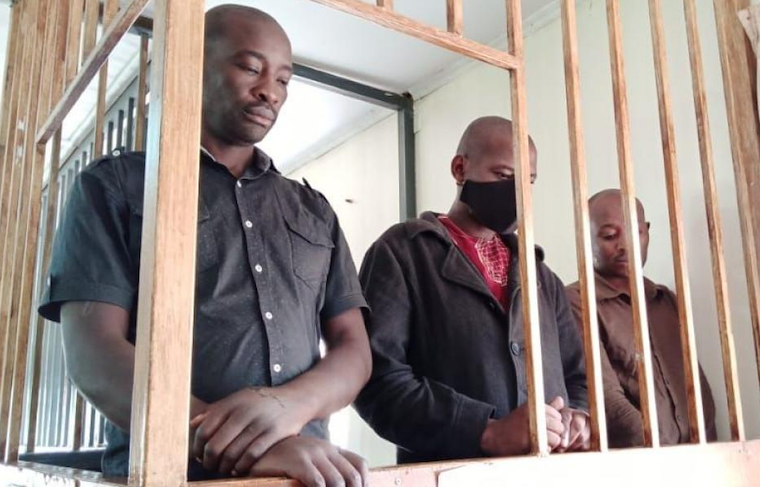 The suspects in the dock

The trio, yesterday Monday appeared before the Army court chaired by Lt Gen Andrew Gutti who charged them with kidnap, murder, aggravated robbery, and unlawful possession of ammunition.

Court heard that the accused, together with others still at large while in Fort Portal Tourism City at around 4 pm on September 2, 2021, kidnapped Kabagambe with intentions of murdering him. Kabagambe who was last seen at one of the bank ATMs in Fort Portal was found dead two days later in a swamp in Ibanda district.

According to the prosecution, the suspects also robbed Kabagambe of Shs 400,000 either before or after murdering him. The suspects pleaded not guilty to the charges. As a result, prosecution led by Maj Emmy Ekyaruhanga and Capt Ambroz Guma told the court that the inquiries into the matter were still ongoing and asked court to remand the accused persons up to November 1, 2021. Gen Gutti accordingly remanded the suspects to Kitalya prison.

Prior to his elevation to the position of Ntoroko district NRM chairperson, Kabagambe served as the district publicity secretary. He replaced Vincent Mugume, who was also killed in November 2019 together with a motorcyclist he was travelling with to Kandito village in Karugutu town council in Ntoroko district.

According to court records, Mutamba, one of the suspects before the court has a past criminal record. Mbarara High court convicted him on October 18, 2013 for aggravated robbery after finding him guilty of robbing Kalist Nuwasasira of Shs 1.2 million and other items such as airtime cards for the then Zain [now Airtel], Orange and MTN mobile shops, a laptop, two Samsung mobile phones all valued at Shs 15 million on December 15, 2009.

The records further show that Mutamba used a gun to commit the robbery, which occurred in Kakoba Central cell in Mbarara district.