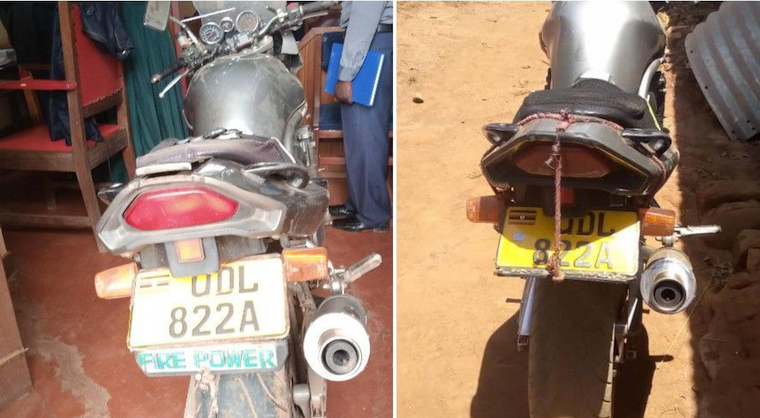 The bike exhibit before and after being presented before court

Nantaba was testifying in court in the case where the state accuses police officer, corporal David Ssali of shooting a handcuffed Ssebulime in March 2019.

Nantaba, who, today appeared as a state witness for cross-examination conducted by Mukono regional state attorney Aisha Naluze at Mukono High court, said she couldn't confirm whether the motorcycle presented as the exhibit is the exact bike that was used by the late Ssebulime to trail her.

According to Nantaba, the bike presented was repaired and appeared newer in shape - with the bike’s backlight seemingly replaced with a new one and the number plate that had been tied with a rope probably removed in the process of making repairs.

She, therefore, requested the state to make a comparison of the current appearance of the bike with the old pictures captured by investigating officers at the Crime Investigations Division (CID) headquarters.

Naluze, the state attorney has requested court to give the prosecution more time to look into the matter of the evidence presented. Justice Henry Kaweesa adjourned the case to tomorrow Tuesday at 9 am for further hearing.

Corporal Ssali, attached to Kasangati police station was charged and remanded to Luzira prison after the crime and a ballistic report confirmed that the killer gun actually belonged to him.

+1 #1 WADADA rogers 2021-10-12 08:58
if it is the Uganda Police playing about with evidence, then we are safe declaring that Ssebulime died in vain, no one will be found guilty of his murder
Quote | Report to administrator
Refresh comments list
RSS feed for comments to this post
Add comment