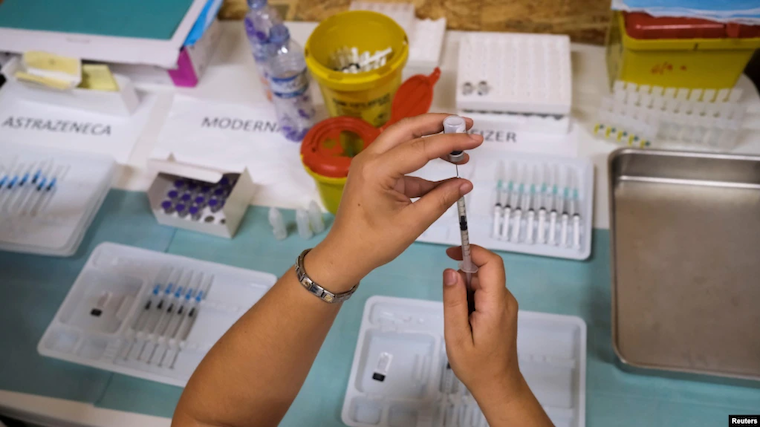 A new study reveals the two-dose COVID-19 vaccine developed by Pfizer and BioNTech is 90 per cent effective at keeping someone from being hospitalized from the virus up to six months after receiving the second dose.

Researchers from Pfizer and US-based health care consortium Kaiser Permanente observed the records of about 3.4 million people who were members of Kaiser’s Southern California health insurer and provider program between December 2020 and August of this year.

The study, published Monday in The Lancet medical journal, also revealed the vaccine was 93 per cent effective against the highly contagious Delta variant for at least six months after the second shot.

But the researchers also found that the vaccine’s effectiveness against infection dropped from 88% one month after completing the regimen to 47 per cent after six months.

The new study was published on the same day the European Union’s drug regulator approved the use of booster shots of the Pfizer-BioNTech COVID-19 vaccine for those aged 18 years and older, but left it to individual countries to decide whether or not to recommend the shots for widespread use.

The European Medicines Agency said in a statement that a booster dose of the Pfizer vaccine “may be considered at least 6 months after the second dose for people aged 18 years and older.”

The agency said people with a severely weakened immune system should be given a third dose of the Pfizer or Moderna vaccine at least 28 days after they have received their second shot.

The guidance comes as some EU member states have already begun administering booster shots, while others are still debating how broadly to use boosters in their populations.

And again when the effectiveness of the booster is ended. Does it mean that the human body is unable to build up its body resistance to this virus?

That is why more medical research must be done to try and discover the natural herbs that can be put into the therapy formula of successfully treating the sick patients of COVID19.

That would be a better way of trying to live with this pandemic other than using international lockdowns which some dictators are using for their political ambitions!
Quote | Report to administrator
Refresh comments list
RSS feed for comments to this post
Add comment