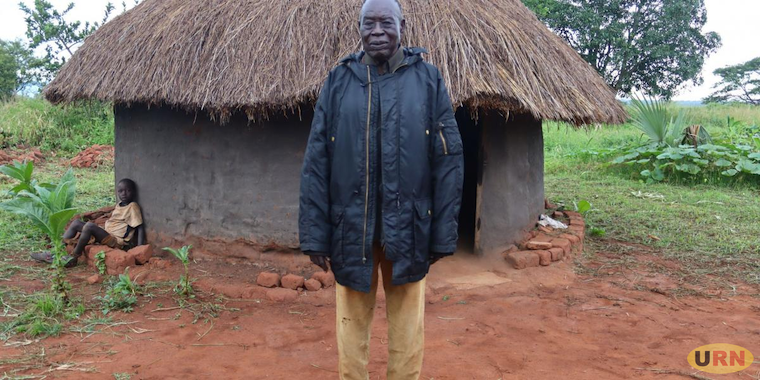 Here, for the past 20 years, Okello has been living a quiet life away from the public eye with his family after his retirement from the army in 2001. Little, if not any is known about Okello’s service to the army and the country in general.

But a conversation with this reporter on Thursday evening at his home as the country geared to celebrate the 59th independence anniversary on Saturday brought out a startling claim by the 89-year-old. Uganda on Saturday celebrated the day its flag was first hoisted 59 years ago to mark its birth at Kololo Independence Grounds in Kampala.

The country's independence history throughout the years pointed to one man, Maj (Rtd) Kanuti Akorimo (deceased) described as a national hero for a historic performance of raising the Ugandan National flag on October 9 1962 as the British Union Jack was lowered, ending a 70-year British occupation of Uganda.

Akorimo died in April last year aged 89 at Atutur hospital in Kumi district from respiratory pneumonia. He had received a hero's medal in 2003 from the government in recognition of his historic performance.

But Okello disputes Akorimo’s recognition, saying there was no such person at the time of hoisting the national flag on independence day. He claims he is the legitimate person who performed the function of raising the Uganda national flag high for the first time on 9th October 1962.

That Okello is now the fourth man to claim having hoisted Uganda's flag, it is not clear why the government has not made an authoritative forensic analysis to state positively who the man photographed performing the function was.

Okello who had served in the King’s African Riffle-KAR (a British colonial regimental) since 1953 when he joined on February 5, recalls that a week before the colourful independence celebration in Kololo, information was passed through the then Defence minister to the former first Ugandan army commander Brig Shaban Opolot to identify a soldier at the rank of a sergeant, who is smart, disciplined, and intelligent who would raise the Uganda national flag on Independence day.

Then a sergeant stationed at the 1st Battalion in Jinja, Okello says he possessed all the qualities needed and was thus selected. He notes that he was also later trained on how to hoist and lower the national flag and on the midnight of 9th October 1962, he hoisted the Uganda national flag high amidst cheers and ululation from thousands of Ugandans after a British Sgt Maj Sydney Small lowered the Union Jack.

“…information was passed to the Defense minister who ordered the army commander to select a sergeant who is disciplined to hoist the flag. They went and sat down and selected that it would be Terensio Okello, I was selected to hold the flag, I was taught how to hoist it and lower it, that’s how I became the holder of the Uganda national flag and on the independence day, when the British flag was lowered, that’s how I hoisted the Ugandan national flag.” Okello says.

Adding that he felt great joy for having been selected and trusted with the noble responsibility of hoisting the national flag for the first time.

“…I never felt anything bad on that day, I was just happy for being selected to hoist the flag, it meant I was trusted and I was very happy.”

According to Okello, he carried the original national flag at every national event around the country from independence day until 1963 when he was promoted to the rank of sergeant major before being relieved.

He claimed he hadn’t known that the government had also mistakenly been recognizing Maj (Rtd) Kanuti as the one who hoisted the Uganda national flag reiterating that he was the legitimate hoister of the national flag.

"...There was no one called Kanuti at a rank of a sergeant, I carried the national flag at all times until a new sergeant was replaced for the duty when I got promoted to a sergeant major. That responsibility wasn’t shared, the person who held the flag was the one responsible for carrying it, no one called Kanuti from Teso held the flag,” said Okello.

Asked why he has been quiet all along and did not come out to claim his credit for the national function, Okello says he hadn’t known that what he did attracted national attention. He however notes that it should have been the discretion of the government to check on the national archive for the person who performed the function of raising the national flag.

“I’m not in any way fighting for recognition from the government or asking for attention in terms of gifts, I'm a soldier who waits for the government to give instruction or recognize what someone has done,” he said on Thursday.

His 65-year-old son Michael Okumu, however, says his father has been silent following his incarceration for 11 years at Makindye military barracks from 1989 to 2001 along with several top army officers at the time.

Okello had reportedly been accused of attempting to overthrow the National Resistance Army (NRA) government led by Yoweri Kaguta Museveni after the fall of the late Tito Okello Lutwa’s government in January 1986. Okumu says his father, ever since his release from military detention in Makindye has been quiet and never wished to discuss his army roles for fear of repercussions.

“He never wanted to disclose his past because of what he went through while in detention, it’s the reason perhaps why he kept quiet,” Okumu says.

He believes his father rightly hoisted the national flag since he has quietly been speaking about it at home. But the Fourth Infantry Division spokesperson Lt Hassan Kato told URN in an interview that it’s hard to now believe who exactly carried the Uganda national flag high on independence day since more than four people have claimed the same.

He says at least two other people from Lira and Bombo have claimed the same - making it impossible to understand the history. Efforts to get comments from Uganda People’s Defence Forces spokesperson Brig Flavia Byekwaso were futile by press time.

Much of Okello’s military career evidence are not available after his properties were reportedly set ablaze when the Lord’s Resistance Army (LRA) rebels raided his home in the early 2000's.

Okello trained in Israel as a company commander in 1973 and as a battalion commander in Ghana in 1975. In 1984, he says he trained as a brigade commander in Tabora Tanzania.

The bigger issue at stake at present is; who "pulled down" that flag so that we ended up in this mess of a "sinking" country?
Quote | Report to administrator
0 #2 WADADA rogers 2021-10-11 23:53
Does it matter who raised the flag, there are no medals for that role. whoever did it was only doing his work for which he was receiving a salary from government
Quote | Report to administrator
0 #3 Akot 2021-10-12 14:32
rubangakene, thanks.

The most important issue for Ugandans now is; why wait for Museveni to die in post & leave it to his son & what difference will that be for what future for Ugandans?

As it is, at +90 years, Museveni will still be in post & his son waiting!
Quote | Report to administrator
0 #4 Akot 2021-10-12 14:48
With the picture above, do we still wonder why Africans are dying to live in the countries of their former colonizers?

Once Africans impose themselves on countries of their former colonizers, they demand their right to; housing, healthcare...& fight back if told to go back to Africa saying there is NOTHING for them there, not even clean water!

Is Museveni a savior/chance for Ugandans while British were terrorists who ensured schools/hospitals were built?

Which African FREE country ruler has given his people chance to UNITY for common purposes to ensure good governance & change as & when the people ask for, even through elections?

Where was Museveni when Dr Obote & Sir E. Mutesa ll ensured UNITY for peaceful transfer of power from UK?

What are Ugandans peaceful slaves terrorised by conqueror Museveni, yet celebrate Independence from UK?
Quote | Report to administrator
Refresh comments list
RSS feed for comments to this post
Add comment