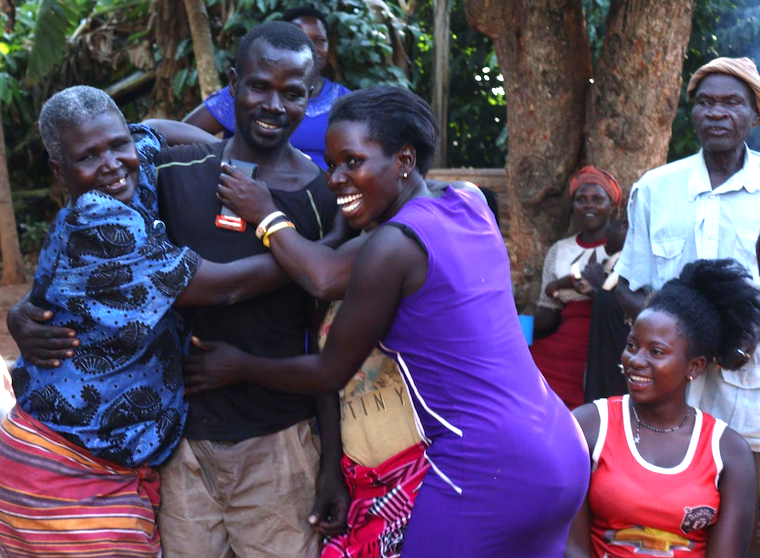 There is excitement and confusion in the family of Christopher Kazirya and Gertrude Kazirya after the resurfacing of their son, Bernard Wajja Nsamba they thought they had buried 4 days ago.

On Tuesday this week when the Kaziryas received the terrible (now false) news that their son Nsamba had been killed in a street fight on Monday.

The family mobilized Shs 3 million and picked the purported body of their son from Kyamatyansi village in Nakaseke district where he was working on a farm and laid him to rest at their ancestral in Nalongo village in Luwero distirct. Nsamba's mother, Gertrude says that the deceased's body they buried was badly disfigured, making it difficult to recognize his face.

She says that they relied on the family aunt who falsely identified the body as that of Nsamba. Kazirya, however, says that as they were healing from the shock of burying their 'son', his brother, Godfrey Kawalya received a phone call on Friday indicating that they had buried the wrong person.

According to Kazirya, they initially thought it was a group of conmen playing on their minds, but once they put their son on the phone, they easily recognized his voice. She says that they immediately asked Nsamba to return home because they had buried someone thinking that it was him.

Nsamba’s father, couldn’t hide his tears of joy when he saw his son alive. He hugged him and welcomed him home. Kazirya says that he is now waiting for police to identify the body of the man they buried before he allows them to exhume the grave.

Nsamba told URN that he was equally shocked to get news that he was pronounced dead and buried. He, however, confirms that he was in a bar in Kyamatyansi trading center with his auntie Nakiganda the day the unidentified man was killed but they left and returned to the farm safely.

He delivered Nsamba to his home around 5 pm on Friday. Thereafter Relatives and residents gathered at Kazirya’s home to catch a glimpse of Nsamba, whose purported funeral they had attended.

Richard Luwondera, the LC 1 chairman of Nalongo village said that they were yet to establish the identity of the person they buried. Isah Ssemwogerere, the Savannah Regional police spokesperson said that he was still waiting for police in Nakaseke to brief him on the incident.

Ugandans MUST join to today world & this, by just UNITING to end Museveni's evil rule, thenput in the governance they want!

Why is Museveni assured of lifetime rule & his son will take the dade's post, when Ugandans are in dire state, with no chance of a better tomorrow?

Why don't Ugandans believe in themselves & their usefullness to themselves in the country formed by their tribal lands?

Why are Ugandans alright with Museveni's son taking the dad's post, thus continuity of their enslavement, poverty, isolation from the rest of the world?
Quote | Report to administrator
-1 #2 Akot 2021-10-09 19:41
Written by URN,

French president woke up & is holding Afrique/France summit without Africa useless rulers, but with just young Africans & has put on table 30 million euros to support real 'democracy' in the African countries concerned!

Why are Ugandans not aware that as long as they go along with the tribalistic system, no developed country will ever blame Museveni & non will EVER help them?

A different future is waiting for Ugandans, but they are the only ones to ensure that future by FIRST dismentling the tribalistic system, then their UNITY will show Museveni/family way out!

Then Ugandans MUST form the kind of governance they want immediately to make their stand with the outside world!

Why are tribal leaders still in posts & subjects/Ugandans just go along, knowing they are along with chief tribal leader Museveni?
Quote | Report to administrator
0 #3 Lakwena 2021-10-11 12:03
What an interesting Drama!

In other words, whether it is a tragedy or a comedy or both; it only happens in Africa!
Quote | Report to administrator
Refresh comments list
RSS feed for comments to this post
Add comment