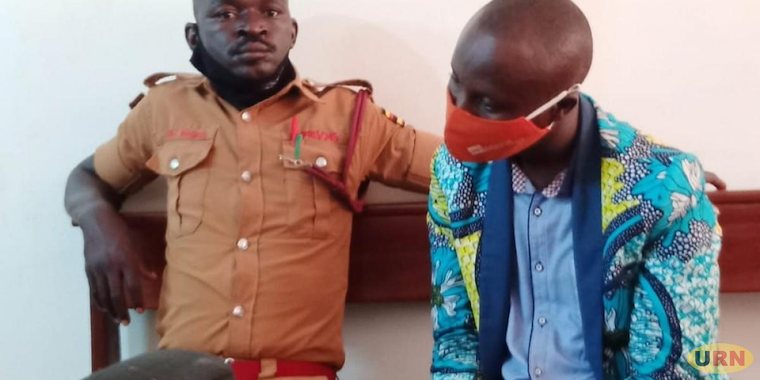 Didas Mpagi, the youth pastor and former headteacher of Real Infant primary school in Wakiso district has been sentenced to life in prison after being found guilty of sodomizing six boys in his school.

He was convicted by justice David Wangututsi of the International Crimes Division, who found him guilty of six counts of aggravated defilement and trafficking children. Court heard that between 2016 and 2019, Mpagi, performed unnatural sexual acts on six boys aged between 10 and 16.

According to the prosecution, the victims were enrolled on scholarship and Mpagi ensured that they were all in the boarding section. Mpagi would then require his victims to sleep naked with him in the same dormitory and one after the other where he would ask them whether they knew how to kiss and then offer to teach them practically how it's done.

He reportedly threatened to kill his victims using witchcraft from neighbouring Tanzania if they opened up to any person about his acts. According to the evidence presented in the court, Mpagi would deny some of his victims food or reduce their portions and with threats of expulsion if they didn’t satisfy his sexual desires.

Prosecution led by Joseph Kyomuhendo presented 12 witnesses including the six victims, cooks and a matron, Aisha Nabosa of the school who had briefly interacted with some of the victims and saw the pain they were going through at the hands of Mpagi.

In his defence, Mpagi claimed that Nabosa has never worked at the school in question and that one of the boys who pinned him has never studied at Real Infant primary school. He also claimed that he was happily married and couldn’t commit the crimes he was being accused of.

While delivering his judgement, justice Wangututsi rejected Mpagi’s defence, saying it was full of blatant lies because the evidence tendered in court showed that upon his arrest, he led police to the dormitory from where he would abuse the boys. Police recovered an ATM card in his name, a national ID card and the sex lubricants he would use to abuse the minors.

Wangututsi who delivered the verdict having clocked the mandatory retirement age of 65, said that police also recovered blood-stained grey bed sheets. He explained that the blood found on the bedsheets matched that of Mpagi and one of the victims once subjected to forensic examination.

Justice Wangututsi, who made several emotional pauses while reading his judgment described Mpagi’s actions as lascivious, a form of sexual exploitation. The state lawyer Kyomuhendo asked the court to sentence to hand Mpagi the maximum death sentence, saying that he doesn’t deserve to be anywhere in society.

He told the court that shortly after concluding the submission of evidence in the case, he received complaints from Kigo prison indicating that Mpagi had already started sexually abusing other inmates. He told the court that a prison warder would inform the court about the matter later. However, justice Wangututsi didn’t allow the presentation, saying this was a new matter.

Kyomuhendo who made his submission with great emotion said that Mpagi meticulously premeditated the crimes and executed it with impunity as he enjoyed ravaging the private parts of his innocent and vulnerable victims at a tender age.

On his part, Mpagi asked for a lenient sentence, saying that the two and a half years he has spent in jail have reformed him. He revealed that he has since started teaching literacy and lessons to other inmates.

He also told the court that he is a family man who wants to look after his children and he has no other criminal record. In his judgement, Wangututsi said that Mpagi caused trauma to the children and if people’s sons are to be safe he should spend the remaining part of his natural life in jail. Mpagi cried uncontrollably as prison warders matched him out of the court to start serving his sentence.

Animals would do such evil acts on anothers,but humans perfoem evil acts all over; villages, schools, those who want chance to be singers/comedians/swimmers...are sexually tortured, priests abuse their position & rape church goers!

Ah! Useless ruelrs have wives/mistresses while ensuring populations are starved, unhoused, have no water, no means to just live!

Why are humans so so evil with one another?
Quote | Report to administrator
0 #2 Apollo 2021-10-09 20:01
Unlike Mpagi, there are those who are protected by powerful institutions and political connections.

These lascivious characters apply what one Psychologist called "idiosyncrasy credit" to survive.

They do a lot of good acts which in the process helps to consolidate their political connections which they leverage once they get in trouble.

These low-lives may survive on their political connections but there will be judgment beyond human reach, and what a day of infamy it will be.
Quote | Report to administrator
0 #3 Lakwena 2021-10-12 10:30
It is as if Mpagi didn't know that crime and punishment are bedfellows.

In other words, the high and low profile criminals must be reminded that: while they maybe getting away with crimes against humanity (corruption, violence, pedophile, human trafficking [slave trade] state organized murder, malicious prosecution, etc);

inevitably Punishment is slowly but surely catching up with you.
Quote | Report to administrator
Refresh comments list
RSS feed for comments to this post
Add comment