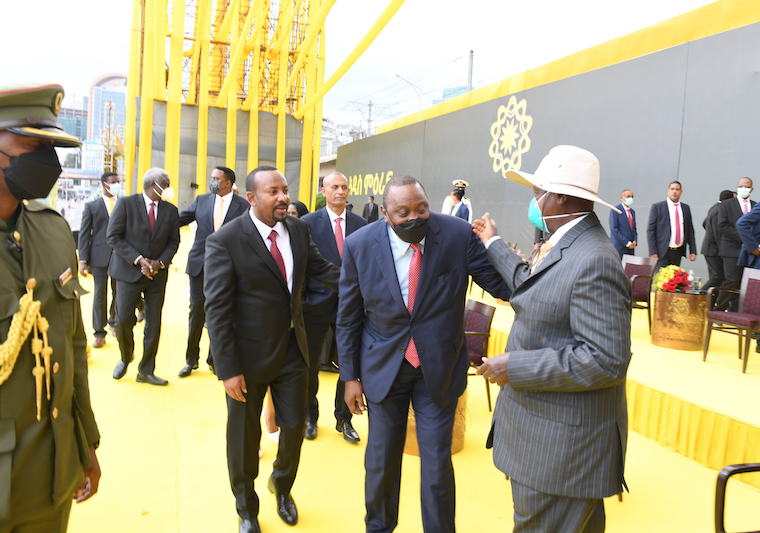 Uganda President Yoweri Kaguta Museveni has urged African leaders and their people to do away with politics of identity.

Speaking recently during the swearing-in ceremony of the Ethiopia’s Prime Minister Abiy Ahamed in Addis Ababa,  Museveni emphasized that politics based on tribes and religions is never productive as it consequently resulted into failed states in post-independence Africa.

“As an observer of African politics for over 60 years, I’ve observed that politics based on religion and tribes has caused many problems to African countries including Uganda. Uganda just came up after we had shunned politics of identity and substituted it with politics of interest.” Museveni remarked.

Museveni commended Ethiopians for conducting credible and democratic elections. He congratulated Abiy upon his new five-year term of service to his country.

The Ethiopian Prime Minister who had earlier in the morning taken an oath of office, promised in his remarks to work hard and bring total peace in Ethiopia especially by putting a stop to the war in the Tigray region, which has costed Ethiopia a “heavy price.” He pledged to work with patriotic Ethiopians to bring about peace and prosperity in the country.

The swearing-in ceremony was also honored by the attendance of the Nigerian president, Senegal, Kenya, Somalia, Djibouti, South Sudan and delegations from other African countries as well as representatives from the international community.

+2 #1 kabayekka 2021-10-09 14:35
"As an observer of African politics for over 60 years, I’ve observed that politics based on religion and tribes has caused many problems to African countries including Uganda."

Is this African gentleman now lecturing to his good friends and African students, to ban religion and tribalism in their relative African countries so that they can then have the opportunity like he has managed to get, to govern their countries for over 40 years?

One hopes he has given them his well written text books!
Report to administrator
+3 #2 Zaitun 2021-10-09 16:17
What a liar!
What is this man who speaks the truth through his teeth and nostrils telling African leaders?

Since when have you practiced what you are preaching?

You are the president of the Uganda; your wife the Minister of Eduacation; your son a minister; whereas your relatives are holding juicy ministerial posts.

How dare you give a lesson to other leaders about something you do not practice in your own country!

Have you no shame to pretend to be a good teacher when your countrymates no longer believe in what you preach?

Old age is a terrible disease to our leaders who have lost memory of all the evils they have inflicted on people and the sufferings they have caused in their own homes and other countries!

What a blunder to advise those African leaders about something you have squarely failed to practice in your own country after all these three decades of presidency.

2. He has filled up the top Ministry of Internal Affair Executive with his tribal Top Bass Generals.

3. This is the same thug who appointed his Egyptian son as the Commander of the UPDF Land Forces.
Report to administrator
+1 #4 Lakwena 2021-10-11 11:08
4. This the same bloody parasite (kawukumi) who during his 1986, maiden speech at the UN General Assembly (Summit); lambasted and embarrassed fellow African Heads of States for traveling to the occasion using Private Jets, yet they left behind bare-feet countrymen, women and children languishing in absolute poverty.

5. this the same bloody leech who in 1987 told the OAU (AU) Summit that:" the problem Africa is leaders refusing to leave power?

In other words what an idiot; who in 36 years and counting has personalized Uganda. He is so shameless that: he does not realized that he is the only naked and bloody political leper of continent, masquerading as the Model and Great Leader.

Wachireba?
Report to administrator
+1 #5 Lakwena 2021-10-11 11:37
Like a ridiculous elder who quarrels and fights with his grandchildren over monkey banana; Gen. Tibuhaburwa he is so shameless: He does not realize that he is the odd man out, the oldest and grumpy Dictator, attending the swearing in of the Ethiopian PM who is his son's age.

In other words, we have a Savage Tribesman lecturing others to desist from politics of tribalism.

Who is a tribesman?

1. Is someone/people whose center of gravity (ideology) is his/their tribe/tribalism.

2. Is someone/people who is driven by extreme (myopic) tribal group and/or herd consciousness (false- superiority consciousness).
Report to administrator
+1 #6 Lakwena 2021-10-11 11:41
3. A tribalist will only agree with you and/or trust you if you belong to his tribe.

4. A primitive tribalist like Bloody Gen Tibuhaburwa alienates from the economy and political power (Center of power) whoever does not belong to his tribe/clan.

In other words, seeing is believing! Which is why since 1986 (appointments), all the bacon (big cash economy, education, privileges and power) go to the West (waruge Mbarara).