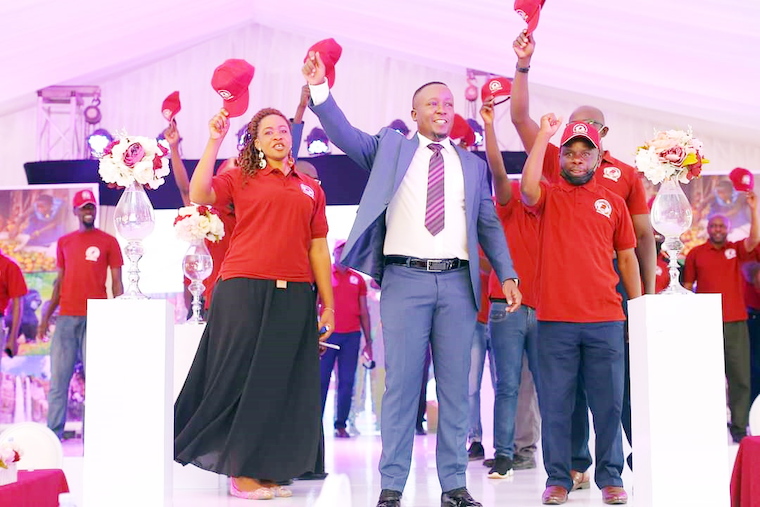 Joseph Kabuleta (C) with members of the NEED steering committee

On August 28, a group of political actors comprising mostly those who unsuccessfully contested in the recent general elections launched a national platform to foment an ideology to guide the next political dispensation.

Dubbed the National Economic Empowerment Dialogue (NEED), the loose body of politicians who currently hold no office, has divided country into 17 sub-regions with the mandate to influence and change the political narrative.

As DERRICK KIYONGA writes after interviewing its leader Joseph Kabuleta, also a former presidential candidate, the new political discourse has a lot of doubters to disprove.

According to Kabuleta, the need for an ideology to guide the politics of the next dispensation is influenced by politics from the past decades that has been about personalities rather than creed.

“In the early years of the NRM administration, when political party activity was banned, President Museveni accused parties of being built on religion and tribe rather than ideology. When the Movement morphed into a political party, it turned out to be even more ideologically bankrupt than the old parties he had demonized,” he says.

“Consequently, politics through these decades has been about NRM (which is all about keeping Museveni in power) and opposition, which is all about removing him from power, and builds its base on Museveni fatigue and the desire for change. But we want to shape a dominant ideology around which all Ugandans can coalesce.”

On the surface, this is refreshing but then again, the composition and structure of NEED suggests that in may morph into a future political party. In fact, some of the members present could not rule this out because normally, all political parties start with forming an ideological pressure group. However, Kabuleta insists NEED is exactly what it says it is; a platform for all political actors who stood for office and fell short to come and express their ideas rather than keep them in limbo for five years.

Meanwhile, from the look of things, NEED seems to have already stretched itself by trying to be represented countrywide. And, this is where the element of funding comes into play. To this, Kabuleta insists they are starting a conversation, and so they anticipate no operational costs.

“The members of the NEED steering committee who came from far and wide to attend our launch will go and preach the economic empowerment gospel in their respective sub-regions. So, we have a group of volunteers who are passionate about the politics of development hitting the road running. There’s no need for funding, but there’s a need for this kind of gospel,” Kabuleta said.

On the other hand, it is quite unclear what special aspect this discourse will provide that has never been brought out during the campaigns. After all, Kabuleta’s campaign slogan of Financial Liberation during the presidential elections is not too dissimilar to economic empowerment.

On this, Kabuleta reasons that these are subjects that cannot be exhausted through one campaign trail because, according to him, the disempowerment has happened over a whole generation.

“Throughout the country, hardworking people took on all manner of economic ventures but all of them ran into stumbling blocks set up by President Museveni’s jaundiced government which has worked extra hours to keep peasants in their peasantry because in that state they are easily manipulated at election times,” he said.

“Many of them had given up and settled for a life of mere existence. But NEED is going to awaken their hope, their desire, their fire and their determination to lift themselves out of poverty.”

But this also begs the question why Kabuleta and company are mostly focusing on economic empowerment at the expense of mindset change.

“Economic empowerment is a mindset. An ideology which seeks to make the citizenry financially independent. Economic disempowerment is an ideology too, associated with socialism and communism, which seeks to make the people dependent on the government. It is the ideology of choice for leaders like President Museveni because financially empowered people often have strong political opinions and are often the bedrock of change of government,” he said.

“So, it’s clear that President Museveni’s life presidency project had to involve depleting Ugandans; first, of their wealth, and secondly consequently of their will to fight his misrule. If he had allowed rural wealth to thrive like it used to before he took power, when villagers’ pockets were well oiled with money from coffee, cotton, tea and all that, he wouldn’t still be in power.

If he had allowed for the vibrant student leadership that thrived before him to continue, when universities and tertiary institutions were bristling with politically enlightened students sentient in national issues, he wouldn’t still be in power. So, his life presidency necessitated the death of every single order and institution. And so in many ways, President Museveni’s dream is Uganda’s nightmare. What a sad turn of events!”

NEED at a glance

Kabuleta insists that it was a guided decision taken by the NEED steering committee to create the 17 sub-regions. “Of course there are 15 sub-regions that existed pre-independence. And we retained those. However, because of its sheer size and population, we chose to divide Buganda into three for the purpose of economic empowerment,” he said.

“That’s because the dialogue in rural Buganda, say like Rakai, is different from the kind of conversation you would expect from urban Buganda, like Kampala, Wakiso and Mukono. So, we divided Buganda into North (Luweero side), South (Masaka and further) then Kampala Metropolitan which covers the aforementioned urban places.”

However, it remains critical how NEED will accommodate rival politicians in the dialogue.

“Is it possible to have meaningful dialogue with people who have identical ideas? No! So, rivals are welcome, to talk. Elections are still far away; so, they can resume their rivalry as we draw closer. But for now, we believe that they all agree on the central theme of economic empowerment. All differences on how to achieve it are both welcome and encouraged,” he said.

Regarding the criterion of joining NEED and how its will gauge the level of influence, Kabuleta reasons that anybody who stood for public office and didn’t go through is welcome into NEED.

“It’s that simple. So, we have a big group of people who have influence and ideas but no office. Their office until the next election will be NEED, and we shall gauge our success by how much the electorate is enlightened about the resources in their respective sub-regions. And how they hold the exploiters of those resources accountable.”

What is without doubt is that NEED, regardless of its influence, will cause some disruptions with politicians on either sides of the divide. So, how NEED will work with ‘friendly’ forces in opposition will be critical.

“We cannot be a threat to anyone’s seat in parliament because the next election cycle is far away. We are creating a platform for topical discussion to cover the thousands of politicians who currently have none. Therefore, we have little interest in people who are currently in parliament because they have that recognized podium for discourse. So it’s the ‘losers’ we are interested in, not those who won,” he said

Lastly, Kabuleta, who was briefly arrested during the presidential election campaigns, insisted that they are ready for the state’s clampdown on activities seen as disruptive.

“All the state machinery combined cannot stop us from talking, and enlightening people. We have control over our mouths and minds and they can only wrestle that from us through various diversions, and they’re experts at that. But as long as we stick to our theme, there is little they can do.”

0 #1 WADADA rogers 2021-10-06 11:57
Joseph Kabuleta is the new kid on the block positioned to try and confuse the opposition with his National Economic Empowerment Dialogue.

We all know that Kabuleta is a right hand man to the self styled Prophet Mbonye- a known NRM sympathizers, how can you trust these guys to foment ideas to propel the opposition, nze nviridemu awo
Report to administrator