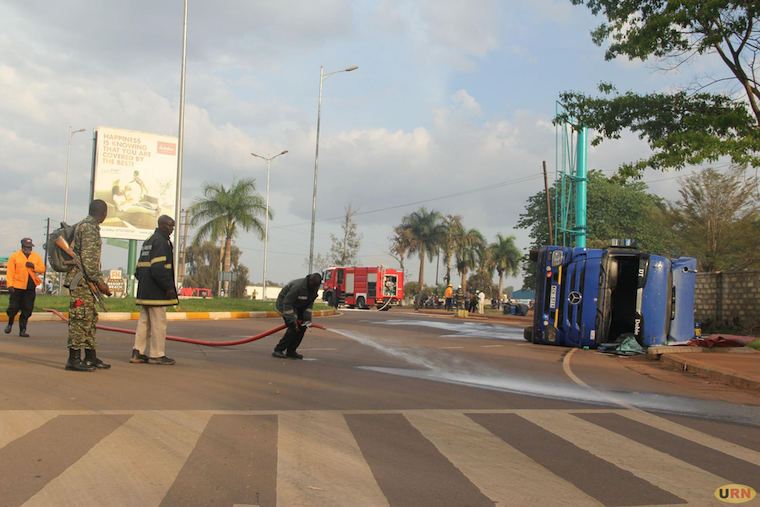 Police are still struggling to remove a Kenyan registered fuel truck that overturned at the Nile bridge roundabout in Njeru Municipality, Buikwe district on Monday evening.

Traffic has since been diverted to the old bridge to pave way for the rescue efforts. Two travellers who were aboard the ill-fated fuel truck sustained serious injuries and were evacuated to Jinja Regional Referral hospital emergency unit for further management.

The truck has since spilled fuel at the entire junction connecting to the Nile bridge. Police officers from the fire and rescue services unit have cordoned off the scene to avert any possible accidents, which would result from the excessive fuel spillover.

Traffic police, field force unit personnel and UPDF officers have deployed to restrict access to the Nile bridge. Only those mandated to secure the scene are being allowed through. Some officers are being seen emptying the fuel truck with the aim of stopping the oil spill into the neighbouring factories.

Raymond Musasizi, a rider says that since the accident occurred during rush hours, it led to abnormally heavy traffic congestion along the old bridge. Badiru Kitimbo, a motorist within Jinja city, says that the roundabout area is not well leveled which has made it a black spot for endless accidents.

Meddie Ssembatya, another rider says that five motorcyclists have been involved in serious accidents at the same spot in a period of one week. Ssembatya further says that much as engineers are seen repairing spots within the roundabout area on a daily basis, not much has been done to avert accidents.

Mary Nantaba, a first aid provider attached to the Uganda Red Cross Society, says that their teams have pitched camp at the scene, so as to boost police rescue efforts.

Hellen Butoto, the Ssezibwa Regional police spokesperson, says that the accident victims are out of danger. She says that police has teamed up with other partners to ensure that the fuel truck is removed from the scene in the shortest time possible.