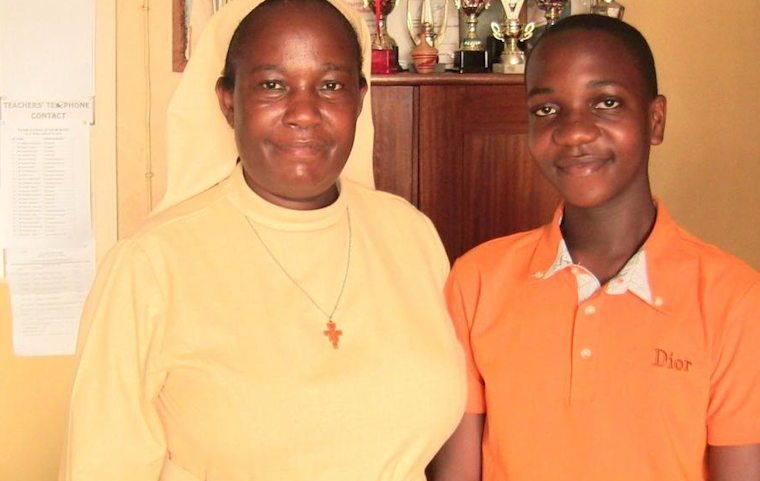 Nathan Mckenzie, the chief operating officer of the Royal Commonwealth Society officially announced Mufuma as the winner of this year's competition on September 28.

During the virtual declaration by the Commonwealth essay writing committee in London, Mckenzie noted that Mufuma's piece was unanimously chosen by the panel of judges ahead of the others because of its perfect storyline, natural taste, and exceptional facts presented in poetry under the theme 'Community in the Commonwealth.'

Now, Mufuma says President Museveni should not only stop at awarding sports gold medalists but also him because he also raised the Ugandan flag high.

"We see so many of these people; the Cheptegei, the Chemutai, Kiprotich, who have done it and have even come back with gold medals, so I also want to have that dinner with the president. I also want to be appreciated by the president or even his wife the minister of Education Hon. Janet Kataha such that they may also appreciate me for this unusual thing I have done. I have broken a record for my country, Uganda. Being the best in the junior country in Africa, and being the very first African child to win the junior category is something outstanding. So I feel I should be appreciated by the government especially the president because it will bring history in my life," said Mufuma.

Mufuma says when meets the president, he will ask him for a scholarship that will help him become a cardiologist. He wants to save the parents of children born with heart complications from the hustle of flying to India for surgeries because he believes he will be able to do what the cardiologists in India do, here in Uganda.

Sr. Immaculate Nabukalu, Mufuma’s headteacher, says it has taken 138 years for the first African to win QCEC. She says it’s worthy for this continental success to be celebrated.

"He's the first African child to win this competition started in 1883 but since that time, no African child has ever shown or proved that he has the skills of writing. It is 138 years, and our child of Uganda has won the competition. So we want to congratulate our country Uganda because when the results were being read, they didn't say Mufuma of Namilyango Junior Boys, the message was sent to the embassy, the high commission here in Uganda to say; 'Uganda has won.' So this achievement is for this great country Uganda, this achievement is for the continent that we must celebrate," said Sr. Nabukalu.

She says schools must stop putting emphasis only on seeing pupils and students pass with distinctions, but focus on developing all the children’s skills that will help them stand out whenever they go.

Moses Kibuuka, Mufuuma’s teacher says English language teachers must also help their learners to speak, write and compete. He says learners should also be made to love the language.

"If you trace the history of language, language is supposed to be trained and written. It is only that in Uganda, we limit ourselves to passing exams, and then that is the end of the success. So, this victory is telling the rest of the world that when you're training children language, let them speak and let them write and let them compete. Because when you weigh yourself on a competiting scale is when you can tell this is where I stand. So it is not a one-day thing that you come and bump into things and the victory is upon you. No, it is something you do with children. It is building, it is not like you complete the syllabus and then you bring exams. This is an art," said Kibuuka.

Mufuma says it took him over a month developing his award-winning piece 'Okware Our Pandemic Epic'. under the topic 'Tell a story of how you or someone you know helped others during the pandemic.'

The Queen's Commonwealth Essay writing competition is the oldest essay writing competition for schools in the world. Every year, participants from all Commonwealth countries and beyond, take part in both the junior category which has participants below 14 years, and the senior category of 14-18 years. Submissions are made by 30th June and the results take about three months to be released.

The winner and runners-up in each category win a trip to London where they spend a week touring different sites before gathering for the prize-giving ceremony. In Uganda, only 48 learners participated in the 2021 edition.

+2 #1 Lakwena 2021-10-04 09:15
Conflagrations Ethan Charles Mufuma, but be careful with trying to meet a callous president who is notorious for embarrassing not only his VIP hosts and guests alike.

E.g.: as a guest of honor, Gen Tibuhaburwa recently and disrespectfully and dismissively embarrassed URA during their 30th-year anniversary.

The following week, and as if that was not nasty and ugly enough (with URA); during the former CJ, Ben Kiwanuka' Memorial Lecture, Gen Tibuhaburwa disrespected the occasion and turned quarrelsome and nasty to his Host, the Judiciary over his displeasure for granting bail to capital offenders.

In other words, if the occasion is allowed; Ethan Charles Mufuma,and the rest Ugandans should not be shocked if the Dictator embarrassed our Super Star for not being a "Scientist" instead of writing nonsense about "Okware Our Pandemic".

Have you heard of Oprah; that' where the 'juice' is; she will publish your work and distribute it worldwide.
Report to administrator
0 #3 WADADA rogers 2021-10-04 18:03
You see, this is the danger of having a President who wants to be in charge of everything, now this kid, young as he is meeting Museveni for what, as a national hero?

i would be expecting him to push his way into meeting the Queen
Report to administrator
+1 #4 kabayekka 2021-10-04 19:52
Lakwena you have a point. These days what you ask is what you get. Of course when the President vomits his nonsense this kid might love to go back home and write about it in his famous ways.

Like he has written his poem on that beautiful African lady Okware. Really no one should be bothered if one is trying to tell the truth of the matter.

Some doubters asked Jesus, what is the meaning of truth? And in the middle ages, the Catholic Pope and his believers used to support the science idea of the earth as existing like a flat table.
Report to administrator