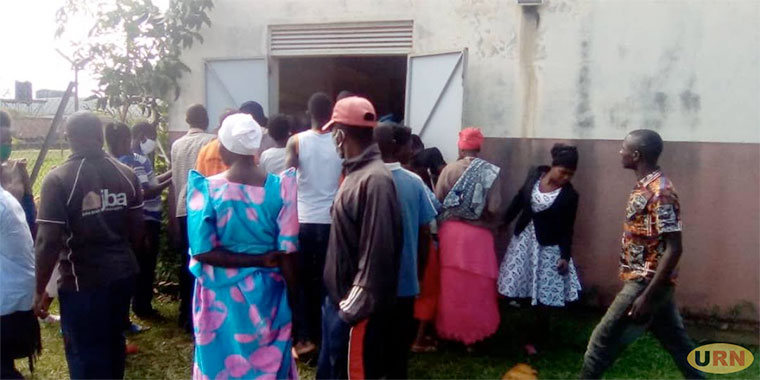 Relatives of the deceased converge outside the Kamuli general hospital mortuary

Residents of Kadungu A village in Namusagali sub-county in Kamuli district have lynched Francis Kasolo, the officer in charge of Busitema police post for alleged shooting dead one of their own.

Kasolo met his death on Sunday evening after shooting dead Yosam Namwindo. It all started when Namwindo allegedly hired traditionalists who accused his neighbours Alex Muyinda and Joseph Oju of bringing evil spirits that were traumatizing the whole village and causing misfortunes.

This enraged residents who attempted to lynch Muyinda and Ojo. This prompted Kasolo and his colleague to intervene and rescue the situation. However, the angry residents accused security personnel of shielding wrong elements and decided to pelt them with stones.

Police retaliated by opening fire leading to Namwindo’s death. This angered the residents prompting them to confront the security personnel. They grabbed Kasolo from the police patrol vehicle and lynched him.

Asuman Dhabasadha, one of the residents says that police took long to send more personnel to the scene of the crime.

“There was a big scuffle but only Kasolo and another plain-clothed policeman were present at the scene. Kasolo shot at Namwindo due to continuous attacks from the community. Officers from the main station only showed up to reinforce his efforts at about 5:30 pm. Although he attempted to jump on the police patrol vehicle, the residents pulled him off and lynched him,” he said.

Busoga North police spokesperson, Michael Kasadha has confirmed the incident adding that they have since recovered two AK-47 guns, which the residents grabbed from the police officers. He says that operations are still ongoing with the aim of arresting the mob members.

In deed. A complete Commander rushing to an emergency call with only one officer (who as well have been by him by default as his personal body guard) is incredible.

HE COMMANDED HIMSELF TO SHOOT AND KILL.
Report to administrator
0 #3 kabayekka 2021-09-27 23:38
If this policeman had no guns with him and only the goodwill of the communities, he would have been able to see another day.

Most countries only call in the armed police unit when the police officers experience tremendous violence. These days most of the modern police use an electric shock device called a taser.

It seems in Africa it is still a political fashion or a show off for the police to walk about with the civilians in public with a war machine of AK47!
Report to administrator