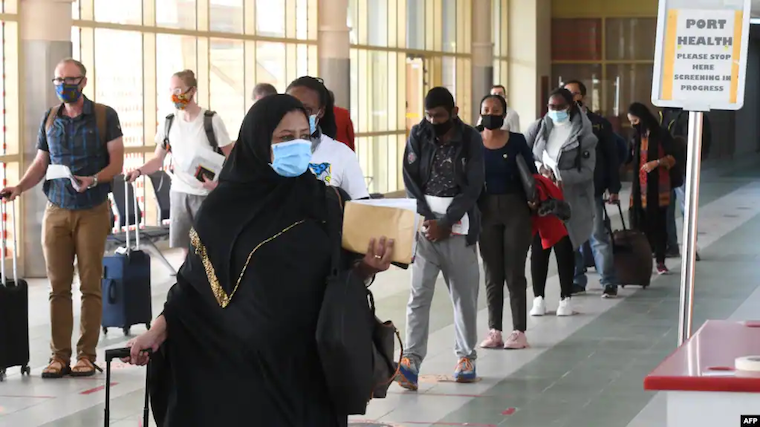 FILE Travellers at Jomo Kenyatta airport, Kenya. Kenya says it is treating the 89 deaths in Saudi Arabia as suspicious

Kenya’s Foreign ministry says 89 Kenyans, most of them domestic workers, have died in Saudi Arabia in the past two years.

Saudi authorities told their Kenyan counterparts that most of the deaths were from cardiac arrest. But abuse of foreign domestic workers has long been a problem in Saudi Arabia and the Kenyan ministry this week admitted that it never conducted independent investigations.

“We have compared the deaths, so it's not possible that you have three deaths in Qatar, one in UAE, two in Kuwait, nine in Oman, two in Bahrain and you have 40-50 in the other country because the number may be larger but they are not that larger. It’s not possible that these young people are all dying of cardiac arrest,” Kamau said.

41 Kenyans died in Saudi Arabia in the last nine months, allegedly due to heart failure. Kamau blamed the ministry of Labour for failing to do its job and protect Kenyan workers.

With very little opportunity at home, many see working in Arab countries as a ticket out of poverty in a country where about 40 per cent of the population lives below the poverty line. Wachira Kabinga, a lawmaker and chair of the labour committee, said Kenyan labourers abroad need protection.

“This is priority number one for the work of this committee in the remaining period. If there are things that we would like to leave behind, is a proper and clear recommendation on what needs to be done in this particular area to ensure that our people are not living as slaves.”

Caroline Aluoch, 24, was among the 41 Kenyans who have died in Saudi Arabia this year. Aluoch signed an employment contract for two years as a domestic worker to earn tuition fees for the remaining two years of her education. Aluoch wanted to be a high school teacher.

Her sister, Beryl Awuor, told VOA before her death, her sister feared for her life. The mother of two got the sad news on May 5. She was told her sister had committed suicide but did not buy it.

“They did the postmortem in Saudi Arabia,” she said. “We suspect they beat her before killing her. We saw scratches on her face, she also had a deep cut around her chest. She was stuck with something.”

Awour said her family never received an explanation for that cut.

"Even the person who did the postmortem here did not explain it to us. I am still in the dark,” she says.

The family received Alouch’s death certificate and her passport. At least 100,000 Kenyans work in Bahrain, Kuwait, Oman, Qatar, Saudi Arabia and the United Arab Emirates, most as domestic workers or doing other menial jobs.

I call upon Kenya to use its military and economic might to sanction the regime until the 89 people come back to life. People Power, Our Power
Report to administrator
0 #3 Uncle Philosopher 2021-09-27 12:52
In Uganda the NRM gov't led by the greatest general all we care about is remittance to NSSF. Not such probes. And soon we want to compel all domestic workers abroad to pay PAYE.
Report to administrator