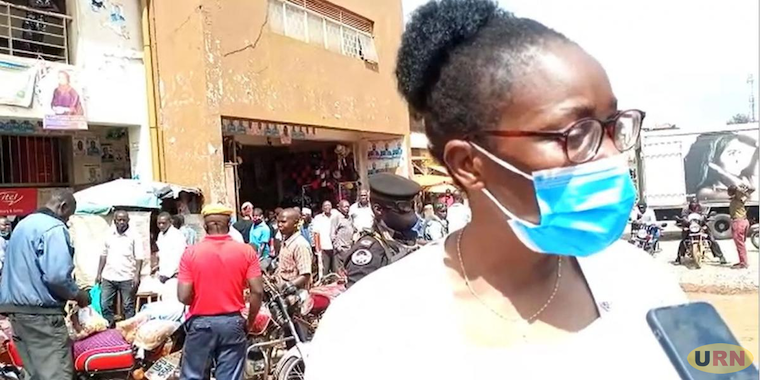 The minister of Lands, Housing and Urban Development, Judith Nabakooba has summoned Mbale city authorities and Dott Services over the slow and shoddy works on municipal roads.

Mbale city is implementing the second phase of the Uganda Support to Municipality Infrastructural Development (USMID) project. The contract was awarded to Dott Services and the works are expected to end by February next year.

The minister’s visit to Mbale follows a public outcry especially from vendors, who said that the slow progress of works on Cathedral and Naboa roads has made the roads impassable due to flooding caused by the ongoing rains.

Nabakooba said that the city officials from Mbale City Council, Dott Services, and USMID coordinators should meet her in Kampala next week to discuss the matter.

"[I have some summoned of them] over the road works that are not moving as expected, a lot of business is on standstill and there was tension. I decided to come on ground because I was already here to see what exactly is happening and how can we solve this matter because the project being disputed is under the ministry of Lands. There are concerns that is why I have decided to call for that meeting on Thursday in my office. We sit, agree and have a plan to fastback the civil works in Mbale city, look at the priority areas and how can they speed up the work because services are being disrupted and also urging them to improve on their working relationship with the communities because if the communities raise concerns and they are not listened to it cause some challenges," said Nabakooba.

The mayor Industrial City Division, Masaaba Muhamood Mutenyo claimed that Dott Services have such a bad track record and they wonder how it has been awarded all the contracts for the construction of roads in Mbale city.

"The other complaint that we have as leaders, we don't know how the procurement process is done but they gave us a contractor, Dott Services which has a very bad name here within the public. They don't have public relations with our people. These roads are being worked in in the Industrial city we're not involved, for them when they come, they take over the city as leaders they don't involve us to know what is going on so that we can be in position to explain to our people and they are the only contractors who have been given all the roads in the city. According to us, we think maybe, you have over-piled them," said Mutenyo.

Mbale Central Market chairperson, Ayubu Madoi appealed to the minister to task the contractor to prioritize completion of Naboa and Cathedral Avenue roads since business along the market street has been on a standstill for over five months.

Mario Christobal, the project manager Dott Services, says that the works are ongoing except for a few challenges like the rains. He however says that the road will be completed at the stipulated time.

Dott Services should have been blacklisted long ago for its garbage services/works done on all the road projects its been given but coz they have a godfather as one of its owner/directors the nrm corruption will always outweigh common sense and justice/the law
Report to administrator
0 #2 kabayekka 2021-09-26 13:16
Surely if this Dott Services is NRM, Mbale is a constituency of NRM.

And NRM has been placing this country into a constant lockdown with an everlasting curfew to go with it.

Such stringent measures of African pandemic lockdowns do not stop tropical heavy rains to fall! Advice has always been provided to this government for road contractors to work during the night when traffic is at a minimum rate of flow.

As long as these contractors have got the lighting and the heavy machinery by the morning, much of their day work would have been done to allow traffic to resume.

It is hoped that the electricity board can come to some sort of arrangement to provide a temporary grid connection.
Report to administrator
-1 #3 Akot 2021-09-26 13:21
Quoting MR:

You just have to wonder what is wrong with Uganda.

I will add; What is wrong with Ugandans?

Why are Ugandans ensuring Museveni's 40 years, then legalise him with yet another fake election to ensure 45 years?

Why do Ugandans, tribally divided & weak, keep on bolstering Museveni with fake elections, knowing very well no other than him will win?

But why do Ugandans legalise the lifetime ruler with parliamentary elections to keep the useless parliament open, when mps are payed for doing NOTHING for electorat?
Report to administrator
+2 #4 WADADA rogers 2021-09-26 21:40
Dott Services has never delivered anything on time, reason is that they are untouchable, they are well connected.

Nabakooba is aware of this but she is busy pretending as if she intends to take any action.
Report to administrator
-1 #5 Lakwena 2021-09-27 09:17
But isn't there a limit to a Minister terms of reference (docket)?

In what capacity does Hon Nabakooba summon Dott Services over their snail-pace roadwork?

In other words, it is only in Uganda where there is no limit what a Minister/government officer can do, or should not do. As a result, there are so many busybodies allover the place.

E.g., you find Busybody Prime Minister, Nabanja everywhere, throwing her weight around; screaming and busy doing the work of the Minister of Disaster and Unpreparedness.

She has even arbitrarily started dishing out naked cash (our bloody) money on the streets and/or disaster areas.

Otherwise Hon Nabakooba, where is the Minister Works and Transport? Where Allen Kagina & Co., are they sleeping on job or what?

In the recent past, the former Speaker of Parliament, the Rt Hon Kadaga was everywhere like UPC, interfering and overdoing other people's work.
Report to administrator